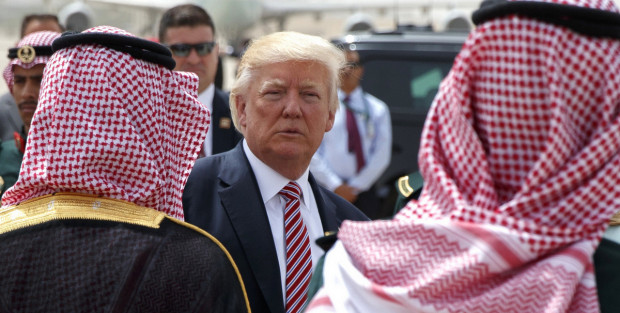 US Provides Military Aid To 70 Percent Of World’s Dictatorships

Above Photo: Top photo | U.S. President Donald Trump boards Air Force One for Israe from Saudi Arabial, the next stop in his international tour, at King Khalid International Airport, Monday, May 22, 2017, in Riyadh. (AP/Evan Vucci)

About three-quarters of the world’s dictatorships currently receive military assistance from the United States. This is a strange record for a nation that consistently justifies its sweeping foreign interventions as aimed at “promoting democracy” and “thwarting evil dictatorships.”

In the Cold War it was “He may be a son of a bitch, but he’s our son of a bitch.” Current analysis shows the U.S. militarily assisting dictators the world over, calling it “promoting democracy,” and disingenuously wondering why it’s all going so badly.

For much of its history, the United States government has explained or defended its intervention in the affairs of other nations by framing such behavior as necessary to “promote democracy” abroad and to thwart the advance of “evil dictators.” While the use of those phrases has hardly dwindled over the years, establishment figures have been forced to admit in recent years that the U.S.’ democracy promotion efforts haven’t gone quite as planned.

For instance, last year, Foreign Policy published an article headlined “Why is America So Bad at Promoting Democracy in Other Countries?” There, Harvard professor Stephen M. Walt noted that most of the U.S.’ democracy promotion efforts abroad end in failure, with nearly a quarter of the world’s democracies having been degraded in the past 30 years. Though Walt blames the U.S.’ muddled history of military interventions for failing to spread democracy, a new analysis suggests that the reason for this troubling trend is not that democracy wasn’t promoted the “right” way, but rather that democracy was never meant to be promoted at all.

By the numbers: U.S. backs three of every four dictators

Rich Whitney, an attorney and writer, sought to compare Freedom House’s rating system of political rights for 2015 to the U.S. government’s provision of military assistance – military training, military aid and weapons sales – to foreign nations that same year. Whitney’s stated goal was to determine whether the U.S. government actually opposes dictatorships and champions democracy at a global level, as is often claimed. His independent analysis found that the U.S. has actually manifested the opposite of its stated intention, by providing military assistance to 36 of the world’s 49 dictatorships. In other words, more than 73% of the world’s dictatorships currently receive military assistance from the United States.

For his analysis, Whitney used a commonly accepted definition of dictatorship: “a system of government in which one person or a small group possesses absolute state power, thereby directing all national policies and major acts — leaving the people powerless to alter those decisions or replace those in power by any method short of revolution or coup.” He chose Freedom House’s Freedom in the World annual reports, citing it as the best source for a comprehensive list of dictatorships and “free” societies. Whitney, however, noted that the ostensibly independent organization has a “decidedly pro-US-ruling-class bias.”

Freedom House’s bias makes the results of Whitney’s analysis even more damning. The organization is funded by a combination of Western government and nongovernmental-organization sources, including the George Soros-funded Open Society Foundations. Thus, its categorization of nations as dictatorships or as free societies is largely analogous to how the U.S. State Department classifies such nations — meaning that U.S. monetary support of such dictatorships is a knowing and willful repudiation of democracy promotion abroad.

Furthermore, many of the nations labeled as dictatorships by Freedom House are rivals of the United States, and thus tended to be labeled dictatorships even though they are not. For example, both Iran and Syria were labeled dictatorships even though Iran held democratic elections earlier this year and Syrian president Bashar al-Assad was re-elected in 2014 with 88.7% of the vote. Russia, the eternal rival of the United States, is also considered a dictatorship according to Freedom House despite the fact that elections regularly occur there. If these three nations were removed from list, the U.S. would then support upwards of 78% of the world’s dictatorships.

In addition, other decidedly undemocratic nations that receive large amounts of U.S. military aid were not included as dictatorships in the Freedom House report and thus in Whitney’s analysis. For instance, Israel receives over $10 million in U.S. military aid every day despite the fact that all Palestinians living within its borders are disenfranchised and subject to either concentration-camp conditions or imposed military rule.

Though this analysis of the government’s own data and data from a pro-Western think tank has revealed the U.S.’ far-reaching support for dictatorships around the world, such a revelation is unlikely to change anything about the U.S.’ long-standing modus operandi. For of course U.S. support for dictators is nothing new: many Cold War-era dictators, particularly in Latin America and Asia, were installed and backed with full U.S. government support despite their despotism, in order to allow the U.S. to “contain” communism and Soviet influence.

Ultimately, “democracy promotion” was never the true intent, but instead the disguise to mask the imperial conquest of nations that refused to acquiesce to U.S. government demands. For that reason, the notable military interventions of recent decades — particularly Afghanistan, Iraq and Libya — were sold to the U.S. public as being born out of the need to “restore” democracy and wrest control from “evil dictators.” That narrative continues to be used to justify pushes for regime change abroad, even though the U.S.’ self-image as the world’s greatest democracy hangs in tatters.