… to deflect from Trump administration failures.

A widely disseminated and highly dubious story asserting China concealed tens of thousands of deaths originated from a US government propaganda outlet and a veteran member of a right-wing anti-China cult.

As the United States suffers from the worst coronavirus outbreak in the world, President Donald Trump has insisted that if his administration manages to keep the death toll to 100,000, they’d be doing a “very good job.” To deflect from the unconscionable failures and deceptions that allowed the pandemic to spread deep into the US population, the White House has launched a blame-shifting PR campaign targeting China. At the heart of Washington’s narrative is the accusation that Beijing orchestrated a “cover-up” that is responsible for the disastrous situation in the US.

Having zealously demonized China while it battled the worst of the coronavirus crisis, corporate US media is seizing on the effort to redirect American outrage onto a foreign bogeyman. Even as it alleges that the US coronavirus response is being “undermined” by Chinese and Russian “disinformation”, the US press is in fact, promoting obscene conspiracy theories claiming that China’s coronavirus death toll is higher than the official count by an order of tens of thousands.

The claim about tens of thousands of hidden deaths appears to have been first reported by Radio Free Asia (RFA), a US government news agency created during the Cold War as part of a “Worldwide Propaganda Network Built by the CIA”, according to the New York Times. RFA is operated by the Broadcasting Board of Governors (BBG), a federal agency of the US government under the supervision of the State Department. Describing its work as “vital to US national interests,” BBG’s primary broadcasting standard is to be “consistent with the broad foreign policy objectives of the United States.”

In an article published on March 27, RFA makes the damning and explosive claim that China’s coronavirus-related deaths are far higher than the official figure, accusing government officials of perpetrating a cover-up. Unsurprisingly, RFA’s evidentiary threshold for extraordinary claims about China is extremely low.

RFA relies on the “basic math” of “some social media posts” to conclude that “estimates show” 42,000 to 46,800 people died from COVID-19 in Wuhan, the epicenter of China’s coronavirus outbreak. These numbers far exceed the official death totals of 2,548 for Wuhan, and 3,312 for the country as a whole. This would be akin to Chinese state media outlets making claims about the US on the basis of anonymous posts found on the dark recesses of Twitter. Oddly, none of the social media posts RFA referred to were quoted in its article.

RFA’s “estimates” are based on morbid speculation regarding the cremation capacity of Wuhan’s funeral homes. RFA cites a story by the Chinese media outlet Caixin on funeral arrangements being made by Wuhan residents during the crisis. On March 26, Caixin reported that 5,000 cremation urns had arrived at a mortuary in Wuhan over a two-day period. This is treated as nefarious evidence of Chinese government deception solely because it exceeds the official death total in Wuhan.

RFA completely ignores the fact that residents have continued to die from other causes during the pandemic, as well as the backlog in funerals and cremations caused by the city’s several month long lockdown. In 2019, approximately 56,000 cremations took place in Wuhan, according to the city’s official statistics.

That means that roughly 4600 residents died per month, a figure that was likely higher during the winter months and with Wuhan’s health care system overwhelmed by the outbreak. With Wuhan under lockdown since January 23, a substantial increase in the use of funeral homes and crematoriums should have been expected.

Wuhan reported only about 2,500 #coronavirus deaths, but 5,000 urns were delivered to one mortuary over just 2 days. “Wuhan has seven other mortuaries.” https://t.co/32sIwcJYRq @shanghaiist

Washington has seized on the conspiracy theory to boost efforts to deflect attention away from its mishandling of the coronavirus outbreak. Shortly following these media reports, US intelligence agencies stated that they had “concluded” that “China’s numbers are fake” with respect to coronavirus infections and deaths. These findings were based on a “secret report” prepared for the White House — the contents of which the intelligence apparatus has declined to reveal.

While RFA did not disclose the source of its claims, they appear to originate from the far-right, anti-government Chinese cult, Falun Gong. In VICE’s report on the “urns” story, they cite a tweet by veteran cult member Jennifer Zeng, in which she makes outlandish claims regarding China’s coronavirus infection and death totals. It is important to note, Zeng’s tweet, dated March 26, was published one day prior to RFA’s initial article.

How many people died in #Wuhan and #China?
Conservative estimation based on numbers of urns being given out at 8 crematoriums in Wuhan by financial analyst @charles984681
Total death in Wuhan: 59K
Total death in China: 97K
Total infection in China: 1.21 M#CCPVirus #COVID2019 pic.twitter.com/epvvy9dAXn

Zeng is a longtime member of the far-right cult, Falun Gong, having joined the group in 1997. As Ryan McCarthy reported for The Grayzone, Falun Gong’s followers believe that “Trump was sent by heaven to destroy the Communist Party.” The group also believes that modern science was invented by aliens as part of a scheme to take over human bodies; that feminism, environmentalism, and homosexuality are part of Satan’s plan to make us into communists; and that race-mixing severs our connection to the gods.

Since 2001, Zeng has worked as a reporter for Falun Gong’s propaganda arm and ardently pro-Trump media network, The Epoch Times. An NBC News exposé in August 2019 found that the organization spent over $1.5 million on approximately 11,000 pro-Trump advertisements in just six months, “more than any organization outside of the Trump campaign itself, and more than most Democratic presidential candidates have spent on their own campaigns.” 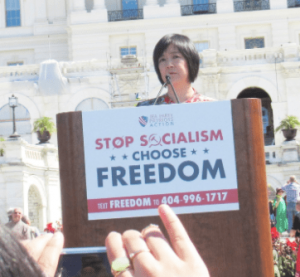 Zeng speaking at a rally organized by the Tea Party Patriots on September 19, 2019

Zeng has joined American far-right forces working to oppose rising progressive and socialist movements in the US. At a “Stop Socialism, Choose Freedom” rally organized by the Tea Party Patriots in Washington DC in September 2019, Zeng delivered a tirade called, “I Escaped ‘Socialism with Chinese Characteristics’; I Don’t Want to Live under Socialism again in the US.”

“I don’t want to live in any sort of socialism again.” Zeng declared before the crowd. “But here in the US, I am starting to feel like it has followed me.”

Zeng writes that Chinese people view Trump as their “powerful grandpa” and hope that he “ends the Chinese Communist Party” in the same way former US President Ronald Reagan “[got] rid of the Communist Party in Soviet Union”.

Wishing for China to return to a state in which it is dominated by the West, Zeng advocates for the US to “regulate China’s behavior […] with American standard, American rules, and American norms, which are, of course, also the universal norms of the free world.”

The recent wave of accusations that China is concealing its coronavirus-related death totals is just the latest instance of the corporate media’s denigration of the Chinese response to the outbreak, as documented by Alan MacLeod for Fairness and Accuracy in Media and independent researcher Amanda Yu Mei-Na.

In stark contrast to the denunciations of the U.S. establishment, leaders of the World Health Organization (WHO) have lauded China’s efforts to combat the coronavirus pandemic and suggested that the world follow its lead.

“In the face of a previously unknown virus, China has rolled out perhaps the most ambitious, agile and aggressive disease containment effort in history,” read the report of the WHO mission of 25 international medical experts which travelled to China to investigate the COVID-19 outbreak in February 2019. “China’s bold approach to contain the rapid spread of this new respiratory pathogen has changed the course of a rapidly escalating and deadly epidemic.”

“If I get COVID, I’m going to China,” said Dr. Bruce Aylward, the WHO’s Assistant Director-General and head of the agency’s COVID-19 mission. “They know how to keep people alive.”

“What I saw was a tremendous sense of responsibility, and of duty, to protect their families, their communities, and even the world, from this disease,” reflected Aylward. “I left with such a deep sense of admiration for the people of Wuhan and for Chinese society in general.”

The WHO has categorically rejected accusations that China was responsible for the global spread of the COVID-19. According to Director-General Dr. Tedros Adhanom Ghebreyesus, “[China’s] actions actually helped prevent the spread of coronavirus to other countries.”

Dr. Michael Ryan, Executive Director of the WHO Health Emergencies Program, echoed these sentiments, saying the agency has “never seen the scale, the commitment of an epidemic response at this level” and that China was “taking extraordinary measures in the face of what’s an extraordinary challenge.”

Tragically, Washington and US corporate media appear more determined to deflect blame for their completely inadequate response than in protecting Americans from a pandemic. With their bellicose and increasingly overheated claims about China’s response, they are setting the stage for another global crisis. As two Trump administration officials recently told a reporter, “Trump is furious [at China] and wants action.”

Ajit Singh is a lawyer and journalist. He is a contributing author to Keywords in Radical Philosophy and Education: Common Concepts for Contemporary Movements (Brill: 2019). He tweets at @ajitxsingh.