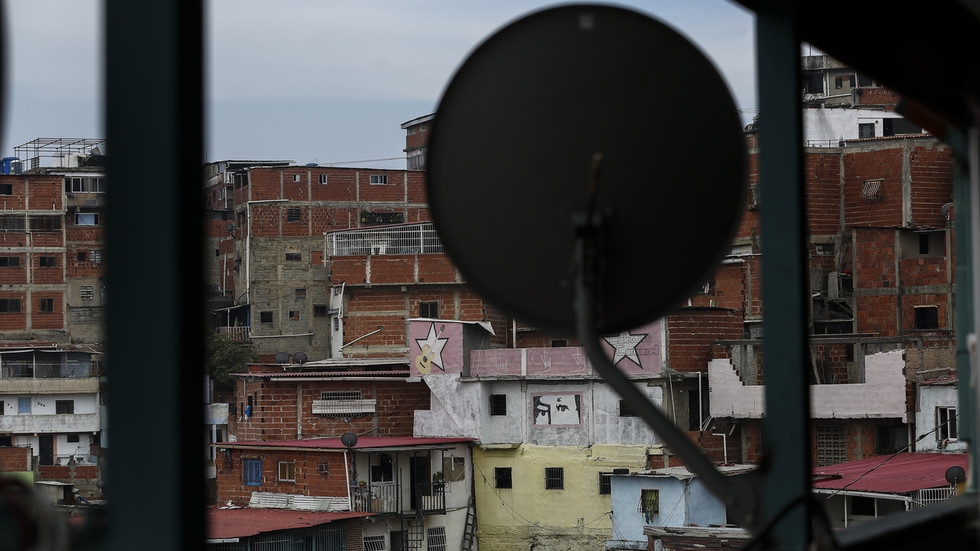 Above photo: An antenna is located on a terrace after the US television satellite operator DirectTV announced its withdrawal from Venezuela. Pedro Rances Mattey / Getty Images.

NOTE: Sign the petition calling on the Biden administration to end the economic war at SanctionsKill.org/petition. And join us on Saturday, February 27 at 4:00 pm Eastern/1:00 pm Pacific for a training on the new Sanctions Kill toolkit.

In its regime-change effort in Venezuela, the US has imposed devastating sanctions that have caused tens of thousands of deaths among the most vulnerable – without ever coming close to toppling the president.

Alena Douhan, the UN Special Rapporteur on unilateral coercive measures and human rights – a new position created by the UN Human Rights Council in March of 2020 – issued a stinging preliminary report last week condemning US and EU sanctions against Venezuela. Ms. Douhan has urged the US, EU and other nations to drop all sanctions against Venezuela after her two-week fact-finding mission to the country.

As the report explains, sanctions were first “imposed against Venezuela in 2005 and have been severely strengthened since 2015 . . . with the most severe ones being imposed by the United States.” According to Ms. Douhan’s report, these “sanctions have exacerbated pre-existing economic situations and have dramatically affected the whole population of Venezuela, especially but not only those in extreme poverty, women, children, medical workers, people with disabilities or life-threatening or chronic diseases, and the indigenous populations.” In short, the sanctions are hurting the most vulnerable of Venezuelan society.

The report continues: “Lack of necessary machinery, spare parts, electricity, water, fuel, gas, food and medicine, growing insufficiency of qualified workers many of whom have left the country for better economic opportunities, in particular medical personnel, engineers, teachers, professors, judges and policemen, has enormous impact over all categories of human rights, including the rights to life, to food, to health and to development.”

Ms. Douhan’s conclusions echo those of other studies focusing on the human costs of sanctions against Venezuela. For example, the Center for Economic Policy Research (CEPR) concluded in a 2019 report that, in one year alone (2017-2018), at least 40,000 Venezuelans died as the result of the shortage of food and medicines caused by US sanctions. For his part, former UN expert Dr. Alfred de Zayas estimated in March of 2020 that at least 100,000 Venezuelans have died due to US sanctions.

In her preliminary report, Ms. Douhan emphasized “that unilateral measures are only legal if they are authorized by the UN Security Council, or used as countermeasures, or do not breach any obligation of states, and do not violate fundamental human rights.” The current sanctions regime does not meet any of these criteria and is therefore illegal. Ms. Douhan “called on the countries to observe principles and norms of international law and reminds that humanitarian concerns shall always be taken into account with due respect to mutual respect, solidarity, cooperation and multilateralism.”

The grim conclusions of Ms. Douhan’s study come just as the New York Times is reporting that the political opposition in Venezuela – the opposition which the sanctions are meant to coerce the population into supporting – is falling apart. As the Times explains, the crowds which came out to support the opposition figure which the US anointed as “interim president” in 2019 – Juan Guaido – “are gone, many international allies are wavering, and the opposition coalition is crumbling.”

And the Times reports that the sanctions against Venezuela are not helping the opposition’s cause precisely because of the suffering they are exacting on the population. As the Times explains, “American sanctions designed to assist Mr. Guaidó have gutted government revenues but also forced citizens to focus on daily survival, not political mobilization.”

In short, there seems to be no doubt that the sanctions are undermining the humanitarian situation in Venezuela, are illegal and are not even reasonably calculated to bring about the regime change which they are intended to achieve. This begs the question of why the US continues to pursue this cruel and counterproductive policy.

Thankfully, some in Congress are indeed asking this very question, and have asked in a letter to President Biden that he reconsider such sanctions, particularly in light of the world-wide Covid-19 pandemic. Thus, “citing Biden’s announcement on his second day in office that his administration would review all existing U.S. sanctions and their impact on the pandemic,” a group of 27 progressive lawmakers argued in the letter (pdf) that “‘it is both a moral and public health imperative that our efforts to combat Covid-19 are global in scope because the pandemic’s economic consequences require international cooperation.’”

As the Congressional members explained in their letter which echoed many of the concerns raised by the UN Special Rapporteur:

Far too often and for far too long, sanctions have been imposed as a knee-jerk reaction without a measured and considered assessment of their impacts. Sanctions are easy to put in place, but notoriously difficult to lift. And while they have demonstrably harmed civilian populations, caused authoritarian governments to further constrict civil spaces and repress civil and political rights, squeezed the ability of humanitarian organizations to provide support during crises and disasters, made basic staples such as food, medicine, and gasoline prohibitively expensive, created and fueled black market economies, and driven our rivals deeper into dependency on one another, we have historically not conducted regular assessments to determine how sanctions connect to the policy outcomes they seek to achieve so that it’s often difficult to demonstrably prove their net benefit to national interests and security

Hopefully, President Biden will heed this sage advice and end the sanctions against Venezuela in the interest of humanitarianism and, frankly, common sense. However, it is my firm belief that he will only do so if there is concerted pressure among his constituency. Thus, as the Times explains, every indication so far is that Biden is still dedicated to the regime-change aims and strategy of his predecessors, Barack Obama and Donald Trump. As the Times reported – inexplicably with seeming approval – “[a]t his confirmation hearing last month, Secretary of State Antony J. Blinken said he did not plan to open negotiations with Mr. Maduro and made clear that Washington would continue to recognize Mr. Guaidó as Venezuela’s leader.”

As the Congressional letter cited above rightly pointed out, old habits die hard, even when contradicted by rationality, the requirements of the law and basic human decency. It is up to the American people to demand a change of course in these policies which do nothing but cause human suffering and which debase us as a country.

Daniel Kovalik teaches International Human Rights at the University of Pittsburgh School of Law, and is author of the recently-released No More War: How the West Violates International Law by Using “Humanitarian” Intervention to Advance Economic and Strategic Interests.