US Silent When Syrian Rebels Use Pepper Chemical Weapons

Above Photo: In this photo released by the Syrian official news agency SANA, shows a man receiving oxygen through respirators following a suspected chemical attack on his town of al-Khalidiya, in Aleppo, Syria, Nov. 24, 2018. Some 50 civilians were being treated following a suspected poison gas attack by Syrian rebel groups on Aleppo. SANA | AP

ALEPPO, SYRIA — On Saturday evening, a barrage of mortars filled with chemical weapons was launched into Syrian government-controlled territory in the Aleppo province by “rebels” linked to al Qaeda in the nearby Idlib province.

The attack – which was confirmed by both pro-government and pro-opposition sources – left over 100 civilians hospitalized after the gas released by the mortars caused “difficulty breathing, eye inflammation, shivering and fainting,” according to the head of the Aleppo Doctors Syndicate, Zaher Batal, as cited by Reuters. Batal and other Aleppo doctors suspect that chlorine gas was the substance responsible for the symptoms of those affected.

Despite the fact that chemical weapons were used by al Qaeda-linked militants in Idlib, the U.S. government and its allies have thus far been silent about the recent attack, even though the incident was covered by mainstream Western outlets such as CNN and Reuters. Instead, the U.S. announced a UN Security Council meeting — not to denounce the chemical-weapons attacks launched against civilians by an internationally recognized terror group but to address the recent hostilities between Russia and Ukraine over Crimea.

That attack was later found to have been staged, when reporters like Robert Fisk of The Independent visited the site of the area where the attack was alleged to have taken place and found no evidence of chemical weapons use.

The fact that al Qaeda-linked militants launched the current attack would be expected to provoke a response from the U.S. government, given that the U.S. has used al Qaeda as an excuse to launch military operations without congressional approval around the world following the 9/11 attacks in 2001.

Indeed, the group accused of launching the current attack is Hayat Tahrir al-Sham (HTS) — previously known as the al-Nusra Front, al Qaeda’s branch in Syria, prior to its name change last year. That name change allowed the group to evade the U.S. and Canadian governments’ terror watch list. MintPress recently reported that HTS had announced earlier this month that all Idlib rebels are now coordinating military operations through a “joint operations room” controlled by the al Qaeda-linked group. Prior to that frank admission from the group itself, the U.S. government as well as Western mainstream media had admitted that Idlib was dominated by al Qaeda-linked militant factions.

Given that the group responsible for the recent chemical attack is linked to al Qaeda — and given the U.S.’ past, aggressive responses to alleged chlorine gas attacks on civilians in Syria — one would think that the Trump administration would be swift to condemn the recent chemical-weapons attack on Aleppo civilians. However, as MintPress has noted in the past, the Trump administration has essentially turned a blind eye to al Qaeda both in Syria and Yemen in order to further its geopolitical agenda in those countries. 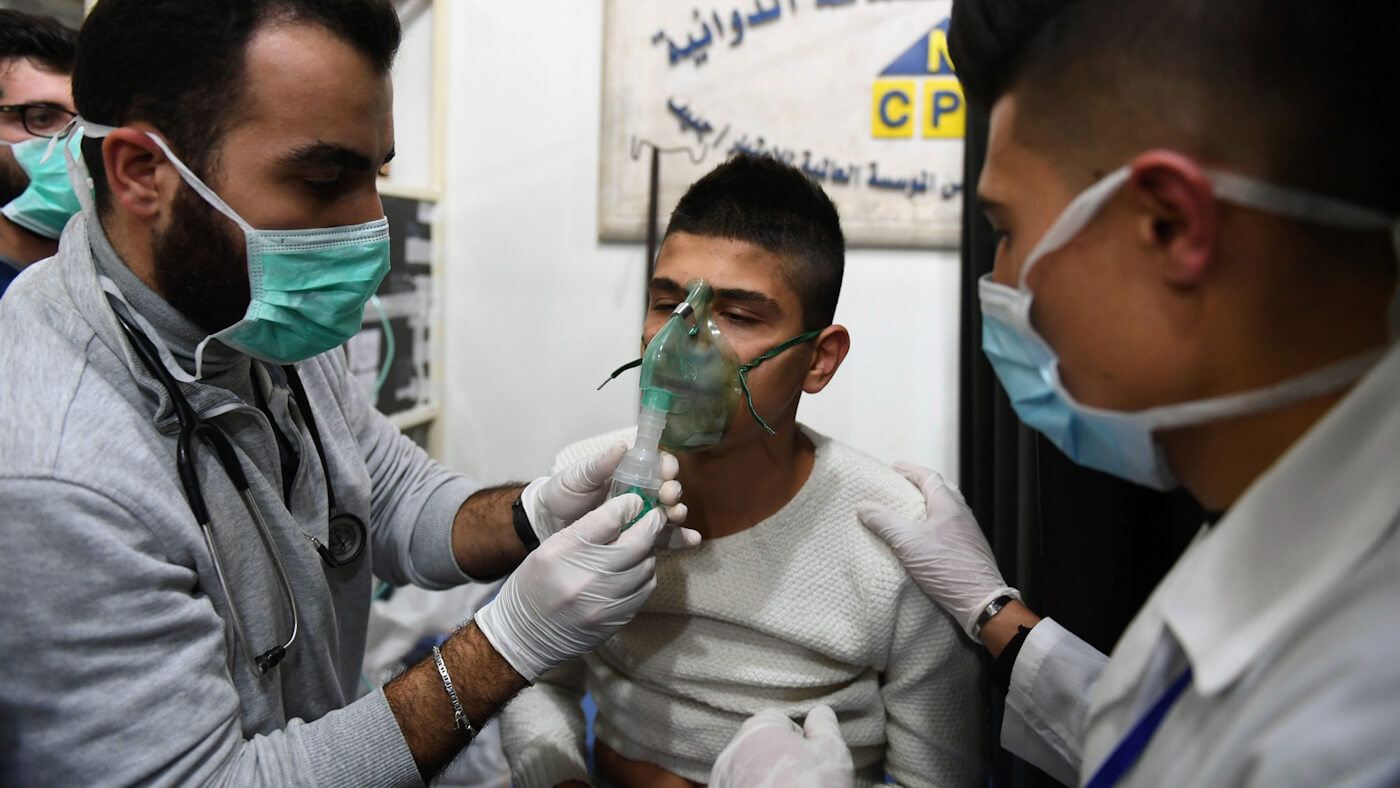 In Syria, the Trump administration has adopted a strategy of indefinite military occupation in Syria’s northeast, a major stronghold for extremist ‘rebel’ groups, that will not end as long as the “Iranian menace continues throughout the Middle East,” as National Security Adviser John Bolton put it this past July.

Furthermore, the Trump administration – despite admitting last year that Idlib is the “largest al Qaeda safe haven” since 9/11 – rushed to defend the province from a Syrian military operation back in September, claiming al Qaeda-linked militants were “not terrorists, but people fighting a civil war against a brutal dictator.”

Though Saturday’s attack was confirmed by both pro-opposition and pro-government sources, the White Helmets — the controversial “volunteer rescue group” that have accused the Syrian government of launching chemical weapons attacks in the past — have thus far remained silent on the attack and have made no call for international governments to target those responsible, as they have done in the past.

For those who have followed the reporting of MintPress and other outlets on the White Helmets, the group’s silence is unsurprising in light of the fact that they have shown themselves to be embedded with HTS and other extremist militant groups on several occasions and were also founded and funded by Western governments in order to further the Western- and Israel-backed plan for regime change in Syria. Thus it seems that the White Helmets are concerned about Syrian civilians being targeted with chemical weapons only when blame can be placed on the Syrian government.