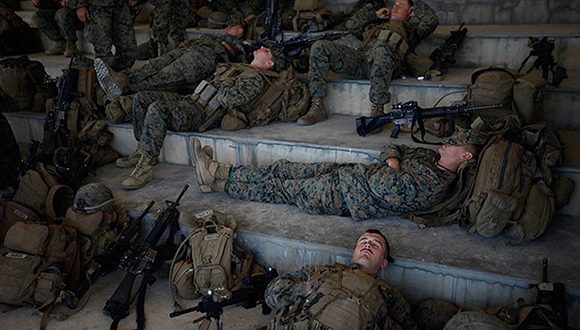 U.S. soldiers and contractors raped at least 54 Colombian girls between 2003 and 2007 in this Latin American country, recorded most of these abuses on video and sold them as pornographic material, according to the “Report of the Historical Commission on the Conflict and its Victims”, prepared by the Colombian government and representatives of the FARC guerrillas in the framework during the peace negotiations.

The 809-page document was developed to establish the “origins and multiple causes of the internal armed conflict” in Colombia. The role of the US military is revealed in the section “The international dimension of the social and armed conflict in Colombia: US interference, counter-insurgency and state terrorism”, written by Renán Vega Cantor, professor of the Department of Social Sciences at the National Pedagogical University.

The author argues that “there is abundant information about sexual violence, taking place with total impunity thanks to bilateral agreements and the diplomatic immunity of U.S. officials, which is part of a sexist and discriminatory behavior called ‘sexual imperialism’, similar to the conduct that occurs everywhere the U.S. military is stationed, such as in the Philippines, Japan or South Korea.”

According to Vega Cantor, “one of the most notorious cases” of abuses by the U.S. military against the local population occurred in Colombia, “in the town of Melgar and neighboring Girardot,” where “53 minors were sexually abused by mercenaries, who also filmed them and sold the tapes as pornographic material.” The professor adds that in addition, “at Melgar, a US contractor and a sergeant raped a 12-year-old girl in 2007.

Following the publication of the report in February 2015, The Daily Beast website has contacted the US Army to find out its position on the accusations made against the US military. Army spokeswoman Cynthia O. Smith has replied in an email that no credible evidence has been found so far, but said further investigation was possible.

“The U.S. Army’s Criminal Investigation Command is currently coordinating with Colombian authorities and plans to conduct criminal investigations into credible allegations of sexual assault or criminal acts committed by U.S. soldiers while in that country,” she said.

“We take this issue very seriously and will aggressively pursue all credible allegations,” the spokeswoman concluded.