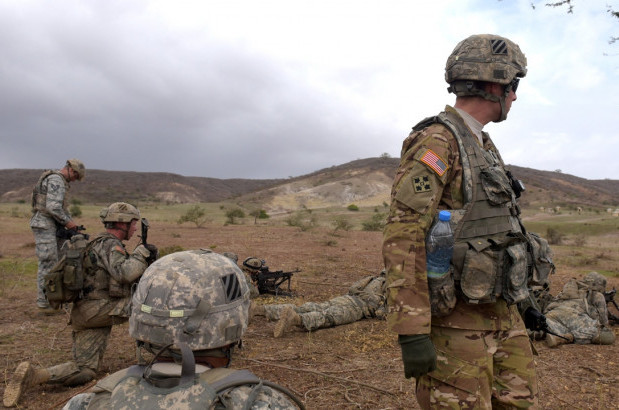 US Special Operations Troop Deployments In Africa Surged In 2016

At the close of 2016, Africa saw a dramatic surge in the number of US Special Operation forces deployed across the continent. Since 2006, the US military has increased its operations in Africa from just 1 percent of overall global Special Operations to more than 17 percent.

The rate at which troops have been surged on to the continent far surpasses that of any other region in the world, including Washington’s substantial military operations in the Middle East. There were 700 Special Operation commandos deployed across Africa in 2014; by 2016, the number had more than doubled, to 1,700.

According to a report in the Intercept, the US has deployed elite military forces in 33 nations across the African continent at any given moment, comprising 60 percent of the continent’s 54 countries. Since 2014, these commandos have carried out hundreds of operations in Africa.

The Special Operations force is made up of the “elite” fighting personnel from all four US military branches, and includes Navy SEALs, Green Berets, and Rangers. These are the same elite forces that were responsible for the operation that led to the assassination of Osama bin Laden in Abbottabad, Pakistan, in 2011.

These troops are party of the US Special Operations Command, or SOCOM, which largely carries out its dirty work in secret. Well aware that its wars are deeply unpopular with the American population, the Obama administration has utilized these groups of elite killers, as well as private contractors, to carry out its brutal operations away from the public eye.

The SOCOM operations in Africa are themselves a component of the Pentagon’s US Africa Command (AFRICOM), the military command post overseeing the entire continent. It is part of a cooperative relationship between SOCOM, the State Department and the respective African nations’ government and military forces.

Headquartered in Stuttgart, Germany, AFRICOM, through a variety of organizations and military cooperatives, carries out training of African military forces, oversees weapons and military equipment sales, and provides military advisors to African governments. In others words, AFRICOM is the spearhead of Washington’s objective of hegemony over the continent.

Africa contains vast economic resources that are coveted by wealthy Western corporate and banking interests. The decline of American capitalism is expressed by Washington’s turn to military force to meet the insatiable lust for profit by the American aristocracy.

The exponential growth of SOCOM in Africa represents a new stage in Washington’s drive for global dominance. While the US government deploys the phony pretext of the “War on Terror,” the justification for every intervention across the globe since the attacks of September 11, 2001, the real target is China, and to a lesser extent Russia, and the two nations’ economic influence on the continent.

In an interview conducted last September with US Special Operations Commander and Brigadier General Donald C. Bolduc in African Defense, a US military trade publication, Bolduc made clear that SOCOM’s objective on the African continent is to ensure the continent’s vast economic and natural resources remain in the hands of Western capitalists.

SOCOM is currently conducting offensives coordinated with national militaries in Libya, Somalia, South Sudan, Uganda, Central African Republic, Mali, and the Democratic Republic of the Congo. In the case of Libya, SOCOM is attempting to secure the installation of Washington’s puppet government set up in the aftermath of the US and NATO-led assault in 2011, which culminated in the assassination of Muammar Qaddafi, killed tens of thousands and left the country in ruins.

In Somalia, SOCOM is largely tasked with providing security to the Western puppet government in Mogadishu, which wields little influence outside the capital, where much of the country is ruled by tribal warlords and the Islamist terrorist militia Al-Shabbab. Somalia’s vast coast along the Gulf of Aden, which forms the waterway for much of the world’s oil traffic, makes it a prime target for Washington.

SOCOM’s cooperative offensive with the US-backed government of South Sudan is aimed at counteracting China’s oil infrastructure investments in the country, which also include Sudan to the north. Washington has targeted Sudan and its president, Omar Bashir, for not cooperating with its agenda for the region and his friendly relations with China.

The carving off of South Sudan in 2011 was done with the backing of the US and Europe with the aim of putting in place a pliant government subservient to Western interests and asserting control over a substantial portion of Sudan’s oil fields. The imperialist power’s drive for control of Sudan’s oil extraction has led to the massacre of thousands.

The crisis of American capitalism is fueling Washington’s drive to utilize its military power to reassert its dominance as the world’s sole economic power. The fact that the United States currently has military operations of one kind or another on every continent in the world underscores the desperation and recklessness with which Washington pursues its aim of global hegemony.

SOCOM’s expanded buildup in Africa, together with the provocative actions against Russia from the outgoing Obama administration, the threat of the incoming Trump administration to target China, and Washington’s extended military operations in the Middle East, threatens the world’s population with an even broader conflagration between nuclear-armed powers.