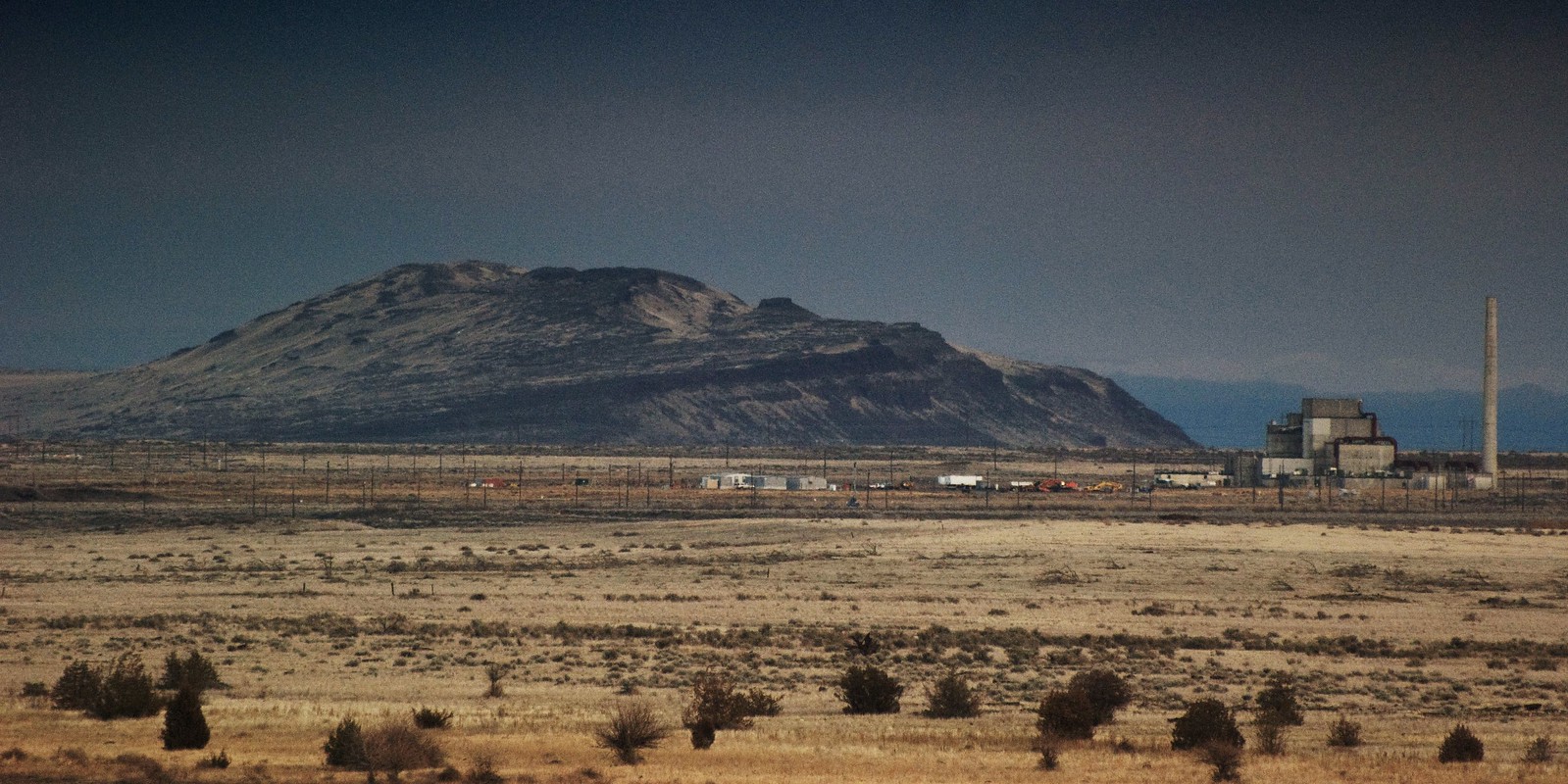 Above Photo: The Hanford Site by the Columbia River in Washington State was built during World War II as part of the Manhattan Project and used to produce plutonium for nuclear weapons. It is currently the most contaminated nuclear site in the country but the DoE doesn’t yet have a long-range plan for handling waste at the decommissioned site. Scott Butner.

The estimated cost of handling the degrading radioactive material is rising steadily — $512 billion at last count.

A year-and-a-half after a scathing Government Accountability Office (GAO) report revealed that the US Department of Energy (DoE) has no coherent plan in place to manage nuclear waste from weapons manufacturing piling up at more than 150 sites across the country, the DoE has made little progress in developing a safe and strategic plan to handle the waste. Meanwhile, the estimated cost of handling the material is rising steadily — $512 billion at last count — and the federal government hasn’t yet figured out how to pay for it.

And, of course, much of the waste will have to somehow remain safely stored for 10,000 years or more, a timeframe even more mind boggling than the size of the debt.

In a letter to Congress in June, GAO said the DoE’s Office of Environmental Management (EM) — which is charged with building facilities to treat millions of gallons of radioactive waste, and remediating contaminated soil and water at nuclear weapons construction sites — needs to use factors such as costs and risks to human health and the environment, in determining which cleanup projects to focus on.

The GAO has reported in the past that the DoE’s cleanup policy, “which governs the EM cleanup program, does not direct how EM should make environmental cleanup decisions, including how to make risk-informed cleanup decisions,” even though GAO and DoE’s own inspector general had been recommending such an approach since the 1990s.

The United States has about 14,000 metric tons of high-level waste and spent nuclear fuel from defense-related activities from the World War II era through the 1980s. This waste is currently stored in facilities in five states and managed by the DoE. EM is responsible for handling most of the contamination at 107 sites. The cleanup cost for these sites is now estimated at $406 billion, up from an estimated $163 billion a decade ago. (Other DoE offices are responsible for $106 billion more in waste handling.)

“The increase in costs is driven by the fact that facilities are continuing to degrade while awaiting disposition, which ultimately drives up stabilization costs and final Deactivation & Decommissioning costs,” DoE reported to Congress last year.

The funding deficit accumulated over decades, during Republican and Democratic administrations. Since the US military created the waste, funding and oversight of its management comes mainly from congressional armed services committees. Unfortunately, the committees are mainly concerned with funding the armed forces of today and tomorrow, not cleaning up yesterday’s garbage.

The defense bill passed by Congress on December 15 does contain some remediation measures for nuclear waste, but it’s not nearly enough. It authorizes $6.48 billion for clean-up. The bill also starts competitive and university grant programs to develop technology to support the clean-ups. It directs DoE to develop a comprehensive strategy within a year to determine the type and quantity of defense nuclear waste it will generate, plans to treat, store, and dispose of it, and to look for potential disposal facilities. Within two years, DoE would have to develop a computer system for the process. GAO will evaluate the effort.

In the first half of 2021, EM spent about $7.5 billion on nuclear waste cleanup and management activities at 91 sites. At a very friendly hearing in May before the Senate Armed Services Subcommittee on Strategic Forces, William “Ike” White, acting assistant secretary for EM, said the office was “entering a new era of cleanup progress” and “ramp-up in the ability to tackle radioactive waste stored in underground tanks.”

But GAO says EM’s cost and schedule estimates for cleanups are “unreliable” and said that at a number of sites the agency’s “liability may continue to grow, in part because EM may have underestimated the cost to complete some of its largest projects.” (GAO also reported in October that it “could not determine how much DoE actually spends on cleanup research and development because the agency does not track such spending … nor evaluate the outcomes of the research.”)

The GAO found, for instance, that EM has not developed a long-range plan to handle nuclear waste at the Hanford Site in Washington State, currently the most contaminated nuclear site in the country. The decommissioned site near the Columbia River in Benton County has 56 million gallons of radioactive waste in 177 underground tanks. Cleanup and waste storage at the site, which manufactured plutonium for 40 years, has been bungled for decades. Over the years, at least 1 million gallons of radioactive liquids have leaked into the ground from some of these tanks and contaminated the local aquifer and the Columbia River. DoE replaced some of the leaking tanks but it still hasn’t decided what to do with the now-empty tanks, though the department’s own analysis showed it could save about $18 billion by sealing them in place rather than moving them.

EM could save hundreds of billions of dollars with adequate planning, GAO says. “GAO looks at what we do with what we have, not what we can do if we had more resources,” says Nathan Anderson, GAO director of natural resources and environment. “We offer a menu of options on how to better use resources…that’ll last to the end of the century and maybe more.”

For example, EM could save billions of dollars if Hanford, which considers all its waste “high level,” reclassified some of the material as “low level” if it’s not very radioactive, the GAO report suggests. In these cases, DoE could simply seal the tanks with grout; a mixture of water, cement and sand. (It’s not clear if doing so is legal, though trials found it works. EM stopped construction of a waste pretreatment plant at Hanford in 2012 due to technical challenges. The plant would have sorted out high- and low-hazardous waste.) GAO has suggested that Congress consider clarifying the law but Congress has yet to act.

“There are still 177 underground tanks at Hanford that have to be treated,” Anderson says. “Congress needs to give DoE the flexibility to decide based on science, not source.”

Similarly, GAO found that EM hasn’t budgeted space at its Waste Isolation Pilot Plant (WIPP) in Carlsbad, New Mexico and can’t even tell if the plant can continue to operate on schedule. The Carlsbad plant is the only deep geological space in the nation that is licensed to store contaminated clothing, tools, etc. and the most radioactive waste, such as plutonium, for 10,000 years.

The plant was designed to stop taking material in 2024 but DoE plans to expand it and continue filling it until 2050, and maybe even longer. However, GAO says that expansion “work may not be completed before existing space is full.” Construction of more storage at the facility has been hampered by a contractor that lacked adequate technical expertise, and staffing shortages. Accidents in 2014, including an underground fire that contaminated a tunnel with radiation, reduced the plant’s operations.

DoE is now running up against a statutory limit for how much waste it can store in the space, so it recently changed its counting method to exclude space between storage drums as storage space. New Mexico regulators approved the change but the matter is being challenged in court.

“They knocked a third out of it with a slight of hand. That will allow them a lot more waste,” complains Scott Kovac, operations & research director of Nuclear Watch New Mexico (NWNM), a local anti-nuclear group.

The New Mexico Environment Department is now considering DoE’s request to add two new storage panels to the existing storage space. “If the two new panels were added to the permit, the modification request shows that the total WIPP capacity would be more than 6.7 cubic feet of waste, even though the legal limit is 6.2 million cubic feet,” Kovac says.

NWNM, the Stop Forever WIPP Coalition, and other environmental and activist groups are awaiting several court and state government decisions on the future of the site. Kovac says DoE needs to find a new repository but doesn’t know of a good site. “We are trying to keep New Mexico from being the dump site of the US.”

But building new storage facilities, whether for waste from nuclear weapons manufacturing or power generation, is a fraught issue.

Back in the 1980s, DoE and Congress had approved construction of another permanent, deep underground waste burial site in Yucca Mountain in southern Nevada to store commercial spent nuclear fuel — used fuel from nuclear power reactors. But following decades of fierce opposition to the project from the state and Nevada’s indigenous tribes, Congress eliminated funding for it in 2011. As per the Nuclear Waste Policy Act of 1982, the management and permanent disposal of commercial spent nuclear fuel too, is federal responsibility, but the DoE is nearly a quarter-century behind in accepting waste from commercial reactors.

Earlier this year, as an interim measure, the Nuclear Regulatory Commission granted licenses to two companies — Holtec International and Interim Storage Partners — to construct spent fuel storage facilities in New Mexico and Texas respectively to temporarily store waste from nuclear power plants across the US. Both projects are being challenged in court by the states and environmental groups that, among other things, are concerned that these temporary facilities, whose license lasts 40 years, might eventually become permanent, given the lack of an additional permanent waste storage facility like the one proposed at Yucca Mountain.

A separate GAO report, published in September, has urged Congress to “take action to break the impasse over a permanent solution for commercial spent nuclear fuel.” According to that report, as of 2019, about 86,000 metric tons of commercial spent nuclear fuel was being stored onsite at 75 operating or shut-down nuclear power plants in 33 states, and the amount of spent fuel was growing by about 2,000 metric tons annually.

GAO is now narrowing the focus of its investigations from department management to specific troubled projects, Anderson says, such as certain facilities run by the National Nuclear Security Administration (NNSA), the DoE agency responsible for the military application of nuclear science, which may be more likely to leak than some other sites EM was spending its limited resources on.

Last year, GAO faulted EM for not developing a strategy to dispose of certain waste from Idaho National Laboratory, the nation’s site for nuclear energy research and development. DoE’s own report from 2020 states it could save between $12 billion and $15 billion by sealing off some of the low-level waste at the Idaho National Laboratory, saving transportation and deep storage costs.

A Senate Armed Services Committee report noted this year “that as the United States continues to maintain and modernize its nuclear weapons stockpile, waste will continue to be generated and must be treated, stored, and disposed of. … It is not clear whether there are sufficient facilities to address the waste generated by these activities or whether such facilities are included in current plans and budgets.”

In an emailed statement to the Journal, EM said it is “committed to continuous improvements in contract and project management and in reducing DoE’s environmental liabilities.” It added that GAO “acknowledged the notable actions EM has taken to demonstrate commitment to improving its contract and project management” in cleaning up some problem sites, such as the East Tennessee Technology Park at Oak Ridge and the Salt Waste Processing Facility at Savannah River, South Carolina.