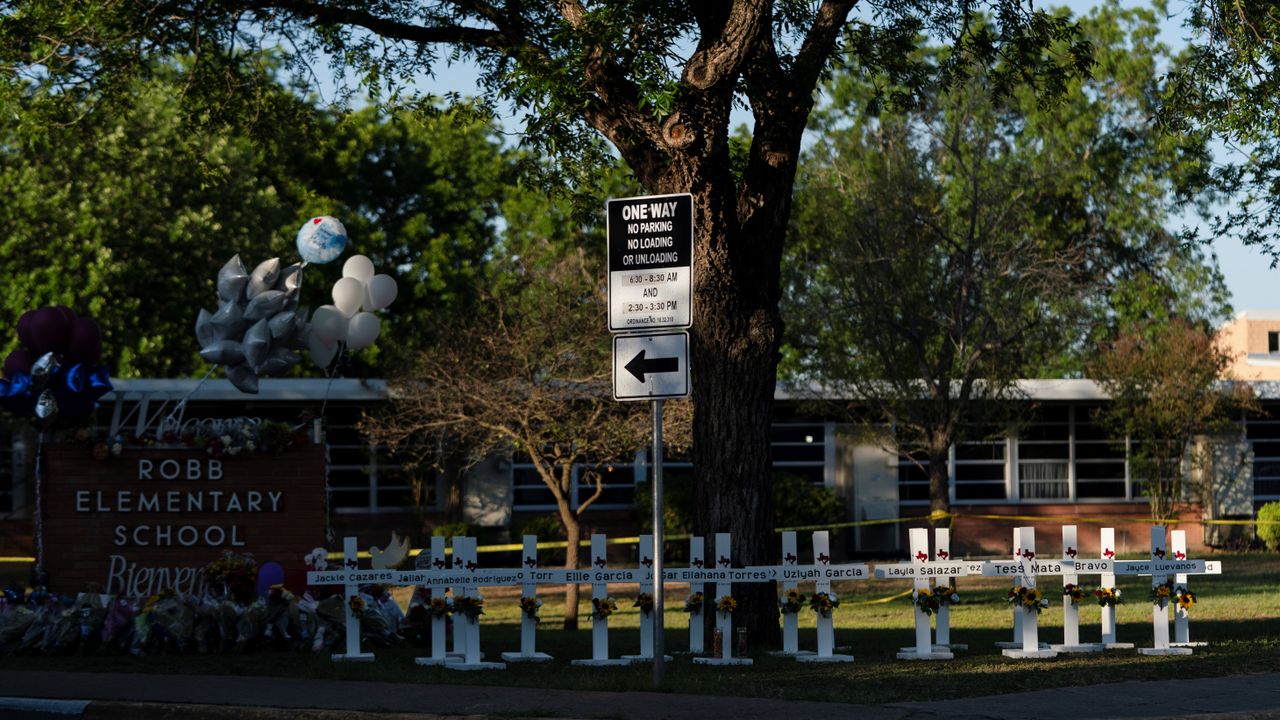 US Students Walk Out To Protest Gun Violence

“It’s Not The Shooter, Mental Health Or The Gun That Is The Problem. The Problem Is Society Itself.”

In response to Tuesday’s massacre at Robb Elementary School in Uvalde, Texas, which left at least 17 people injured, 19 elementary students and two teachers dead, students and teachers across the United States walked out of school Thursday to protest gun violence.

Several walkouts occurred at schools where memories are still fresh from their own tragic experience with mass homicidal violence, a routine phenomenon in capitalist America. At Oxford High School, located on the outskirts of the Detroit, Michigan metro region, where a school shooting last December left four students dead, hundreds of students walked out of school and amassed on the football field, where they formed a “U” in support of Uvalde.

Similar scenes were repeated at Whitefish Bay High School in Wisconsin with video showing hundreds of students streaming out of the building. Gracie Lutz, a freshman at Whitefish, told WISN-12 she remembered walking out of school as a fifth grader following the 2018 massacre at Parkland, Florida.

From Oak Park River Forest High School outside of Chicago, to the Francis Howell North High School in St. Charles, Missouri, to Green Level High School in Cary, North Carolina, an estimated 200 schools and thousands of students participated in the walkouts. At many events, students read aloud the names of the deceased and denounced government officials for their decades of inaction in the face of the unending slaughter of students.

While students’ anger at gun violence is genuine, the walkouts themselves were organized by the Democratic Party-affiliated Everytown for Gun Safety. The group was originally founded in 2006 as Mayors Against Illegal Guns by New York City’s then Mayor and billionaire Michael Bloomberg along with 13 other mayors. The group is seeking to channel mass social anger at gun violence behind Democratic Party electoral campaigns.

Landon, a high school student in Pennsylvania, spoke to the World Socialist Web Site regarding the massacre in Uvalde.

“I think the shooting was an absolute tragedy for everyone involved. The big problem is the aftermath. It’s always the issue of guns or mental health but never the society which was responsible for shaping and molding the person who committed the atrocity. Under no circumstance is this something that is isolated. So long as the present existing society continues in its current form, the more these incidents we will see,” said Landon.

He concluded, “It’s not the shooter, mental health or the gun that is the problem. The problem is society itself.”

A retired special education teacher from Maryland told the WSWS that “the Democrats espouse ‘stopping the gun violence,’ but they don’t do anything, as we know. The gun manufacturers supply the weapons for these endless wars that the workers have to fight.”

The retired teacher continued, explaining, “Gun sales in the United States continue to rise, and these murderous companies continue to rake their profits of death.

“The answer to this is global socialism and gun manufacturers making things to help [society] instead of killing.”

As students were walking out across the country, in Uvalde, Texas, police continued to give conflicting and contradictory information as to what exactly transpired early Tuesday afternoon.

However, as more parents speak out and social media videos emerge, it is clear that the police have been lying since the beginning of the attack in an attempt to cover up their own inaction for over an hour as 18-year-old Salvador Ramos massacred children and teachers.

Their response to the mass killing of innocent children provides a stark example of the class role the police play in capitalist society.

Police are not “neutral guardians” deployed to “protect and serve” the population. They are the foot soldiers of capital, armed with military grade guns and armor in order to harass, intimidate and suppress workers and enforce bourgeois class rule—nothing else.

Police have yet to explain why their officers did not attempt to breach the building after Ramos crashed his grandmother’s truck, shot at bystanders, climbed a “security fence,” shot at the school and then entered the building, before he was able to allegedly “barricade” himself inside a classroom, filled with defenseless children and teachers.

While police initially claimed that they valiantly “took fire” from Ramos and desperately tried to prevent the shooter from entering the building, as this viral video shows, police and what appears to be US Marshals, were much more concerned with assaulting desperate and despondent parents while Ramos was still alive and inside the school.

Despite the presence of multiple police, heavily armed with assault riles and body armor, none of the cops are shown to be rushing towards the building to save the children. Instead, at least one cop has his taser out ready to shock parents.

In another video, which the Washington Post claims began at approximately 11:54 a.m., a parent is heard voicing his displeasure at the cops’ less than enthusiastic response to the clear danger.

“Look, they are all just f**ing parked outside. They need to get in there!” he said, adding, “The cops ain’t doing sht but standing outside.”

Another parent desperately pleads with the police, “Get in there! What is the f***ing deal? There are kids in there!”

Later on in the same video, a cop is seen pushing a parent telling her to “get across the street,” to which another parent responds, “You don’t have to get violent with us. Why don’t you go get violent [gesturing towards the school] with that mother f***er?”

“You know they are little kids, right? You know they don’t know how to defend themselves?” another parent tells the cop, who is more concerned with policing the unarmed parents than neutralizing the mass murderer.

In an interview with the Associated Press (AP), Juan Carranza, 24, said he saw a woman yelling at the police, “Go in there! Go in there!” after Ramos ran into the school. Carranza, who lives across the street from the school, said police did not follow the shooter into the building.

Javier Cazares, whose daughter Jacklyn Cazares, was killed in the attack, said he arrived at the school as police were still meandering outside the school. While police milled about, Cazares raised the prospect with other parents of charging into the building to save their children trapped inside.

“Let’s just rush in because the cops aren’t doing anything like they are supposed to,” he recounted to the AP. Speaking on the cops’ efforts, Carranza said, “More could have been done. They were unprepared.”

Carranza said he saw Ramos crash his vehicle and shoot at bystanders before making his way into the school. Reflecting on the numerical advantage the police had at the time Ramos entered the building, Carranza said, “There were more of them. There was just one of him.”

While police claimed in the first 48 hours following the attack that they “engaged” Ramos outside the school after he crashed his grandmother’s truck, which he had stolen after shooting her in the face on Thursday, Victor Escalon Jr. a regional director at the Texas Department of Public Safety, reported that this was, in fact, not the case and that Ramos entered the school “unobstructed” by cops. Despite his violent actions, Ramos apparently entered the school through an unlocked door at 11:40 a.m., 12 minutes after crashing the truck.

Escalon did not explain why there were no cops on the scene, and he could not account for the previous discrepancy.

Furthermore, Escalon offered no explanation as to why police were not on the scene earlier, given the fact that Emergency Services had received a call at around 11:30 a.m. reporting the fact that Ramos’s grandmother had been shot. Escalon claimed that after crashing the truck, Ramos exited the vehicle and shot at multiple witnesses who initially attempted to offer aid, prompting more calls to Emergency Services.

Despite receiving by this point multiple calls from citizens about several shots being fired, including outside an elementary school, Escalon claimed it was not until 11:44 a.m., roughly 15 minutes after Ramos crashed and began shooting outside the school, that Uvalde police and an “independent school resources officer” allegedly tried to go into the school.

Escalon claimed that upon “receiving fire,” the cops ran away and waited over an hour for a heavily armed tactical squad from Customs and Border Patrol to arrive. In the meantime, Ramos continued to execute defenseless children while police outside the school arrested distraught mothers.

In an interview with the Wall Street Journal, Angeli Rose Gomez said, “The police were doing nothing” as Ramos was inside. “They were just standing outside the fence. They weren’t going in there or running anywhere.”

Upset that police were doing nothing to secure her children, a second and third grader, Gomez said she told the cops first politely and then “with more urgency” to go into the school. After a few minutes, Federal Marshals grew tired of hearing the pleas of the desperate mother and placed her under arrest for “intervening in an active investigation.”

Gomez eventually convinced a local Uvalde cop to uncuff her, after which, she hopped the fence and rescued her own children herself.

When police finally did decide, an hour after the massacre started, to attempt to make an entry into the school, it appears they clumsily ensured another child would die before the day was done.

In an interview with KENS-5, a boy who was in the classroom with Ramos recounted his harrowing experience.

“When I heard the shooting through the door, I told my friend to hide under something so he won’t find us,” he said. “I was hiding hard. And I was telling my friend to not talk because he is going to hear us.”

The young boy and four other students hid under a table that had a tablecloth over it, possibly preventing Ramos from spotting the children. However, Ramos had the assistance of the police in finding his next victim.

The boy recalled, “When the cops came, the cop said: ‘Yell if you need help!’ And one of the persons in my class said, ‘Help!’ The guy overheard, and he came in and shot her.”