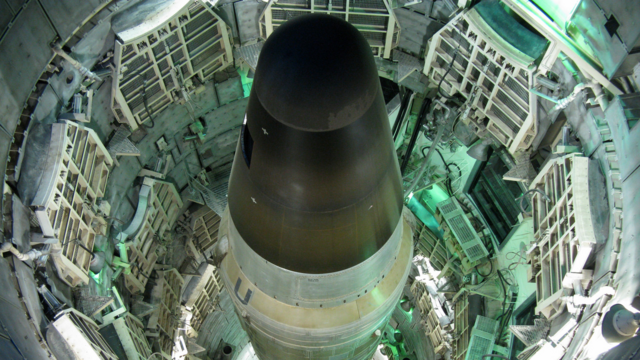 US To Ring China With Missiles In Nuclear Arms Race

Above Photo: A Titan II nuclear missile [credit: US Department of Defense]

Within hours of the official withdrawal by the United States on Friday from the world’s most important nuclear treaty, the Pentagon made clear that it intends to ring China with missiles amid a rapidly accelerating nuclear arms race.

Speaking to reporters during a trip to Australia, US Defense Secretary Mark Esper said the Pentagon would deploy missiles prohibited under the treaty “sooner rather than later.”

“I would prefer months,” Esper said.

The deployment of medium-range missiles in the Pacific would turn the Chinese coast and the Pacific islands surrounding it into a nuclear battlefront, putting the lives of billions of people in China, the Koreas, Japan, Taiwan and the broader region at risk.

The INF treaty, which was signed between then President Ronald Reagan and his Soviet counterpart Mikhail Gorbachev in 1987, banned the US and Russia from developing missiles with ranges between 500 and 5,000 kilometers, meaning that most of Europe and much of the Pacific were off limits to the stationing of nuclear missiles.

However, as technological trends shifted military balances and the United States escalated its conflict with China, Washington increasingly came to view the Cold War-era treaty as conflicting with its aims of militarily encircling Beijing, which was not a signatory.

With the potential deployment of US nuclear missiles just minutes in flight-time from the Chinese mainland, tensions will be on a hair trigger, with the huge population of the region living under the specter of nuclear annihilation.

Responding to the US withdrawal from the INF treaty, UN Secretary-General António Guterres warned that “the world will lose an invaluable brake on nuclear war.”

Daryl Kimball, executive director of the Arms Control Association, said that Trump is “pursuing a strategy that will create the conditions for a dangerous arms race.” The Financial Times warned, along the same lines, of Trump’s “rekindling of the nuclear arms race.”

In defending his decision to station missiles in a densely populated area thousands of miles away from America, Esper accused China of “weaponizing the global commons using predatory economics.”

In other words, China, by carrying out peaceful economic activities, is threatening the United States, and that should therefore be countered with the threat of military annihilation.

“We firmly believe no one nation can or should dominate the Indo-Pacific,” said Esper, a man who represents a country that once “scorched and boiled and baked to death” (in the words of Air Force General Curtis Lemay) hundreds of thousands of Japanese civilians in its war to conquer the Pacific.

In subsequent comments, Secretary of State Mike Pompeo, who is accompanying Esper on his trip to Australia, declared that the United States had been “asleep at the switch” with regard to the “danger” posed by China.

He then reemphasized Esper’s declaration that China’s peaceful economic growth constituted a military threat to the United States.

“I’ll hear folks talk about trade and economic issues as separate from national security,” Pompeo said. “Let’s make no mistake about it, China’s capacity, the People’s Liberation Army’s capacity to do exactly what they’re doing is a direct result of trade relationships that they built.”

“They grew their country on the backs of a set of unfair trade rules. So they were able to grow their economy at a high rate of speed,” Pompeo said.

“Those very same economic tools that President Trump is so focused on fixing are what also has enabled China to do all of the things they’re doing with their military,” he added.

In other words, there is no dividing line between peaceful coexistence, and military conflict. Economic growth and trade are themselves seen by Washington as military threats to be countered by anything from trade conflict to military saber-rattling and full-scale war.

Pompeo’s words are in keeping with the doctrine of great-power rivalry against Russia and China embraced by the Pentagon last year, which declared that “Great power competition—not terrorism—is now the primary focus of US national security.”

The waging of such conflicts will require a “whole-of-society” approach, the Pentagon declared in referring to what is more conventionally called total war.

In addition to the ending of the INF treaty Friday, the US last week fired three broadsides in its conflict with China.

If none of these actions are seriously discussed or debated in the media, it is because there exists agreement between the Democrats and Trump on need to prepare for war with China. As former Trump campaign chairman Steve Bannon put it, “The person who wins the election, be it a Democrat or not, will be as big or a bigger hawk than Donald Trump… The Democrats are just as hard on this as the Republicans.”

In some ways, the Democrats are even more sweeping in their language. To cite just one example, in June, Democratic presidential candidate Pete Buttigieg declared that a conflict with China provided the basis for “national unity.”

“The new China challenge provides us with an opportunity to come together across the political divide,” he said. “At least half the battle is at home.”