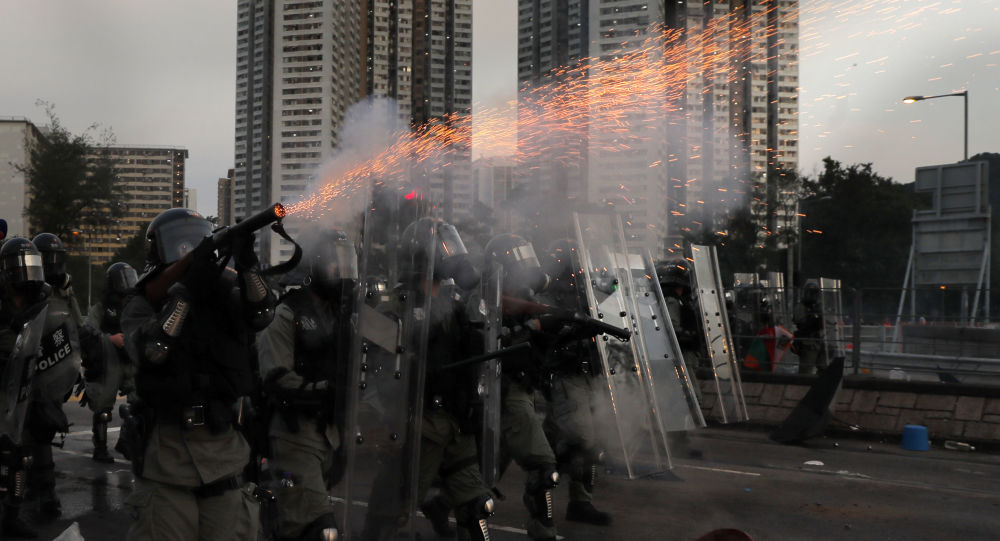 Imagine the response if protesters were to smash up JFK or Heathrow airports, closing down international flight services. The US and British authorities would have culprits rounded up and jailed, or worse, shot dead on the spot by armed police.

The scenes of vandalism and lawless insurrection this week at Hong Kong’s airport – the world’s eighth-busiest hub for passengers – were staggering. Thousands of club-wielding demonstrators trashed the terminals causing cancellation of all flights for the day.

A reporter for China’s Global Times news outlet was lynched by an angry mob on suspicion of being an undercover policeman. That suspicion does not excuse beating the man nearly to death, nor the subsequent attacks on paramedics as they entered the airport to retrieve the injured journalist.

What’s also staggering is the hypocrisy of the American and British governments and their media.

Senior US and British politicians are condemning China and the Hong Kong police for heavy-handed tactics towards the “pro-democracy protesters”. American diplomats have been photographed holding discussions with organizers of the demonstrations, which have rocked the southern Chinese enclave for the past 10 weeks.

The United Nations has also weighed in to censure China for repression and excessive use of police force. Why hasn’t the UN condemned French authorities for their much more lethal use of force against Yellow Vest protesters, dozens of whom have lost eyes from French police firing projectiles at close range?

Upping the ante of interfering in China’s sovereign affairs, a senior British lawmaker has urged Britain to grant citizenship to Hong Kong residents. Conservative MP Tom Tugendhadt said this would give “reassurance to protesters” that Britain supports their cause.

Hong Kong was a British colony until it was handed back to China in 1997. Beijing has sovereign control of the enclave albeit with a degree of local autonomy until the full handover to China’s integration in 2047 as per the negotiated transfer with Britain. Nevertheless, Beijing has authority to ensure law and order in the territory.

For Washington and London to remonstrate with China over how it handles the civil unrest is totally unwarranted.

But the disturbances have continued to grow and become more violent. Last month, Hong Kong’s legislative building was trashed by marauding gangs who defaced the Chinese national flag and erected the British Union Jack. Other street demonstrations have unfurled British and American flags.

There is thus sound evidence for the Hong Kong and Beijing authorities to claim that the “pro-democracy protesters” are being orchestrated as part of a “color revolution” playbook used by the US and Western allies for regime-change subversion.

It seems significant that the Hong Kong mayhem comes at a time when the Trump administration is waging a trade war with China and trying to coerce Chinese President Xi Jinping into making onerous concessions for American economic advantage.

In any case, whatever the possible motives for interference in China’s affairs, what is undeniable is the sheer hypocrisy and disingenuousness of American and British “concern”.

A few years back when US citizens launched an “Occupy Wall Street” protest against American oligarchic oppression and exploitation, the peaceful demonstrators were ruthlessly clubbed off the streets and public parks. Heads were split open by batons and hundreds of law-abiding citizens were thrown into the back of armored vehicles.

British politicians and media tut-tut at China’s possible deployment of anti-terror laws to quell the violent chaos in Hong Kong. During 150 years of British colonial rule, Hong Kong never even had elections nor local government. It was ruled directly from London. Britain’s use of anti-terror laws was notoriously deployed in Northern Ireland during recent conflict (1969-1997) when tens of thousands of citizens were incarcerated without any due process or fair trial. British police and soldiers operated a shoot-to-kill policy resulting in hundreds of innocent civilians being murdered.

Hong Kong’s political dispute is for the people of the territory to resolve by dialogue and peaceful means. China’s central government has the authority to ensure public order and respect for institutions. The US and Britain should apply their moralizing interventions to their own citizens – if they had any integrity about their pretensions.