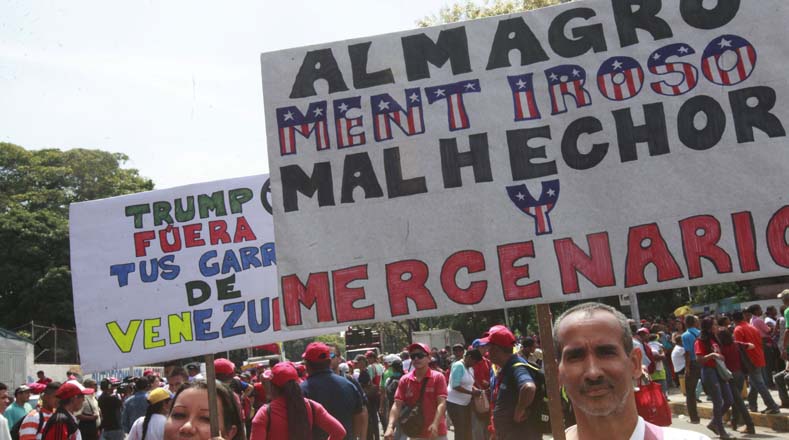 Above photo: From Venezuelanalysis. March 2017 – Venezuelans took to the streets to show their disapproval of OAS head Luis Almagro and denounce US President Donald Trump for his continued sanctions against their country. (AVN)

NOTE: On the anniversary of the disastrous US-led coup in Chile that killed President Salvador Allende and unleashed a brutal era of neoliberalism, the US State Department secretary Mike Pompeo released this press statement. It is so filled with misinformation, it is hard to know where to start. The US puppet Juan Guaido has no power in Venezuela. His coup attempts have failed numerous times, so the US is pretending he succeeded and moving forward as if he were the president, which violates the UN charter. That OAS countries are supporting this charade is deeply distressing because they have laid the groundwork for their own demise should the US turn its claws on them. Indeed, several of the countries voting with the US have experienced great tragedy as victims of US imperialism. Venezuela saw this type of action coming and initiated steps to leave the OAS, which were finalized in April of this year.

Popular Resistance reaffirms its recognition of Nicolás Maduro as the elected president of Venezuela and support for the Bolivarian process. We reject the US’ ongoing efforts at regime change. If the US actually cared about Venezuelans, it would respect their sovereignty, end the blockade, stop the unilateral coercive economic measures and cease military aggression.

Join us in New York City next week as we rally and march to the United Nations to demand the United States be held accountable for its frequent violations of international law. Visit www.PeoplesMobe.org.

The government of Venezuela has denounced the US invocation of a Cold War-era mutual defense treaty on behalf of the opposition in Caracas, a move which clears the way for military intervention in the Latin American country.

Washington has invoked the Inter-American Treaty of Reciprocal Assistance (TIAR) with 10 other Latin American countries and Venezuela’s self-proclaimed “interim president” Juan Guaido, declaring in a statement on Wednesday that President Nicolas Maduro “not only poses a threat to the Venezuelan people, his actions threaten the peace and security of Venezuela’s neighbors.

Blaming the “increasingly destabilizing influence that the former regime of Nicolas Maduro is having on the region,” US Secretary of State Mike Pompeo pointed to “recent bellicose moves by the Venezuelan military to deploy along the border with Colombia as well as the presence of illegal armed groups and terrorist organizations.”

The treaty nations would have no choice but to consider an array of “multilateral economic and political options,” he warned, signaling that while the hawkish National Security Advisor John Bolton may have resigned on Tuesday, his spirit still steers the foreign policy in Washington.

Caracas slammed the move, calling it the “shameful heritage of neocolonialism in Latin America” and pointing out that the TIAR had been drafted “to legitimize military interventions in Latin America for ideological reasons” during the Cold War – only to be ignored when the UK launched a war against Argentina over the Falkland Islands.

Minister of Foreign Affairs Jorge Arreaza denounced the “infamous imperial instrument” and “firmly reject[ed] the claims of this small group of countries that threaten the peace of integrity of Venezuela and the entire continent.”

The TIAR is a mutual military defense agreement that clears the way for foreign intervention, a threat the Trump administration has refused to rule out over the past eight months of slow-motion coup since Guaido declared himself president in January with Washington’s blessing.

While several US allies rushed to recognize his leadership and denounce President Maduro as a “usurper,” Guaido has repeatedly failed to actually seize power, leaving his backers looking increasingly ridiculous – and desperate.

While US ambassador to the Organization of American States Carlos Trujillo insisted that the TIAR was activated “not to invoke military force,” but to “seek a legal framework” for it, Guaido’s self-proclaimed government has been operating outside the legal realm since the beginning. From overstaying the legal term of an “interim president” – which Venezuela’s constitution limits to 30 days before requiring elections – to embezzling hundreds of thousands of humanitarian aid dollars, he is currently being investigated by Venezuelan authorities for high treason over allegedly trying to negotiate away the country’s claim to the territory of Esequibo.

Maduro deployed the Venezuelan military and missile defense systems to the Colombian border this week and declared an “orange alert,” warning that Colombian President Ivan Duque was plotting to stage a false-flag attack and hoodwink the international community into supporting him in attacking Venezuela.

The States Parties to the Inter-American Treaty of Reciprocal Assistance (TIAR) in the Permanent Council of the Organization of American States (OAS) today approved a resolution to establish the Organ of Consultation of the Treaty and convene, during the second half of September, the Meeting of Ministers of Foreign Affairs referred to in Article 11 of the TIAR.

Additionally, the document resolves “to inform the Security Council of the United Nations of the text of this resolution and of all activities related to this matter.”