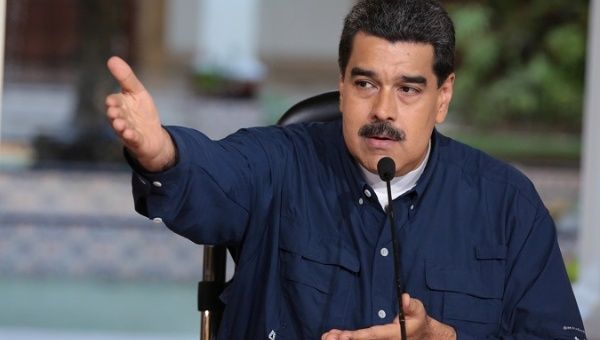 Above photo: President Maduro responds to Trump’s sanctions on Venezuela and its oil company, August 25 | Reuters

Venezuela – President Nicolas Maduro says the new financial sanctions imposed by the U.S. president on Venezuela are illegal, and the first to suffer will be U.S. investors.

He said the prohibiton on U.S. citizens and companies buying Venezuelan bonds and securities, is an attempt to strangle Venezuela’s economy. “Can the world accept this?” he asked, and called for solidarity from the world community.

He recognized that the sanctions will mean sacrifice for the Venezuelan people. But he said they also open up the opportunity for a new era of independence. On this day in 2017, he said, “begins the stage of post-domination by the United States, with Venezuela again at the center of this struggle for dignity and liberation.”

Speaking on national television, Maduro recalled that over the last two years his government has paid on time every cent of the US$65 billion that it owed on debt payments. “We could have spent that on education, more homes, water supplies and public works.”

He said the measures amount to a blockade on Venezuela, similar to that imposed on Cuba, but that they will fail just as that one did.

Maduro pointed out that 62 percent of Venezuelan government bonds are held by U.S. investors. Another 12 percent are held in the UK and 6 percent in Canada. Trump,he said, has burnt their investments. “What will they do with them now?”

The Venezuelan president announced that he would be inviting all U.S. investors and the U.S. companies that receive oil from Venezuela, to a meeting in Caracas to discuss the best response to “this destructive move by Trump.”

The new sanctions are the first by the U.S. to target the Venezuelan economy itself rather than individuals. President Trump reportedly signed the executive order containing the measures on Thursday night, but they were announced early on Friday. 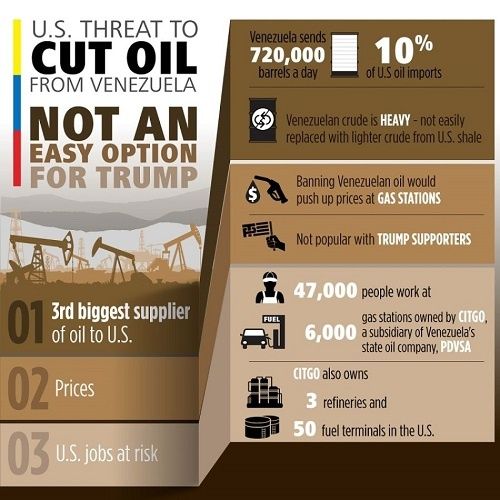 Speaking after meeting the secretary general of the United Nations in New York, Venezuela’s foreign minister, Jorge Arreaza, described the sanctions as “one of the worst aggressions against Venezuela in recent years.”

“These types of sanctions show that the U.S. wants to rule over the continent. We will never accept this,” Arreaza said.

“We are studying all measures that we can take in response to these sanctions.”

“Cuba strongly condemns the Executive Order signed today by the President of the United States, Donald Trump, imposing new and stronger economic and financial sanctions against the Bolivarian Republic of Venezuela,” the Cuban foreign ministry said in a statement.

“We reject the injust, unilateral, arbitrary, illegal actions and violations of international rights that continue to be applied against the constitutional government headed by President Nicolas Maduro and that now is worsened by these new measures,” the statement continued.

Announcing the sanctions, the White House press secretary, Sarah Huckabee Sanders, said, “In an effort to preserve itself, the Maduro dictatorship rewards and enriches corrupt officials in the government’s security apparatus by burdening future generations of Venezuelans with massively expensive debts.”

“These measures are carefully calibrated to deny the Maduro dictatorship a critical source of financing to maintain its illegitimate rule, protect the United States financial system from complicity in Venezuela’s corruption and in the impoverishment of the Venezuelan people, and allow for humanitarian assistance.”

The new round of sanctions include a 30-day transitional period, allowing certain debt trades to continue. They also include exemptions for transactions involving Citgo, the PDVSA’s U.S. affiliate.

“We don’t agree with anything (President Nicolas) Maduro is doing,” U.S. Ambassador to the United Nations Nikki Haley said in a press conference shortly after the White House announcement.

“We wanted to rely on the OAS (Organization of American States), but they weren’t able to do anything. We tried an emergency meeting with the Security Council, but they didn’t think it had anything to do with peace and security. Now we’ve placed sanctions and we’ll see if there’s anything else we can do through the UN.”

“The U.S. won’t allow an illegitimate dictatorship to take hold in the hemisphere,” McMaster said Friday.

“The Maduro dictatorship will not be able to accumulate debt that benefits corrupt insiders.”

McMaster added that although no military options are being explored in the “near future,” Washington is considering a “wide range of options” against Venezuela.

The decision comes days after U.S. Vice President Mike Pence promised to ramp up pressure on Venezuela in the wake of its July 30 National Constituent Assembly, ANC, election.

Pence met with several opposition leaders in Miami, capping off his tour of Latin America last week where he sought support against Maduro’s govenrment. The meeting with 15 emigre political figures took place at a Catholic Church in Doral, well known as an enclave for Venezuelans opposed to the administrations of late President Hugo Chavez and Maduro.

“We have many options for Venezuela and by the way, I’m not going to rule out a military option,” Trump told reporters earlier this month in apparently impromptu remarks.

“A military operation and military option is certainly something that we could pursue.”

Last month, the United States imposed sanctions on 13 Venezuelan officials ahead of the ANC.

“As President Trump has made clear, the United States will not ignore the Maduro regime’s ongoing efforts to undermine democracy, freedom, and the rule of law,” Treasury Secretary Steven T. Mnuchin said in a press release.