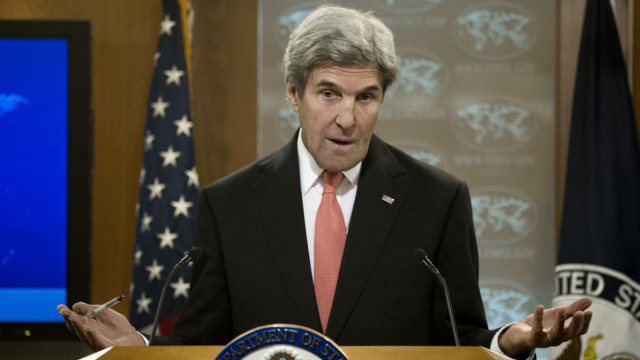 US Was Aware Of ISIS And Sought Regime Change In Syria

Above photo: Secretary of State John Kerry speaks during a news conference at the State Department in Washington, Thursday, Jan. 5, 2017. (AP Photo/Cliff Owen)

‘We saw that Daesh was growing in strength and we thought Assad wasn’t,’ Kerry said, admitting that he unsuccessfully argued for the use of force in Syria.

MINNEAPOLIS — WikiLeaks brought renewed attention to an audio recording in which Secretary of State John Kerry admits not only that he supported war in Syria for the purpose of overthrowing the government, but that the United States knew about the strength of terrorist groups in the region and allowed them to grow yet more powerful.

Originally leaked to The New York Times in late September and published in its entirety by CNN shortly after, the recording is of a meeting the secretary of state had with Syrian civilians at the Dutch Mission to the United Nations in September. CNN has since removed the audio, but left a description of its contents along with an editor’s note claiming the file had been removed “at the request of some of the participants out of concern for their safety.”

However, it’s rare that any content is truly scrubbed from the internet. Clips of Kerry’s discussion can still be found on the Times website, and the complete audio file was published on Oct. 4 by YouTube user Angel North.

WikiLeaks published a link to the recording posted on YouTube on the organization’s Facebook page on Tuesday, and that post had been reshared nearly 2,900 times by Thursday afternoon.

The Times and CNN reported that Kerry was speaking to a group of Syrian civilians at the Dutch Mission during U.N. negotiations over a proposed ceasefire. Taking an apologetic tone, Kerry admits that he argued for military intervention in Syria as far back as 2013, when rumors swirled that the government of Syrian President Bashar Assad had used chemical weapons against civilians.

The chemical weapons attack, which was alleged to have taken place in Ghouta, a suburb of the Syrian capital of Damascus, could never be proven. MintPress News reported in August of 2013 that there was strong evidence suggesting the attack had actually been carried out by so-called “moderate rebel” fighters who have the backing of the U.S. government.

Despite the questionable nature of the evidence, Kerry says in the leaked recording that he used the alleged attack to urge the United States to directly attack Assad, only to be rebuffed by Congress and President Barack Obama. Kerry continued:

Under the Obama administration, the United States has repeatedly offered training and materiel to rebel groups that are so closely linked to terrorist groups as to be virtually indistinguishable from al-Qaida and Daesh (an Arabic acronym for the terrorist group commonly known as ISIS or ISIL in the West).

However, Obama resisted calls by Kerry, former Secretary of State Hillary Clinton, and Pentagon insiders to more openly declare war on the nation, including through the imposition of a no-fly zone.

In the 40-minute discussion at the Dutch Mission, Kerry even admits that the United States was well aware of the relative strength of Daesh in the region. “We saw that Daesh was growing in strength and we thought Assad wasn’t.”

The 2013 chemical weapons attack is one of many alleged war crimes used by the White House and the mainstream media to support calls for “humanitarian” military intervention in the region. The media often relies on questionable human rights “experts” and even faked or recycled photos to justify the ongoing push for war in Syria.

However, with Russia leading the current peace process and President-elect Donald Trump promising to end U.S. involvement in the Syrian civil war, the opportunity for the United States to replace Assad with a leader more friendly to the West may have passed.

Listen to the leaked audio of John Kerry’s meeting with Syrian rebels: