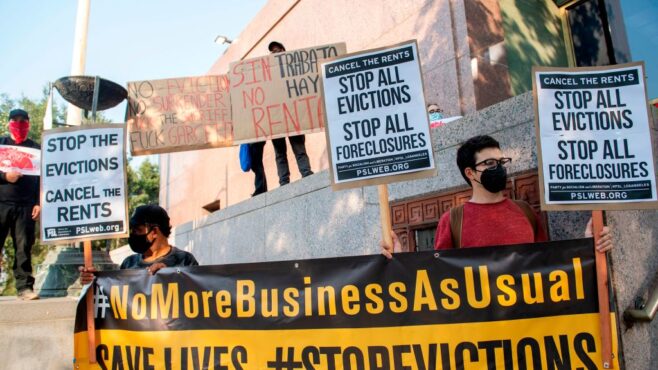 Above photo: Renters and housing advocates in Los Angeles attend a protest to cancel rent and avoid evictions amid the coronavirus pandemic. Valerie Macon/AFP via Getty Images.

About 1.2 million infections and 164,000 deaths could have been averted in 2020 if the federal government had stopped evictions and utility shut-offs, according to Duke University estimates.

Julie Rey has been living on the edge of eviction for much of the Covid-19 pandemic. She’s a 42-year-old mother of two, and her family has also been especially afraid of infection, as her 19-year-old daughter suffers from a comorbid condition and is at greater risk from the virus.

In 2021, what they long feared finally happened. At the beginning of the year, Rey and her 14-year-old daughter contracted the virus, and a judge ordered them out of their home by 20 January. The only mercy was that the gears of eviction did not finish turning until their illnesses had faded. They were able to quarantine away from Rey’s older daughter, and she was spared from Covid.

That would have been impossible living in their car, as Rey and her family are doing now.

“I don’t know what to do,” Rey says as she quietly begins to cry. “All the places I’ve called say they’re all out of resources. Even my attorney I picked up with legal aid, he’s looking, and he said the same thing.”

Rey’s personal tragedy is playing out in St. Tammany Parish, across Lake Pontchartrain from New Orleans. But it’s part of a larger national story, as lower-income Americans have borne the brunt of the pandemic both economically and medically.

This has played out in especially harsh relief in the low-income-housing market, where decades of rising costs and stagnant wages had already left many families vulnerable to eviction. As the in-person service sector got ravaged by the pandemic, their plight only grew worse. Many households were protected by local and state eviction moratoriums, the hefty benefits provided by the CARES Act and then by an uneven CDC moratorium. But as many of those defences wore off in the second half of the pandemic, people like Rey lost their homes.

A new working paper from Duke University finds that the patchwork of housing protections in the US may have exacerbated the pandemic, as widely varying state and local laws left many families to be pushed onto the street and into shelters or crowded them in with friends and relatives. The researchers found that had a strong federal policy been in place from March until November 2020, national Covid infections could have been reduced by 14.2% and deaths by 40.7%. A nationwide moratorium on utility cut-offs would have reduced infection by 8.7% and deaths by 14.8%, the research suggests.

“Both types of policy mechanisms are effective at reducing infections and death rates,” says Kay Jowers, senior policy associate at Duke’s Nicholas Institute. “Not shutting off people’s utilities and not evicting them reduces infection rates for everyone, not just for the housing-insecure. It also reduces the death rate for all.”

Of the 2,217 counties in the data set, almost 79% had a state or local eviction moratorium at some point in the pandemic, and 66.5% had a utility cut-off ban. (Not all US counties are included in the Duke team’s research because the necessary data was not universally available.) In early September, the Trump administration ordered a national eviction ban through the Centers for Disease Control and Prevention, but there are substantial loopholes, and it is not backed by federal enforcement.

There have already been a handful of studies about the efficacy of such interventions during a pandemic where the surest way to prevent infection is to stay home. On both the state level and in the city of Philadelphia, researchers have found that eviction bans help repress the virus.

Jowers and her co-authors’ work is set apart because they also study utility cut-offs, which are seen as a precursor to eviction, and by calculating their findings at the county level. This allows them to control not only federal policy like the CARES Act and statewide eviction moratoriums but also local policies like travel bans and stay-at-home policies that may have affected, say, Philadelphia but not neighbouring Bucks County.

“If a family gets evicted from their home, they’re likely to be combining households with friends or family,” says Jowers. “A doubled-up household increases their contact [with those they can’t] limit their contact with. If those individuals have more external contacts because some of them are essential workers, then that’s going to also increase community spread.”

While eviction bans were implemented across the country in the early months of the pandemic, as the crisis wore on, many states and localities repealed or revised their standards. Rey’s home state of Louisiana is one that ended its moratoriums, although it has instituted other measures like tenant assistance programmes to help fill rent gaps. But that is contingent upon both parties being happy with the idea.

“I had got approved for rental assistance in the state of Louisiana, but my landlord wouldn’t answer the phone to accept it,” says Rey, who was forced out last week. “That’s part of why it went over to eviction court.”

Landlord groups, however, have pushed back against the idea of eviction moratoriums as a policy response to the pandemic. The National Real Estate Investors Association claims that of their members with 50 units or less, about 30% say they will go bankrupt in the first half of 2021 without relief. Landlord associations argue that rent supports are needed, either directly to tenants or to property owners themselves.

“Politically popular policies like eviction moratoria, though well intended, are unsustainable and endanger housing affordability,” says Bob Pinnegar, president and CEO of the National Apartment Association. “Not only do these policies saddle the very residents they intend to help with unsurmountable debt, they force an extremely low-margin industry to absorb the cost of operating housing without incoming funds.”

The Biden administration’s stimulus proposal includes $30bn for rental assistance to help fight off that debt load, along with the $25bn from the December stimulus, which would almost meet the amount estimated for current levels of back rent. The president has also called for making Section 8 vouchers available to all who are eligible, which would help fill the gap between wages and rents. In addition to extending Trump’s CDC eviction moratorium, the new president is calling for a more robust ban to be passed by Congress.

All of that has come too late for Rey. She is struggling to figure out where to go and what to do with her family’s belongings, which are currently in a rental moving trailer. Even worse, now that they have nowhere to go she worries about her at-risk older daughter who hasn’t yet been infected with Covid.