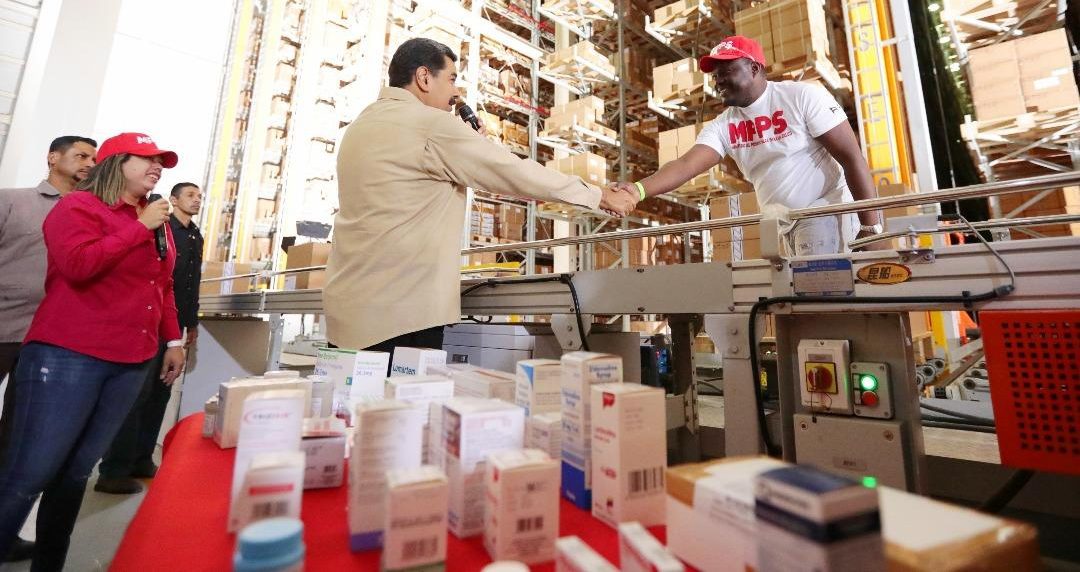 US Withholding $5 Billion Of Medical Supplies In ‘Criminal’ Measure

Maduro’s accusations came at a government re-launch of the pharmaceutical sector.

Merida – The US government is withholding US $5 billion which was meant for the purchase of medicines and raw materials used in medical production, President Nicolas Maduro claimed Wednesday.

Speaking from Miranda State, Maduro denounced that US authorities “have ‘kidnapped’ US $5 billion [in] one of the most criminal, brutal, fascist economic measures which has been seen in the economic history of the world.” “Trump is the person responsible,” he added.

US and European governments have been working on freezing Venezuelan assets in recent months, including CITGO, the US-based subsidiary of state oil firm PDVSA, as well as US $1.2 billion worth of gold held in the Bank of England. According to Washington, these assets are being held to finance a “future government” led by self-declared “Interim President” Juan Guaido and to avoid alleged corruption on the part of the current government. US Vice President Mike Pence recently urged other countries to apply similar measures against Venezuelan assets.

The asset freezes have come alongside sanctions, with an oil embargo imposed in late January and sanctions against the mining sector announced earlier this week.

Maduro’s accusations coincided with a visit by a delegation from the office of the United Nations High Commissioner for Human Rights. The delegation is in Venezuela doing preliminary investigative work and meeting with pro- and anti-government actors in preparation for a possible future visit by UN High Commissioner Michelle Bachelet.

While conclusions have yet to be announced, Bachelet did voice criticisms of oil sanctions imposed by the Trump administration in late January.

“Although this pervasive and devastating economic and social crisis began before the imposition of the first economic sanctions in 2017, I am concerned that the recent sanctions on financial transfers related to the sale of Venezuelan oil within the United States may contribute to aggravating the economic crisis, with possible repercussions on people’s basic rights and wellbeing,” she stated.

Bachelet additionally expressed her “great concern for the magnitude and gravity of the repercussions of the actual crisis on human rights, which also constitutes a dynamic factor in regional destabilization” and underlined the “deteriorating” condition of the health system. The UN human rights chief also took aim at the Maduro government, criticizing what she termed legal irregularities in the detention of citizens by certain branches of the state security forces.

On Thursday, the UN Human Rights Council in Geneva also approved a resolution presented by the Non-Aligned Movement regarding the negative impact of sanctions on Venezuelan human rights.

Jipana is the largest of five warehouses built with Chinese assistance that help supply the Barrio Adentro health program, public hospitals, dental clinics and pharmacies. The other four are located in Barinas, Lara, Aragua and Anzoátegui States.

As part of his plans to stimulate the industry, Maduro announced the creation of a public-private workgroup which will look to fix consumer prices and cost structures, as well as iron out distributive and productive bottlenecks in the sector, hinting at the expansion of a subsidy program based on the Homeland Card program for “those who need it.”

Likewise, the president once again urged the Venezuelan pharmaceutical industry to work towards replacing imports with nationally produced goods. Venezuela’s medical industry is heavily dependent on imports, especially of raw materials and active principles used in medicine production. Access to the global financial system has been hindered by US-led sanctions limiting the country’s ability to pay for imported medicine and exasperating pre-existing shortages in the industry.

In this context, Maduro highlighted international support and trade deals in supplying Venezuelan hospitals and pharmacies, particularly from Cuba, China, Russia, Iran, Turkey, Belarus, as well as the World Health Organisation (WHO).

The Venezuelan leader told the nation that “various” tonnes of medicine to supply the public sector medical network are due to arrive next week from Russia as part of the new bilateral agreements. In late February, 7.5 tonnes of medicine arrived from Moscow with the support of the WHO and the Pan-American Health Organisation, while weeks before over 900 tonnes of medicine from Cuba and China also arrived at Venezuelan ports.

Russian authorities have continued to back the elected Venezuelan government despite mounting pressure from Washington for Moscow to recognise Guaido. Both countries held talks centered on Venezuela this week in Rome, but no concrete agreements were reached.

“No, we did not come to a meeting of minds,” U.S. special representative Elliot Abrams told reporters. “Who gets the title of president” in Venezuela is still a point of contention between the countries, he added. Russian spokespersons agreed that the meeting had been unsuccessful, telling press, “We failed to narrow positions.”

Edited by Ricardo Vaz and Lucas Koerner from Caracas.