“Al Qaeda’s MASH Unit”: How the Syrian American Medical Society Is Selling Regime Change and Driving the US to War

Reports on unproven allegations of a chemical attack in Douma, the Syria city formerly occupied by the Army of Islam insurgent group, invariably rely on a key source: The Syrian American Medical Society (SAMS). Together with the White Helmets, SAMS has been cited by the Washington Post, New York Times, CNN and virtually every Western media organization reporting on the incident. In Douma, SAMS staff have claimed that they treated more than 500 people for symptoms “indicative of exposure to a chemical agent.”

The group also played a central role in shaping the narrative of a sarin attack in Al Qaeda-controlled Khan Sheikhoun in April, 2017, providing biomedical samples to the Organization for the Prevention of Chemical Weapons (OPCW), which violated its stated protocol by accepting evidence without a verifiable chain of custody. That incident prompted the launching of 57 cruise missiles at a Syrian air base by the American military. Almost exactly a year later, a strikingly similar event is said to have tripped the “red line” again, and is likely to trigger a more robust assault by the US and its allies.

SAMS claims to be a “non-political, non-profit medical organization,” and is cited as a credible authority by media reporting on the incident in Douma. Scant published material is available on the organization’s origins as an exile arm of the Islamist-oriented Syrian opposition, its involvement in sophisticated influence operations from the Turkish-Syrian border, or its close relationship to neoconservative elements in Washington and Al Qaeda’s affiliate in Syria.

SAMS is not merely a group of Syrian doctors tending to the wounded in war torn areas, nor can it be considered a objective source on chemical attacks and other atrocities. The organization is a USAID-funded lobbying powerhouse that functions with a single-minded determination to stimulate a US-led war of regime change that will place Syrian Islamists in power in Damascus.

SAMS was founded in 1998 by members of the Syrian American exile community, which is concentrated in the suburbs of Chicago, Illinois. Prior to the 2011 armed rebellion against President Bashar al-Assad, the group led several medical delegations to Syria, presumably cooperating with the government to gain access. A former member of SAMS approached me to complain that the armed revolt prompted a takeover of the organization’s board of directors by sympathizers of the Muslim Brotherhood. She said she and other secular and Christian members resigned from the group as it transformed into what she described as “Al Qaeda’s MASH unit.”

According to SAMS 2015 financial statement [PDF], the organization’s budget jumped from $672,987 in 2013 to nearly $6 million in 2015 — almost a tenfold increase. Over $5.8 million of that funding came from USAID, an arm of the US State Department that boasts its own Office of Transition Initiatives to encourage regime change in states targeted by the West. SAMS Executive Director David Lillie also happens to be a former USAID staffer, as is SAMS Director of Operations Tony Kronfli.

Throughout much of the Syrian conflict, SAMS operations have been overseen by Zaher Sahloul, an ardently anti-Iran operative dedicated to drumming up a war of regime change against the Syrian government. After unsuccessfully lobbying Barack Obama for a NATO-imposed No Fly Zones over Syria, a policy that Hillary Clinton acknowledged would “kill a lot of Syrians,” Sahloul accused the president of having “allowed a genocide in Syria.” Sahloul was a participant in a September 20, 2016 rally in New York dedicated to ramping up conflict with Iran, as well. The rally was organized by the exiled Iranian People’s MEK, a shadowy international organization dedicated to regime change in Iran that has been described as a “terrorist cult.” Neoconservative former Sen. Joseph Lieberman, a recipient of MEK payments, was among the speakers. Days later, the neoconservative columnist Eli Lake hailed Sahloul and his colleagues as “Syrian-Americans Who Stood Up to Iran.”

The SAMS-affiliated American Coalition for Syrian Relief has endorsed President Donald Trump’s call for “safe zones” in Syria, a euphemism for No Fly Zones that would require US air power to enforce. Meanwhile, Sahloul has joined up with the Jewish United Federation of Chicago, a leading opponent of Palestine solidarity organizing, to promote his efforts.

Zaher Sahloul, for his part, has attacked journalistic critics as “the fifth column who have been promoting war criminals,” calling them “the equivalent of the propaganda machine of Hitler.”

Info ops, from Al Qaeda’s heartland to the Beltway

SAMS assistance coordination units send aid and set up hospital in refugees camps and within Syrian territories exclusively held by Syria’s insurgents. In Idlib, the Al-Qaeda-controlled area where SAMS operates alongside the insurgent-run administration, “schools have been segregated, women forced to wear veils, and posters of Osama bin Laden hung on the walls,” according to Joshua Landis, the director of the University of Oklahoma’s Middle East Studies Center. While SAMS claims to operate 100 hospitals in Syria, independent monitoring and evaluation is virtually impossible, as Western reporters seeking access to these areas are routinely kidnapped or killed. In 2015, according to the Washington Post, Chase Bank closed SAMS’s bank account without explanation.

Sahloul has operated a WhatsApp group that appears to have delivered the first images from insurgent activists in eastern Aleppo to international media of Omran Daqneesh, the so-called “dusty boy” whose shellshocked image was immediately plastered across newspaper front pages and upheld as an exhibit of Assad’s unique cruelty. The original images were taken by Mahmoud Raslan, an activist affiliated with Nourideen al-Zinki, an insurgent group formerly backed by the CIA that beheaded a 19-year-old Palestinian captive.

A year later, Omran’s father, Mohammad Kheir Daqneesh, revealed that he and his family had been exploited by insurgent activists. A White Helmet snatched Omran from his arms and posed him in an ambulance, Mohammad Daqneesh declared. He also disclosed that his family was offered a lucrative bribe by a Saudi TV demagogue to come out as spokespeople for the armed opposition, but as supporters of the Syrian government, they refused. Following this striking revelation, Omran was swiftly disappeared from Western view and supplanted by professionally managed child mascots of the Syrian Islamist opposition like Bana Alabed, Noor and Ala, and Mohamed Najem. (Like Bana, Noor and Ala were recently treated to a cuddle-filled photo-op with Turkish President Recep Tayyip Erdogan and granted honorary Turkish citizenship.) 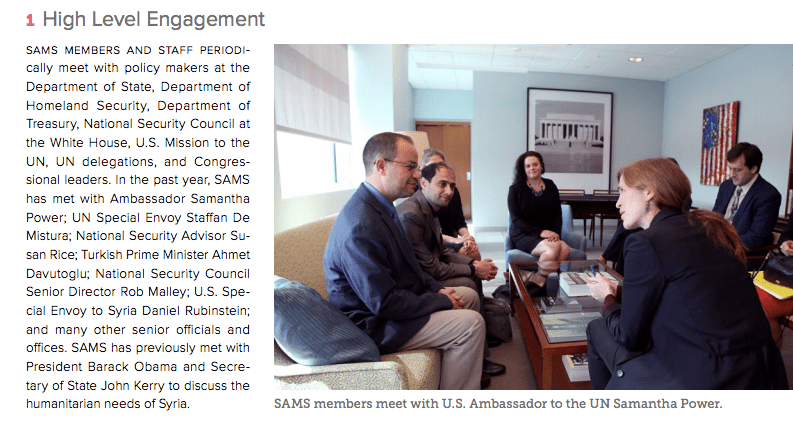 Above: A SAMS promotional brochure features a photo of Zaher Sahloul and Mohamed Tennari meeting with then-US Ambassador to the UN Samantha Power

Back in Washington, SAMS boasts that it has “become a leader in advocacy and policymaker engagement,” lobbying Congress, the State Department and the United Nations for regime change in Syria. “When SAMS speaks, people listen,” reads a quote by an unnamed State Department official published in a SAMS promotional brochure. So much for the “non-political” organization of humble field doctors.

On April 16, 2015, Sahloul and SAMS’s Idlib coordinator Mohamed Tennari testified before the United Nations Security Council and alleged multiple chlorine attacks against the Al Qaeda-held canton of Idlib by the Syrian government. The meeting was orchestrated by then-US Ambassador to the UN Samantha Power, an outspoken advocate of military intervention in Libya and Syria. (Tennari was subsequently identified as a “Syrian field doctor” in an interview with CNN; his work in Al Qaeda-controlled territory was omitted). 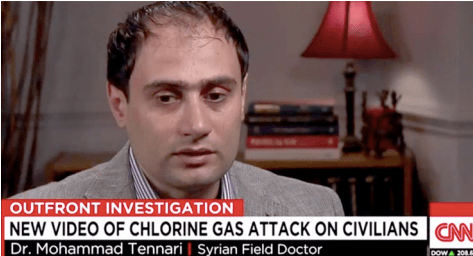 At its annual gala on March 6, 2017, SAMS welcomed former US Ambassador Frederic Hof, the outgoing director of the Gulf-fundedRafik Hariri Center at DC’s Atlantic Center. Before his audience, Hof called for stepped-up arms shipments to Syrian rebels, a US-led No Fly Zone for Idlib, the Syrian province controlled by Al Qaeda’s local affiliate, and for preventing reconstruction of Syria’s shattered infrastructure until regime change is achieved.

Just over a year later, acting largely on claims by SAMS field operatives, the US, UK and France appear to be ready to make the Syrian opposition’s dreams come true. And as a potentially catastrophic war looms, Americans remain entirely in the dark about one of the key organizations driving the push for war.