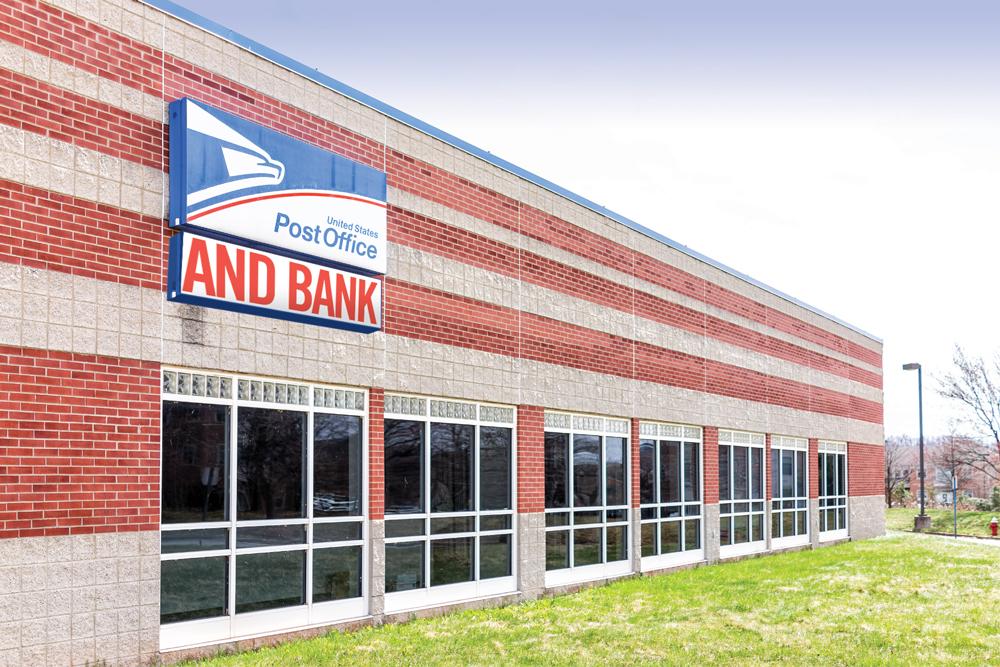 The test allows customers to cash business or payroll checks at the post office and place them onto a gift card.

The United States Postal Service (USPS) has taken the most dramatic step in a half-century to re-establish a postal banking system in America. In four pilot cities, customers can now cash payroll or business checks of up to $500 at post office locations, and have the money put onto a single-use gift card. It’s the most far-reaching executive action that the Biden administration has taken since Inauguration Day.

The move puts the USPS in direct competition with the multibillion-dollar check-cashing industry, which operates storefronts to allow unbanked or underbanked residents to cash their paychecks.

“At first, [the postal worker] said she didn’t think she could take the check,” Rothstein said. “But she read the check into her scanner and it went through.” He didn’t need to show identification or endorse the check. The post office charged Rothstein a flat fee of $5.95, for any amount up to $500.

Several larger check-cashing chains charge a percentage rate that comes out to $15 or more for a $500 check. Walmart charges between $4 and $8 for check cashing.

A generic gift card, an existing product sold at post office locations, can be used like a bank debit card, either to take money out of an ATM (though that would, for now, incur fees), or pay for goods and services either online or at point-of-sale retail locations.

Because the only innovation in the test pilot involves allowing gift cards to be purchased with a business or payroll check, no additional authority from Congress was required. Those who set up the product expansion are confident that it falls within their legal mandate.

Few would have named [Louis] DeJoy as the official who would set in motion the most consequential executive action of President Biden’s first term.

The test pilot is extremely limited—only one post office location in each pilot city is participating—but officials have floated ideas for how it could expand. The card could be reloadable rather than single-use, used to store multiple paychecks over time. USPS could keep track of the card value, accounting for a user’s balance in case it gets lost or stolen. Postal gift cards, currently branded for businesses like Barnes & Noble or Olive Garden as well as the generic Visa card, could be branded as coming specifically from USPS, with no-fee branded ATMs inside post office buildings. And other possibilities have been discussed, like bundling gift cards with a postal money order to pay bills, or making domestic money transfers from one post office to another (the USPS already offers international money transfers to nine Latin American countries, a program called DineroSeguro).

In other words, a few simple expansions would effectively make this product a postal bank account, the first since the original postal banking system shut down in 1967 after 56 years in operation. At its height, four million Americans had bank accounts at the post office.

A modern postal banking system could underprice non-bank financial products and give people with little or no access to financial services the ability to use the USPS network of 31,000 facilities, extending to every ZIP code in the country. Adding revenue for a Postal Service with shrinking mail volume is a secondary benefit.

“Offering new products and services that are affordable, convenient and secure aligns with the Postal Service’s Delivering for America 10-year plan to achieve financial sustainability and service excellence,” said USPS spokesperson Roy in a statement to the Prospect. “This pilot, which is in collaboration with the American Postal Workers Union (APWU), is an example of how the Postal Service is leveraging its vast retail footprint and resources to innovate.”

That collaboration, and the USPS rolling out a key financial-inclusion product that progressives have championed for years, is what makes the announcement so staggering. Postmaster General Louis DeJoy has become a high-profile villain to liberals since taking over last May, condemned for almost immediately causing significant slowdowns of mail, as well as ethical concerns surrounding the USPS awarding contracts to the company he previously ran. DeJoy’s ten-year plan, rolled out this year, would cement this dysfunction by permanently slowing target delivery times and raising prices for some first-class mail, particularly around the holidays.

The APWU has consistently criticized DeJoy. Last Thursday, union president Mark Dimondstein criticized the changes to service standards, saying: “The people deserve the prompt, reliable and efficient mail service promised under the law … We believe management’s response to months of poor performance should be to improve service and regain the public’s trust, instead of this focus on moving the goalposts and slowing service standards.”

Few would have named DeJoy as the official who would set in motion the most consequential executive action of President Biden’s first term. And even fewer would have correctly pegged that he would do it in cooperation with the APWU, one of his biggest antagonists. But the union has been laser-focused on getting postal leadership to embrace banking for many years, seeing it as an attractive product to bring in customers and promote financial inclusion.

In 2016, the APWU successfully negotiated postal banking pilots in its USPS collective-bargaining agreement. However, previous postmaster general Megan Brennan ignored this obligation and dragged her feet on the pilots. The APWU considered filing a grievance, but ultimately decided that, even if it won a pilot, postal leadership would not put in the energy and resources necessary for the project to succeed.

Instead, when DeJoy took over, the union engaged him personally in a series of meetings, pitching the postal banking idea again. In a sign that DeJoy was interested, those meetings soon became weekly events, involving technical staff.

“They listened, they didn’t shut us down,” said one APWU source involved in the negotiations. “They have made the analysis that the future of the USPS lies not in letters but in packages, and they see the expansion of financial services as a companion to the package market.”

One way the APWU got this across, union sources explained, was through an anecdote about another country with a postal banking system, Switzerland. If you order a pair of shoes online in Switzerland and they don’t fit, you can take them back to the post office to return. Not only will they ship the shoes back to the retailer, but they will instantly credit your postal savings account. This fits with the USPS mission of efficiently promoting commerce, and it creates a competitive advantage over other shippers. The USPS leadership obviously saw that as a selling point.

A good sign for the union that DeJoy had real interest in financial services was when a division of the Postal Service attempted to cancel the agency’s DineroSeguro international money transfer program. The proposal got all the way to DeJoy’s desk, and he dismissed it. “They held off, they thought that’s an area they can grow,” said the APWU source.

As for how the APWU managed these delicate negotiations while also fighting the USPS on service standards and mail rate changes, the two sides managed to carry out their work on a parallel track, while acknowledging they will have agreements and disagreements. “If they are willing to advance something we like,” said the source, “we’re not going to shut the door.”

The union initially wanted the debit cards to be reloadable, but ultimately for the test pilot it was decided that they would stick with the single-use cards. The price point of $5.95 is also higher than the original concept, though that could be tweaked later. And while currently, just one location per region is offering check cashing, APWU envisions every post office in an area being able to offer the same financial services.

The pilot was always framed internally as a stepping stone to something bigger, and if the current test is successful, other features would likely be added.

Mehrsa Baradaran, a law professor at the University of California, Irvine and a postal banking expert, said in an interview that the effort was “incredibly safe legally … you have all the authority you need.” She stressed the need for USPS to underprice Walmart on check cashing; currently the price point is roughly a little more for checks under $500. If that’s altered, she said, it could be a successful product. “The post office has way more locations than Walmart,” Baradaran noted.

Among the other options Baradaran thought would eventually be necessary is some sort of security element, in case the gift cards are lost or stolen. One way to do that would be by adding on a Venmo-like arrangement, where balances and debits could be easily tracked and transfers made from point to point. “It’s important down the road to establish the proof of concept of an app,” Baradaran said. “Do it well or don’t do it at all.”

Such a service would require a unique ID but no documentation, allowing housing-insecure people to use the accounts. Additionally, the gift card setup does not contemplate FDIC deposit insurance, but the Postal Service does carry the full faith and credit of the U.S. government. In fact, that security was part of the early advantages of postal banking after its establishment in 1911, before the FDIC existed.

Previously, President Biden’s most impactful executive action involved increasing the minimum wage for federal contractors to $15 an hour. (Thousands of contract workers at Maximus, a call center operator for the Centers for Medicare and Medicaid Services, just secured the new pay increase last week.) But while that has a relatively limited reach, postal banking could bring potentially millions of unbanked and underbanked people into the financial system.

The Prospect’s Executive Action Tracker, which monitors 77 discrete actions that the president can take using their own authority, now lists 13 that have been accomplished, with the rollout of postal banking. Biden has been somewhat reluctant to use his authority to go beyond reversing Trump actions, and there has been a troubling lack of follow-through at some points, most notably with his decision to agree to a patent waiver for COVID-19 vaccines at the World Trade Organization. That process has stalled out, with the Biden administration doing little to move it forward since their announcement in April.

That’s what makes the postal banking pilot so unusual, and so promising. A federal agency is creatively applying its power to benefit the public in a tangible way. That it’s led by a top villain of the Trump resistance is noteworthy, and there could be any number of reasons for that. But motivations aside, what the USPS is doing on financial services could spur the rest of the administration to follow its lead.