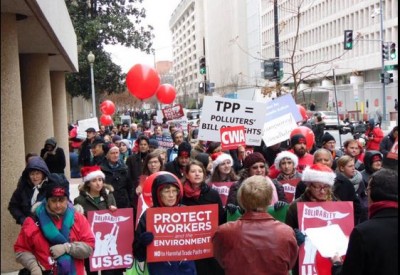 TPP negotiators will be in Washington, DC all week. Tell the US Trade Representative to end the secrecy and release the text of the TPP to the public.

Visit Release the Text.com to sign the petition and to email the trade representatives directly. They must hear from us.

We will no longer tolerate secret negotiations that trade away our rights and our future for corporate profits!

The Trans Pacific Partnership (TPP) has been negotiated in secret throughout the Obama administration. They continue to keep the text secret and classified. This week TPP trade negotiators are in Washington, DC. The 12 countries have been unable to reach agreement as the United States demands extreme corporate power undermining the sovereignty of nations.

The Obama administration has also been stalled on trade on the homefront as Congress has refused to give the administration fast track trade promotion authority. Fast track would allow the President to sign the agreement before it went to Congress and would restrict Congress’ power to review it. It would ensure Congress plays virtually no role in regulating trade as is its constitutional mandate under the Commerce Clause.

On Sunday night Popular Resistance began the week of negotiations with a Light Brigade putting messages on the US Trade Representative’s office in Washington, DC.

On Monday morning members of Popular Resistance held a ‘Sit-in to End the Secrecy’ on the front steps of the USTR office . As Trans-Pacific Partnership (TPP) negotiators and USTR staff arrived for their first day of meetings this week, demonstrators demanded that they stop hiding the text of the trade agreement and instead make it available to the public telling them “secret negotiations are anti-democratic.”

Several activists tried twice to deliver an open letter signed by more than 1,000 people to the trade ambassador but were met with an aggressive removal from the lobby by security personnel. Richard Ochs, a 76 year old former steelworker from Baltimore, was pulled down the stairs and ejected from the building. Ochs exclaimed “I thought that as citizens we had the right to petition the government. This shows how afraid they are of transparency.”

Cassidy Regan, trade organizer for Popular Resistance, remarked that after public pressure the European Union recently agreed to release its negotiating proposals for the Trans-Atlantic Trade and Investment Partnership to the public. The EU wanted to release the full text of the agreement but was blocked by the United States. “The trade agreements being drafted in secret threaten everything from worker rights and wages to public health and access to medicines. The negotiators keep texts hidden because these agreements aren’t made with the public in mind — instead, they serve to give transnational corporations further power to exploit people and the planet for the sake of profit. The unprecedented lack of transparency denies communities’ right to know policies that could impact so many aspects of our lives, for generations to come.”

After several hours of blocking the front entrance and disrupting business by chanting, singing and banging on a cow bell, pots and blowing whistles, the protesters were joined by close to 200 more people from Public Citizen, Citizens Trade Campaign, Friends of the Earth, Sierra Club, National Family Farm Coalition, Friends Committee on National Legislation and labor unions such as the Teamsters, Communication Workers of America, International Brotherhood of Electrical Workers and United Students Against Sweatshops.

The crowd sang and chanted. They had a spirited march around the block carrying banners, signs and big red balloons that said “There will be no fast track.” They let the negotiators know that the American people were united in their opposition to fast track and predicted  Congress would not pass fast track legislation. .

This is the first of several days of negotiations. More actions are expected throughout the week. Online actions are being organized through ReleasetheText.com.

The movement of movements bringing together people concerned about the environment, labor, food and water, Internet freedom, energy policy, banking regulation and so many other issues has been able to stop the rigged corporate trade agreement being pushed by the Obama administration. A critical test will come in the coming months when the new Congress is put in place. We are confident that we continue to work in unity to stop these corporate trade agreements that we can stop fast track and prevent these treaties from becoming law.