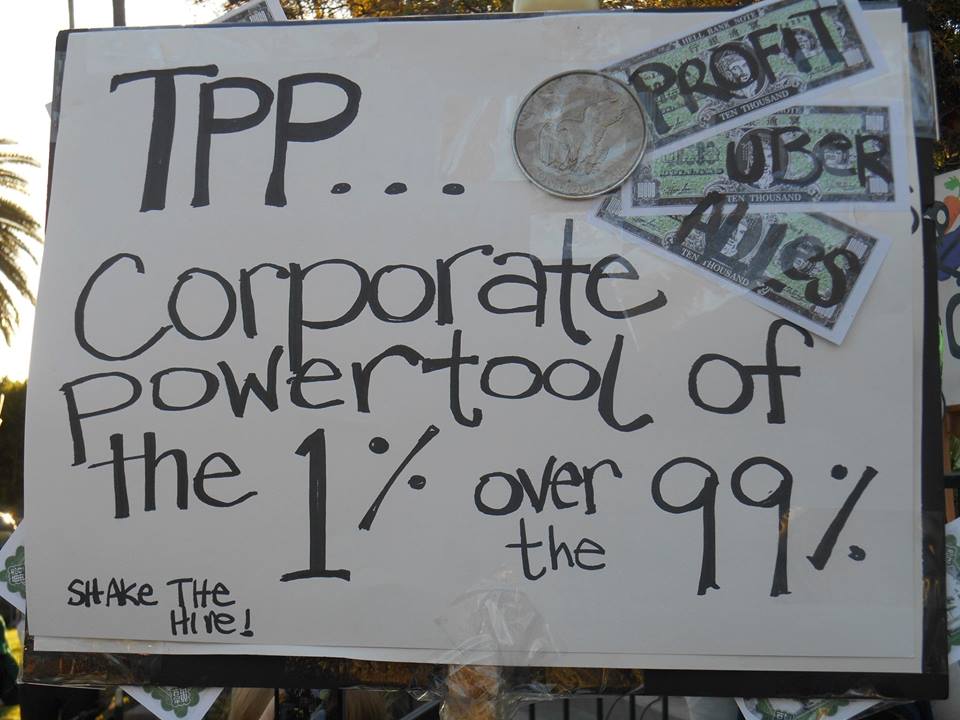 Staff note: Here we go again? As they have done with past trade agreements, Labor is calling for stronger worker protections before they will support the TransPacific Partnership. Will Labor never learn? Even with ‘stronger worker protections in writing, past rigged corporate trade agreements have not protected workers. And even if the TPP did protect worker rights, is that worth supporting an agreement that will harm food safety, raise the cost of medications, end Internet freedom, allow greater environmental destruction and ship more jobs overseas? We do not support the TPP and believe it should be renegotiated in a more transparent and inclusive way that involves civil society groups and protects people and the planet before profits.

Last week 153 Democratic members of Congress – three-fourths of the Democrats in the House – signed a letter to U.S. Trade Representative (USTR) Michael Froman demanding that trade negotiators focus first on protecting the rights of working people to organize before asking Congress to approve the Trans-Pacific Partnership trade agreement.

Currently the negotiations appear to be focused primarily on increasing corporate and investor rights – even as lethal violence continues against union organizers in Colombia following the trade agreement approved by Congress and signed by President Obama in 2011. Past trade agreements have cost millions of American jobs and increased our country’s trade deficit while helping to dramatically increase income inequality.

According to the office of Rep. Rosa DeLauro (D-Conn.) the letters asks the USTR “to do more to protect and strengthen international workers’ rights as part of the Trans-Pacific Partnership (TPP) negotiations.”

In addition, “not a single company fined by the Ministry of Labor for violating the law and workers’ rights has paid up, and companies still are violating worker rights in Colombia with impunity.”

In spite of this record, TPP negotiations include Vietnam, Malaysia, Brunei, and Mexico. These countries have a history of terrible violations of labor rights, yet the USTR is focused on increasing corporate/investor rights instead of worker rights. This affects American workers because corporations use these trade agreements to move jobs away from our democracy to countries that let them exploit workers and pollute the environment for profit, and then come back to the U.S. and sell their products for the same prices while threatening to offshore the jobs of more American workers.

The letter lists just a few of the violations of labor rights in these TPP countries. The members of Congress state in the letter that these countries must publicly implement core labor standards before Congress takes up the TPP. Additionally, the letter says,

“The Administration must refrain from validating such woefully inadequate labor norms and the final agreement should be withheld until these countries embrace the need to reform their labor laws and move aggressively to implement them.

… we believe that it is critically important that the TPP provide for an enhanced framework for protecting workers’ rights to help ensure that the agreement benefits the middle class in this country and protect the rights of workers of our trading partners.”

The letter received literally no news coverage. Even though this vast trade agreement will have a major effect on American workers and our economy, and potentially restructures the relationship between corporations and governments, it receives very little news coverage.