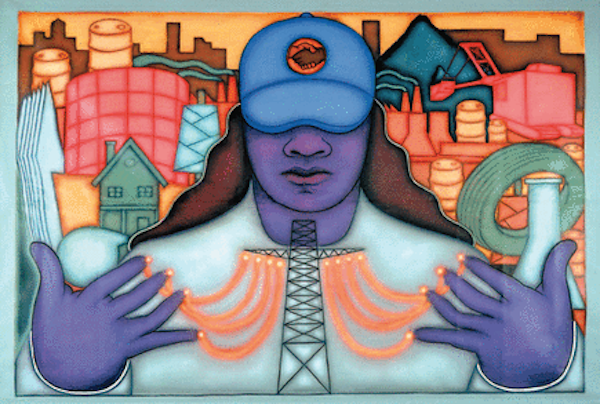 Above Photo: One of five banners entitled The Worker in the New World Order, painted for the founding convention of ICEM (International Confederation of Chemical, Energy, Mine & General Workers’ Unions–now merged into INDUSTRIALL). Dedicated to then-imprisoned Nigerian oil workers. Copyright © 1995. Mike Alewitz

The Business Roundtable, a group of CEOs that lobbies for policies that support the fossil fuel industry, is attempting to restrict shareholders’ rights as utilities and fossil fuel companies face increasing scrutiny from investors over climate change.

Fossil fuel and utility CEOs, facing unprecedented levels of activism from shareholders who are worried about the risks posed to their investments by climate change, have responded by trying to pass legislation that would curtail investors’ rights to register their concerns.

The main purpose of The Financial CHOICE Act is to gut the consumer protections passed by the Dodd-Frank law of 2010, but a section of the bill would produce a significant change in what kind of shareholders are able to file resolutions for changes in the company.

Currently, any shareholder that owns 1 percent of a company, or $2,000 worth of shares – hardly a paltry sum, but one that is within the realm of possibility for many investors – is able to file shareholder resolutions calling on the company’s management to make changes. The resolutions are generally not binding, but when they garner significant support, say over 20%, management tends to take them as serious signals of shareholder sentiment, and often respond accordingly.

The language in the bill would remove the $2,000 threshold, leaving the 1 percent one as the requirement and blocking out all but the biggest, wealthiest investors from expressing concerns to management. The legislation passed the House on a party-line vote last week, and would require the support of Senate Democrats to reach 60 votes and passage,

A group of CEOs which often lobbies for policies that support the fossil fuel industry, the Business Roundtable, has led the effort to insert the language restricting shareholders’ rights. The group sent a letter to Trump economic advisor Gary Cohn advocating for the changes. The letter also called for delaying the EPA’s rules to protect people from harmful ozone pollution, called for an overhaul of the Clean Power Plan, and called for the complete reversal of the Waters of the U.S. rule to prevent pollution of streams, rivers and lakes. Those are all positions that other utility industry trade groups have fought, while individual utilities have sought to avoid the publicity of attacking popular anti-pollution rules.

While it’s impossible to know the degree to which the utility and fossil fuel members of Business Roundtable led the push to gut shareholder rights, it seems likely that they were heavily involved. The Washington Post’s Energy 202 newsletter reported last week that “about 175 of the roughly 1,000 shareholder resolutions submitted to companies in 2016 concerned corporate climate-change policy.”

Nearly every one of the utility and fossil fuel CEOs in Business Roundtable have faced climate-related shareholder resolutions in the past two years, and the percentages of support have been on the rise. Sixty-two percent of Exxon shareholders voted for the company to report its risk exposure under a scenario consistent with holding global warming to 2 degrees Celsius, up from 38% in 2016. Forty-six percent of Southern Co. shareholders supported a similar resolution this year, up from 34% last year.

In the case of at least one of the utility members of Business Roundtable, Florida-based NextEra, the company is forcing captive customers to pay its dues to the trade group.

NextEra owns the monopoly utility Florida Power & Light, which provides electricity to customers in Southern Florida who have no other options for a utility provider. In 2015, FPL’s customers paid $143,692 to fund NextEra CEO James Robo’s membership in Business RoundTable, according to a filing the company made in its rate case. Customers pay those dues annually.

NextEra shareholders have filed multiple climate-related resolutions in recent years, including one in 2016 requesting that the company report the material risks of sea level rise in Florida.

The company’s customers are, it seems, being forced to fund at least part of its strategy to neutralize those challenges to management.