Venezuela; 6D Elections, What’s At Stake And Who Will Win?

Above photo: Indira Alfonzo, the President of the National Electoral Council in Venezuela (center) announces the preliminary results of the National Assembly election early in the morning of December 7, 2020. Margaret Flowers.

NOTE: This article was written the day before the election. The opening sentence was changed to reflect that it was posted after the election. According to Venezuelanalysis, the preliminary results are as follows:

Democratic Action is the alliance of 5 right-wing parties (‘the opposition’) that are negotiating with the Maduro administration.

VU/PV/VPA are the other three opposition parties that are not negotiating with Maduro government.

PCV is the Communist Party of Venezuela that is part of the new Left alliance, the Popular Revolutionary Alternative, composed of 13 parties.

Venezuelans once again headed to the polls on December 6 in what seems to be the mother of all battles for the National Assembly of Venezuela. Since 2015, this institution has been taken over by anti-Chavismo in what was not an anti-Chavismo vote, but instead of a vote of discontent with the economic situation Venezuela was at the time facing. Hugo Chavez said on March 26 of 2006, that “every revolution needs the whip of the counter-revolution, so strike with the whip, we can take it! To each whiplash we will respond with more revolution!”.

The electoral defeat in the national assembly in 2015 was no doubt a devastating whiplash, albeit a defeat that Chavismo immediately recognized. However, many of the people who consider themselves on the left, or Chavistas, who cast what they then called a “protest vote” have come to realize that this defeat for Chavismo was crippling.

Why was it crippling? It gave many of the most anti-democratic sectors of the Venezuelan opposition a seat of power for which they launched their attacks against all other sectors of government. Heads of the opposition such as Leopoldo Lopez, Julio Borges, and Henry Ramos Allup vowed upon taking over the national assembly that the democratically elected Maduro presidency would be forced out within 6 months.

Under this politically arsonist sector of the opposition, the National Assembly became a seat of ungovernability and impunity for terrible crimes. Not only did this opposition National Assembly throw everything at the wall hoping something would stick to force Maduro out, but they went on to pass several unconstitutional and anti-people laws such as privatizations of some of Chavismo’s landmark programs, but also an immunity law for those convicted of right wing sabotage, terrorism, and violence against the constitutional order of Venezuelan society.

Many deputies of the assembly, such as Freddy Guevera, went on to direct and command the violent Guarimbas that cost the lives of hundreds of Venezuelans and caused millions of dollars in property damage. The assembly, being found in contempt by the Supreme Tribunal of Justice, was sidelined by the 2017 National Constituent Assembly elections which were called by Maduro to bring peace in the face of these violent protests. The opposition, having been exposed as violent and fascistic, refused to participate even though the same electoral authorities and guidelines which led to their victory in 2015 were still being utilized.

With tens of thousands of polling centers, candidates, open and televised debates, and a system that has been held up by many organizations as the best electoral system in the world, it is perhaps a little puzzling as to why much of the Western governments have already called the process a fraud, even before the first vote is placed. One wonders as too if their tune will change should the opposition win a majority tomorrow.

The United States, much of the EU, and violent right wing governments in Latin America have refused to send official election observers, and have refused to recognize this democratic process. It is a bit paradoxical that every now and then over the last five years these same actors have been begging for elections to happen, and now that they have been called in a constitutional format, they refuse to acknowledge the process.

This is unsurprising to many, as it is somewhat obvious that these governments, among them include war criminals, neoliberals, drug traffickers, misogynists, racists, and much worse, have no concern for democracy, whether in their own countries or in Venezuela. Venezuela hasn’t used force against another country in decades, yet every day Palestinian children are terrorized by the Netanyahu regime in Israel, yet it is Venezuela who the US is sanctioning and attempting to influence regime change through murderous means.

This is a defining moment in Venezuelan history, a way forward for Chavismo to reinvigorate itself, and for the people to be put in control of their legislature again. Chavismo is here to stay, and these elections will be proof of this; much of the people have not forgotten the difference that Chavismo represents in their life.

First we must speak of the economic war that has been utilized since 2002 against Chavismo, but has been intensified since 2015 using the National Assembly as a vassal for opposition lawmakers to ask the world for sanctions against their fellow Venezuelans. From 2013 to 2018, according to the Banco Central de Venezuela, there was a 944% contraction in income from PDVSA, the state oil company. Venezuela is a country that depends on exporting its oil, this is not a Chavismo problem, nor is it a problem that could be solved in 15 years, although Chavismo made and continues to make important strides in diversification of the Venezuelan economy. 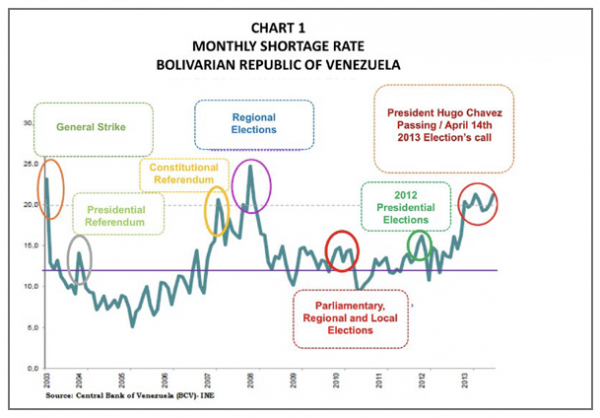 Was there a giant change of course in terms of government policy to explain this collapse in state income? No! Were unilateral coercive measures, economic war, sanctions, and sabotage present that do explain this phenomenon? Yes. Lets look at a couple figures courtesy of Economist Pasqualina Curcio. The level of production, measured by total GDP increased 43% from 1999 to 2015, with the participation of agriculture increasing by 27% from 1999 to 2014. In 2015 when the shortage rate hovered around 30%, GDP was 34% higher than in 2004 with a shortage rate of 7%. The unemployment rate fell by  62.5% to 6% in 2015, a historic low! Food imports in 2014 totaled 7.7 billion, 259% higher than in 2004. 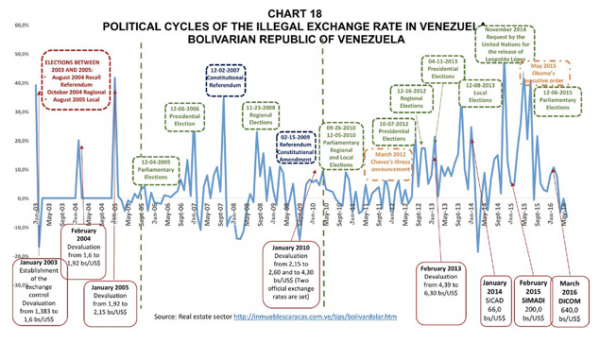 So Venezuelans are working more, producing more, farmers are producing more, GDP is increasing, and imports are increasing, yet shortages rose.. paradoxical! This cannot be explained by any economic variable, not a decrease in production, a decrease in imports, or anything! So even before sanctions, embargoes, and international economic war, it is clear that the local oligarchy was already flexing its muscles and challenging the government, not unlike what happened in Chile starting in 1972. Even Eva Golinger, a former Chavista turned liberal ideologue, wrote in her latest book that with the defeat of the constitutional reform in 2006, she was somewhat relieved because she believed that products would start returning to shelves now that the opposition had twisted the arm of the population into doing their bidding.

(Much of my statistics are for 2018 as I was able to find the most concise collection of stats for that year. Courtesy of the Ministry for Planning)

Even in the face of onslaught by the oligarchy, decades of oil rentierism, decades of subservience to neoliberal formulas, and aggression from the most powerful empire the world has known, Chavismo with its socialist and humanistic economics has produced wonders in Venezuela. As of 2018, there were 47 increases in the minimum wage compared to only 9 in the IV Republic, (its been 11 years without a minimum wage increase at the federal level in the United States).

Social investment in the people continues to be over 75% of the governments budget, while unemployment hovers around a healthy 6% with formality in employment over 60%. 3.3 million homes have been built and given to Venezuelan families at 0% interest or highly subsidized prices, while illiteracy was eliminated by the revolutionary government over a decade ago.

Thousands of communes and more than 50 thousand communal councils have been registered and given support, while Venezuelas first satellite was launched into orbit under President Chavez. The GINI Coefficient which measures inequality was .469 in 1999 and was .377  in 2018 showing a remarkably more equitable distribution of national wealth, while the percentage of homes in extreme poverty went from 11% to 4.3% in the same time frame.

The government budget in 2018 for social security shows a 34x increase from 1999, for education it is 20x, for science and technology it is 38x. Programs and mechanisms such as communal food fairs, the CLAP, Hogares de la Patria, and the Carnet de la Patria continue to struggle against imperial and oligarchic capitalist aggression.

Life expectancy has gone from 71.4 years in 1999 to 75.2 in 2018, while as of now, life expectancy in much of the capitalist world, including the United States, is falling. The public health system went from 5.346 establishments to 26,545 in 2018. It is clear that the dream of Chavez, independence, sovereignty, social justice, and a new socialism, is very much alive in Venezuela and in the hearts of the worlds workers.

In the campaign for this years national assembly election, a new political coalition was formed based around “dissident Chavismo” with sectors of the Venezuelan Communist Party, the Patria Para Todos party, as well as smaller ultra-left sectors. This alliance is called the Popular Revolutionary Alliance and is challenging the PSUV-GPP, they say, from the left.

I understand their frustration, they want an immediate and sweeping deepening of the revolution. Revolutions are not static situations, they are struggles between the old and the new worlds with a million advances and some strategic retreats as well. However, this is not 1917 Russia, imperialism is much more pervasive and predatory today, underhandedness is constantly utilized by the world ruling class establishment and their domestic oligarchic servants. These are the same parties that refused to join the PSUV when it was formed, they were dogmatic then, and they are dogmatic now.

One cannot open up Lenin or Marx and turn to a page and expect the answer contained within the book to apply directly to governance. This is idealistic and not based in reality. Imperialism, the world financial system, soft and hard coups, regional accomplices, domestic terrorists and traitors, corruption, and bureaucracy has tied the hands of the Bolivarian Revolution in some ways, but the way to combat this is not to fight amongst ourselves but to fight against these evils.

My love and support to the PSUV-GPP, all my friends and family in Venezuela, and to the courageous and exemplary representatives of the noble Venezuelan people, Nicolas Maduro, Delcy Rodriguez, Jorge Rodriguez, Carlos Ron, and so many others. Venceremos, Chavez vive!