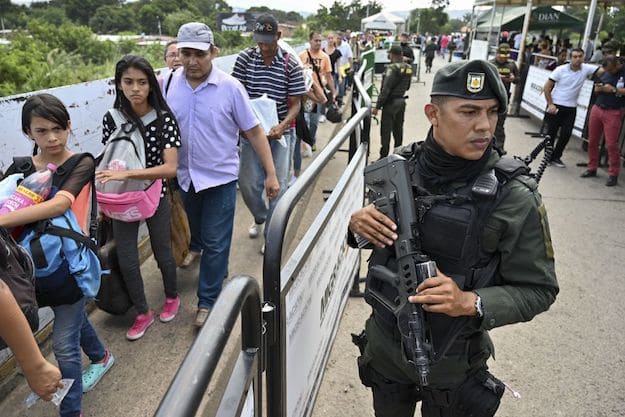 Beginning in mid-March, Venezuelan army units have been attacking and expelling Colombian operatives active in Apure state. These have long used Venezuela’s border region to prepare cocaine arriving from Colombia and ship it to the United States and Europe. The fighting has subsided; eight Venezuelan troops were killed. Seeking safety, 3,500 Venezuelans crossed the Meta River—an Orinoco tributary—to Arauca in Colombia.

The bi-national border is unmonitored and long enough, at 1367 miles, to encourage smuggling and the undocumented passage of cross-border travelers, in this instance the embattled Colombians in Apure.

“Los Rastrojos” are also in the area. They are paramilitaries who make up Colombia’s largest drug cartel. Paramilitaries in Colombia are the products of advice from U.S. Army consultants in the 1960s who claimed that paramilitary capabilities are essential for defeating leftist guerrillas. Colombia’s military has long had charge of paramilitary operations, as verified recently by the prototypic paramilitary leader Salvatore Mancuso. He was testifying virtually before a Colombian judge from a U.S. prison.

The former FARC-EP insurgents active in Apure are combatant groups known by the name of their leader, Gentil Duarte. Having in 2016 rejected the forthcoming peace agreement that the FARC-EP would sign with the Colombian government, they’ve taken up narcotrafficking. Other ex-FARC-fighters who dissented took up arms again in 2019. They call themselves the “Second Marquetalia” and are not involved in Apure.

As the fighting there took shape, the Colombian Army transferred 2,000 troops to the Colombian side of the border. U.S. Secretary of State Anthony Blinken spoke with Colombian President Iván Duque by telephone on April 5. They discussed “their shared commitment to the restoration of democracy and rule of law in Venezuela.” U.S. Ambassador to Venezuela James Story, who is stationed in Bogota, held meetings from February 19 to 26 with Venezuelan opposition leaders Leopoldo López, Julio Borges, Manuel Rosales, and others. They comprise the “Venezuelan Presidential Commission.”

The U.S. Air Force on March 30 and 31 flew four C-17 “Globemaster” troop and equipment-carrying planes to airports in Colombia. Colombia’s Semana newspaper anticipates that the U.S. Congress will soon authorize the sale to Colombia of fighter aircraft worth $4.5 billion. The report laments the “worrisome picture of the Colombian Airforce’s capabilities in comparison with those of Venezuela.”

In late February, Colombian President Iván Duque announced the creation of the “Special Command against Narcotrafficking and Transnational Threats.”  This will be a 7,000-person elite military force with air assault capabilities. Its “certain objective,” according to the Communist Party’s website, is assault on Venezuela.

There are ample precedents for Colombia being the base for paramilitaries trying to destabilize Venezuelan governments. Organization for the seaborne Operation Gideon attack of 2020 took place in Colombia. Plotters in Colombia were allegedly among those who arranged for a drone attack against President Maduro in 2018. The U.S. and Colombian governments in February 2019 tried unsuccessfully to deliver humanitarian aid across the border at Cucuta, Colombia in order to divide Venezuela’s military.

The outcome of the fighting in Apure is unclear. Maybe the Colombian and U.S. governments would utilize any humanitarian crisis in order to destabilize Venezuela’s government. Maybe military intervention is on the cards.

What is certain is that in the Biden era, the U.S. government continues to seek the overthrow of the Maduro government in Venezuela. Equally certain is that the reactionary Colombian government is at the beck and call of the U.S. And it’s true also that the U.S. capitalist hierarchy has its eye on Venezuela’s massive reserves of crude oil, in excess of 550 billion barrels.

But the role of drug-trafficking in serving interventionist purposes, as in Apure, is underappreciated. According to a 2019 United Nations report, Colombia produced 70 percent of the cocaine consumed in the world. Colombia’s cocaine production remains high, even though U.S. military aid under Plan Colombia, which began in 2000, was supposed to have reduced narco-trafficking.

Some 70 percent of Colombia’s cocaine heads to the United States—the world’s leading consumer—via the Pacific Ocean route. But much of the remainder does pass through through Venezuela. The United States uses that reality to serve its regime-change purposes.

The Western Hemisphere Drug Policy Commission is “an independent, bipartisan entity” serving U.S. policymakers.  Its December 2020 report noted that: “Traffickers operate freely in large swaths of the country’s territory [and] The U.S. State Department is offering rewards of $15 million for information leading to [President] Maduro’s arrest and $10 million for information on four other top officials.”

There is great public-relations value in trumpeting about the war on drugs. Nobody likes drug dependency. The United States suffered some 70,000 drug-overdose deaths in 2019. It’s an easy sell to promise to stem the flow of drugs into the United States at the cost of regime-change activities in Latin America.

Public support for U.S. Plan Colombia was similar. After 2000, U.S. taxpayer money readily flowed into what was billed as a war on narcotics. The real purpose was military assistance to the Colombian military as it attempted to defeat leftist FARC-EP guerrillas.

Writing in 2007 about Plan Colombia, Jaime Caycedo, secretary general of the Colombian Communist Party, explains: “For the purposes of strategy, it’s essential to have it understood through continued propaganda that the guerrillas are associated with narcotrafficking and understood too that the war is being fought precisely because of that characteristic.” Drugs, he suggests, become a “demonic phenomenon [and] imperialist military intervention figures as something ‘natural’” (Colombia en la Hora Latinoamericana, Ediciones Izquierda Viva).

The imperialists offer “no tie to history or realities that might explain things,” with the result that, “violence in the form of daily manifestations of repression and super-exploitation of workers appears simply as a consequence of narcotrafficking.”

The capitalists like drug-trafficking for another reason. Selling cocaine yields such vast amounts of money that, once laundered, becomes a major source of liquidity for their financial system.

Former director of the United Nations Office on Drugs and Crime Antonio Maria Costa, writing in 2009, claimed that, “In many instances, drug money is currently the only liquid investment capital.” According to the Samuel Robinson Institute, “the events in Apure show off Venezuela … as a threat, but only in what has to do with allowing the (narco)metabolism of the West to continue functioning.” Journalist Roberto Saviano is cited. He noted that, “Cocaine is a safe asset … an anticyclical asset…. Cocaine becomes a product like gold or oil, but more economically potent than gold or oil. [Without] access to mines or wells, it’s hard to break into the market. With cocaine, no.”

W.T. Whitney Jr. grew up on a dairy farm in Vermont and now lives in rural Maine. He practiced and taught pediatrics for 35 years and long ago joined the Cuba solidarity movement, working with Let Cuba Live of Maine, Pastors for Peace, and the Venceremos Brigade. He writes on Latin America and health issues for the People’s World.