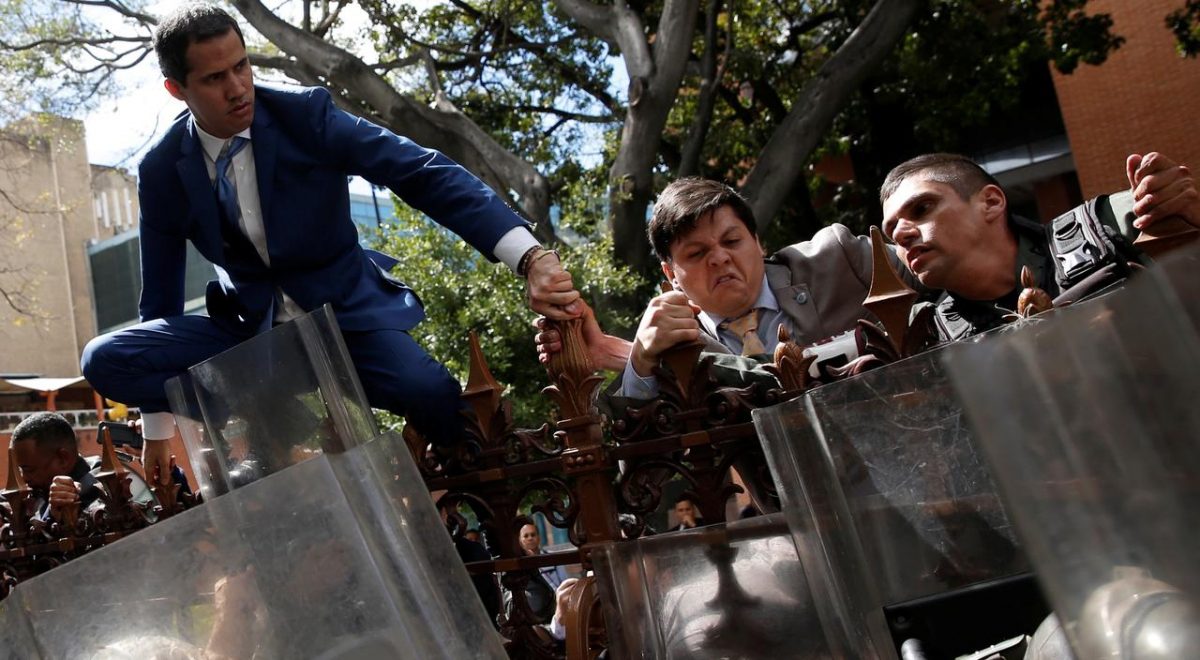 Above photo: Guaido attempted to scale a fence before the vote took place. His claims that he was barred from entering have been disputed. (Reuters)

NOTE: The Orinoco Tribune provides information on why some deputies were kept out of the National Assembly. Juan Guaido was permitted to enter but chose not to, putting on a show outside instead. We added some tweets to the article below to illustrate what happened. From Orinoco Tribune:

“This Sunday, January 5, in the face of the election of the National Assembly (AN) board, the parliamentary session will only allow the presence of deputies who are legally active.

Those under legal procedures may not enter the chamber but their legal alternates will be allowed to enter.

Some of them, however, went to the AN gates, where state security officials prevented them from entering.

he up-to-now president of the AN, deputy Juan Guaidó, requested the entrance of these parliamentarians under the threat of moving the session to another place if law enforcement officers continued denying their entry.

He keeps lying to the press about the reasons for this action because he knows he didn’t have enough votes to be re-elected.”

Pro-Guaido opposition lawmakers have rejected the vote, forming a parallel parliament with US and international right-wing support.

Caracas, VZ – Venezuelan opposition leader Juan Guaido was handed a defeat Sunday in his bid to secure reelection as president of the country’s National Assembly (AN).

With the votes of reportedly 81 of 150 lawmakers, opposition Deputy for Yaracuy State Luis Parra was named president of the legislature. Franklin Duarte of the Social Christian COPEI party will serve as first vice president, Deputy Jose Noriega as second vice president, and Democratic Action (AD) party legislator Negal Morales as secretary. The parliamentary leadership is renewed annually on January 5, according to Venezuela’s Constitution.

The leadership slate was presented Sunday morning by Deputy Jose Brito in opposition to that headed by incumbent Juan Guaido.

Last month, Brito led a group of opposition legislators in breaking with Guaido following a new corruption scandal engulfing senior AN deputies. Brito, Parra, and other deputies were accused of accepting kickbacks from a Colombian businessman purportedly linked to Venezuela’s CLAP food program in exchange for lobbying US and Colombian authorities. The lawmakers have adamantly denied the allegations, in turn accusing Guaido of corruption. Both Brito and Parra were expelled from the First Justice party in the wake of the allegations.

Following his election to the top parliamentary post last January, Guaido proclaimed himself “interim president” of Venezuela and was immediately recognized by Washington and its allies. In the subsequent twelve months, the opposition leader repeatedly attempted to oust the Maduro government by force, while seeing his popularity plummet amid a series of scandals, including his role in the alleged embezzlement of “humanitarian aid” and links to Colombian paramilitary outfits.

On Sunday, Guaido never entered the legislative palace, claiming he was barred from doing so by security forces. A video circulated on social media even showed the opposition politician trying to scale a fence some time before the vote.

However, his version of events has been called into question by other opposition deputies, who did take part in the session and suggested Guaido could have done the same. AD Deputy William Davila, a staunch Guaido loyalist, was seen freely entering the chamber, and later told reporters that all but a handful of lawmakers were allowed to do so. Video footage showed Guaido refusing to enter except in the company of several deputies whose parliamentary immunity had been revoked for alleged criminal offenses. Other top opposition legislators, including AD’s Henry Ramos Allup and A New Era’s Stalin Gonzalez were present for the vote.

More evidence that Guaido was not blocked from entering the National Assembly. He used the fact that 5 other deputies were facing criminal prosecution and barred entry as an excuse for not attending a vote he knew he would lose – all in order to disqualify it. https://t.co/7uwakfbfKo

According to Second Vice President Noriega, 31 opposition deputies joined the ruling United Socialist Party of Venezuela and other Chavista parties in electing the new leadership. No finalized tally has been released and the identity of the dissident opposition lawmakers remains unknown at the time of writing.

Guaido and other opposition members claimed the vote for the new AN leadership was illegal and lacked quorum, labelling it “the murder of the Republic.”

The former AN chief subsequently convened a meeting with loyalist deputies at the headquarters of anti-government newspaper El Nacional. Opposition outlets reported that a parallel parliament had re-elected Guaido as president with 100 out of 167 votes. First Justice’s Juan Pablo Guanipa and Venezuela Project party Deputy Carlos Berrizbeitia were chosen as first and second vice-presidents, respectively. However, no information was provided as to who took part in the vote, though the tally did reportedly include legislators currently outside the country.

Guaido had previously attempted to introduce electronic voting so deputies who are abroad, some of them fleeing criminal charges, could take part instead of their substitutes. The move was struck down as unconstitutional by Venezuela’s Supreme Court.

Look who took a break from stoking the flames of war in the Middle East. One year after proclaiming himself “interim president”, @jguaido took his friends to an opposition newspaper HQ and told everyone he had been re-elected as AN president. That’s enough for Washington! https://t.co/oFMgE0XY53

The European Union also published a statement denouncing “irregularities” in Sunday’s vote and stating it would continue to recognize Guaido as National Assembly president.

“The National Assembly has voted and there is a new leadership board. It was in the air that Guaido was going to be removed by the very opposition,” he told reporters on Sunday, while also criticizing Guaido for “not showing up.”

Speaking to press following his swearing in, Parra indicated his first priority would be selecting a new supervisory board for the country’s National Electoral Council “so the people can decide with their vote” in new legislative elections scheduled for this year.

He also vowed to pursue the “path of reconciliation,” pointing out that “more than 80 percent of Venezuelans want to live in peace.”

An apparently fitting end for self-proclaimed @jguaido, who despite deadly sanctions and hundreds of millions in US support just couldn’t get over the top. pic.twitter.com/86Ww3bjJhQ

Lucas Koerner reporting from Caracas and Ricardo Vaz from Mérida.