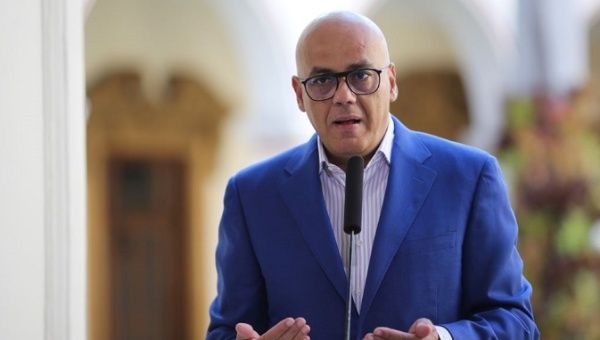 Venezuelan Minister of Communication Jorge Rodriguez reports that two security guards of the self-declared interim president, Juan Guaido have been captured for trying to sell weapons stolen from the National Guard in the run up to Guaido’s failed coup d’état attempt of the government April 30.

At a press conference, Rodriguez presented “overwhelming” evidence of the direct involvement of Guaido in the theft of official weapons used in his failed overthrow of President Nicolas Maduro.

Security personnel of Guaido carried weapons during the April 30 attempted putsch, similar to the ones stolen the same day from the National Guard Park located in the Federal Legislative Palace.

Rodriguez reported that Erick Sanchez and Jason Parisi, in charge of security for the U.S.-backed opposition member, were carrying weapons similar to the ones stolen from the nation’s military.

The minister says the two were arrested while attempting to sell the arms for US$35,000. Along with the Sanchez and Parisi arrests, Eduardo Javier Garcia, cousin to Sanchez, was also taken into custody for aiding the failed transactions.

Investigators confiscated five AK-103 rifles with the serials matching those stolen from the National Guard Park in Caracas.

“This investigation continues its course and in the coming hours we will know more details,” said Rodriguez during the Saturday press conference.

“It can’t be that we are in a permanent dialogue toward peace (with Guaido) and it turns out those in his closest circle are in possession of weapons that belong to the Bolivarian Republic of Venezuela to protect the people, not to attack them,” asserted the communications director.

“Play clean or play fair” Rodriguez stated to the opposition that the Venezuelan government has been in talks with since late May, mediated by Norway, in order to come to accords and stabilize the nation.