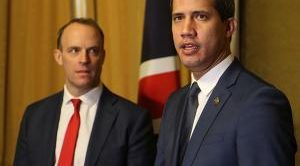 NOTE: Today is the one-year anniversary of when Juan Guaido, with US backing, proclaimed himself the president of Venezuela. As the Venezuelan delegates enter the National Assembly today, they dance in a celebration that Guaido failed.

He left the country amidst one of his worst moments given that he lost his post as president of the National Assembly, his lack of capacity to convene mobilizations, and little credibility among his rank and file as he never fulfilled the any of the announcement/promises he made for almost a year since he proclaimed himself the interim president of Venezuela.

Creating a scenario of international support is then a breath of political fresh air into a situation of sustained difficulties. The tour was staged to convince others that he is recognized as Venezuela’s interim president by several governments, most especially the US, to put him on a pedestal he had lost during the last months.

His agenda, organized by the U.S. Administration, has two goals: first, showing him in Colombia, the main destabilization operative platform against Venezuela. There, he would accuse Venezuelan President Nicolas Maduro of being accomplice to Hezbollah, an organization with a presence in Venezuela according to Pompeo.

Second, taking him to Europe to meet with Foreign Affairs Minister Dominic Raab in the United Kingdom and to be part of the World Economic Forum Annual Meeting in Davos, Switzerland, as well as to meet with Josep Borrell, High Representative of the European Union for Foreign Affairs is an attempt to mask his isolation in his own country.

His tour through Europe owes to the fact that the U.S. Administration is convinced that the European Union has not done everything they could to isolate the Venezuelan Government. Taking Guaido to certain points on the European map seems to be a strategy to achieve more diplomatic support and new measures, such as an increase of the economic blockade.

While Guaido’s photos were being taken the U.S. Southern Command took the opportunity to announce the conducting of a joint exercise with Colombia’s Armed Forces on January 23-29. This exercise will consist of 75 paratroopers and 40 personnel from the U.S. Army in the South conducting an airborne training insertion from aircrafts.

The Southern Command’s news and Guaido’s tour raised again expectations among Venezuelan rightist sectors for a coup and intervention in a context in which, parallel to Guaido’s weakness, an opposition group is consolidating in the National Assembly headed by Luis Parra and in the National Negotiating Table between Government and opposition representatives.

This sector of the opposition is trying to reach agreement, together with the National Government, upon changing the current National Electoral Council directors before legislative elections this year.

The U.S. stance regarding this road map has remained untouched: They are not going to recognize the National Assembly headed by Parra; neither the Electoral Council elected from an agreement between Government and opposition; and, as a result, they are going to reject the call for elections or its results. According to the U.S., their solution is for creating a transition government; this is to say, ousting Nicolas Maduro from power and then call for elections.

Guaido’s tour is then a response to the movements made by Venezuelan opponents who are not following the United States’ guidelines; indicating the closer and closer possibility of achieving the electoral scenario fostered by the Venezuelan Government since last year.

This is an initiative to give back to Guaido his presidential status in allied countries, strengthening the parallel government’s diplomacy, showing that it continues being the main interventionist maneuver in Venezuela of the US.

But there have not been many announcements about the steps that Washington is going to take next. Pompeo did not refer to new actions outside those already practiced, such as economic attacks. He gave free rein to speculation among Venezuela’s right-wing, which is openly requesting for an intervention on behalf of the U.S. Administration.

Possible results of Guaido’s tour will be more visible in the coming days. His return to the country will pave the way for another attempt on behalf of the most extreme part of the opposition. In his previous opportunity, when he went to Colombia on February 2019 with the support of paramilitary group Los Rastrojos, he returned to Venezuela through Caracas International Airport in a trouble-free journey.