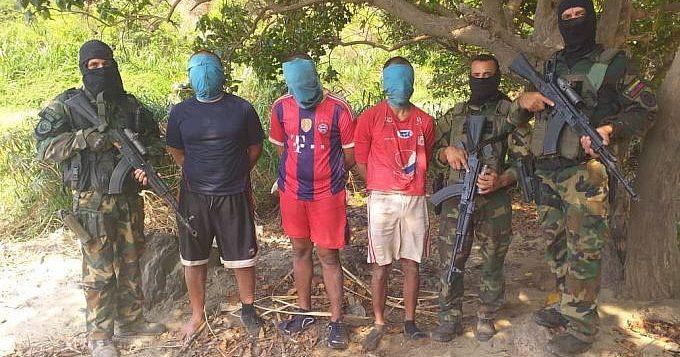 Above: Venezuela arrests suspected participants from ‘Operation Gedeon’ were arrested on Saturday in La Guaira State. From @Ceofanb.

Trump said the operation “was not a good attack,” again denying any US involvement.

The Venezuelan government announced 16 new arrests in the aftermath of a thwarted invasion attempt last week.

Two separate raids on Sunday resulted in three and eight arrests, respectively. There were three other arrests on Saturday and two on Friday, bringing the total of those detained to 39.

On May 3 and 4, two speedboats carrying armed groups were neutralized by Venezuelan armed forces on the shores of Macuto and Chuao, in La Guaira and Aragua States, respectively. The first confrontation resulted in eight members of the paramilitary force killed.

US Army special operations veteran Jordan Goudreau claimed he organized the coup plot, which he called “Operation Gedeon,” together with retired Venezuelan Major General Cliver Alcala. Goudreau announced on social media a “daring amphibious raid” of a force of sixty men with the goal of overthrowing the Maduro government.

Among those arrested were two ex-green berets, who confessed to Venezuelan authorities that their mission was to secure the Maiquetia international airport, kidnap Maduro, and transport him to the United States. The latest arrests reportedly include a nephew of Alcala’s.

Speaking Saturday, Venezuelan President Nicolas Maduro accused Washington and Bogota of having a hand in the failed operation.

“[Local Colombian] authorities in Riohacha, Barranquilla and Alta Guajira were aware of the mercenaries’ presence and the training camps,” he said during a televised address. “Any independent investigation would reveal the Colombian government’s involvement in this armed incursion against Venezuela.”

Venezuelan authorities likewise drew attention to a contract in which the Venezuelan opposition hired Goudreau’s Florida-based private security firm, Silvercorp, to topple the Maduro government in exchange for a US $213 million fees. Opposition leader Juan Guaido, as well as advisors Juan Jose (J.J.) Rendon and Sergio Vergara, appear as signatories in a copy leaked by Goudreau.

The agreement stipulates details regarding the opposition’s payments to Silvercorp in addition to the firm’s future role in “counter-terrorism” and “counter-narcotics” activities under a Guaido administration. Likewise, the paramilitary forces are authorized to deploy deadly anti-personnel mines, strike infrastructure and other economic targets, as well as detain and use deadly force against civilians who “commit hostile acts or exhibit hostile intent.”

On Friday, Attorney General Tarek William Saab announced the government had issued 22 arrest warrants for unnamed suspects involved in the coup attempt and extradition requests for Goudreau, Rendon and Vergara, currently based in Florida and Colombia, respectively.

Saab added that ex-green berets Luke Denman and Airen Berry have been charged with terrorism, conspiracy and arms trafficking. The detained Venezuelans were charged with conspiracy with a foreign government, treason, terrorism, among others.

For its part, the Trump administration issued fresh denials of involvement in Operation Gedeon.

On Friday, President Donald Trump said he knew nothing about the paramilitary incursion, which “was not a good attack.”

“If we ever did anything with Venezuela, it wouldn’t be that way. It would be called an invasion,” he told Fox News in a telephone interview.

Questions remain, however, about possible US knowledge of the operation. On Saturday, the Wall Street Journal published a report citing anonymous sources who claimed that the CIA and Colombian intelligence monitored paramilitary training camps headed by Alcala in Colombia.

The failed coup has also reignited internecine disputes within the Venezuelan opposition camp.

Rendon, who was tapped by Guaido to head a “strategic committee” tasked with exploring regime change scenarios, confirmed to the Washington Post that the opposition had hired Silvercorp to lead a coup attempt. He claimed that he did not follow through on his contractual commitments on behalf of the opposition after Goudreau failed to deliver on pledges of men and financing.

In response, Juan Guaido alleged that Rendon and Vergara moved forward with the plans against his explicit orders, citing concerns over the operation’s “legality.” The opposition leader reiterated that he had no connections to Operation Gedeon and to Silvercorp, despite his signature appearing on a leaked copy of the contract. A video leaked by Goudreau also appeared to show a conference call with the opposition leader and his senior aide, Vergara.

Venezuela’s right-wing Justice First (PJ) party additionally weighed in on the operation, rejecting “the hiring of illegal groups.” In a communique published on social media, the party of former presidential candidate Henrique Capriles demanded that Guaido clarify the events and dismiss all officials with ties to the groups.

Since declaring himself head of a parallel transition government in January 2019 with US backing, Guaido has led several unsuccessful attempts to oust Maduro by force. The controversy over the opposition leader’s possible involvement in “Operation Gedeon” follows a series of scandals dating back to last year, including the alleged embezzlement of humanitarian aid funds as well as links to Colombian drug traffickers.

Edited and with additional reporting by Lucas Koerner from Santiago de Chile.