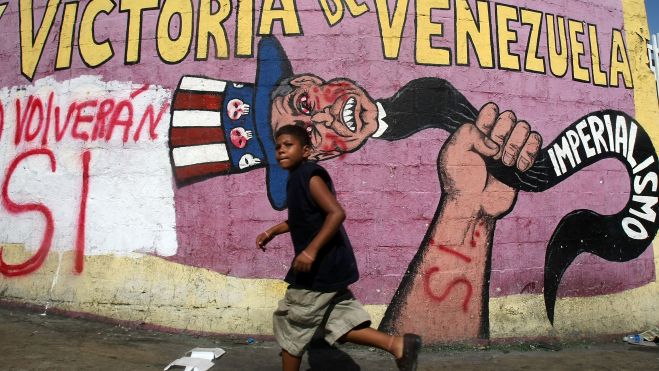 Venezuela: Media Demonizes The Left, Gives A Pass To Right

The propaganda campaign continues in Venezuela where the US has been helping to fund and organize efforts to replace President Maduro, as they did during the administration of President Chavez. False propaganda is an essential ingredient in this campaign as it is important for Americans to remain confused about the democratically elected government in Venezuela.

As Mark Weisbrot of the Center for Economic and Policy studies recently wrote, the most important news coming out of Venezuela are corrections to inaccurate media stories. The New York Times published an article by a favorite of the United States, Leopoldo López. He is currently imprisoned awaiting trial because he led protests that called for violence and the removal of Maduro. Someone like López would be called a terrorist by Americans if he were challenging the government of Saudi Arabia, Israel, Colombia or some other US ally but instead the Harvard educated son of one of the wealthiest oil- families in Venezuela is applauded. But, in is op-ed in The New York Times he misstated some facts and the Times was forced to correct an important one. As Weisbrot explains:

“López had written that “more than 30” protesters had been killed in Venezuela in the recent protests. In fact the “more than 30” number cited by López includes all protest-related deaths, a fraction of whom appear to be protesters.  Although it has not been mentioned in major media coverage, a compilation of press reports indicates that the protesters themselves – not security forces – are responsible for about half of the deaths.”

In fact, this is a common problem in virtually all corporate media reporting on Venezuela. Venezuela Analysis published an interview of “novelist, essayist, historian and playwright Luis Britto García … a titan of Latin American literature and thought” about these issues. They discussed why the media gives the extreme right, which is extremely violent in its behavior, a free pass.  Britto García reminds people of the history of the 2002 coup against Chavez, which was supported by the United States, where the media played a central role in lying to the public. He points out “The Carmona decree—in which the coup leaders essentially gutted the Constitution—was signed by representatives of the major media. This same media also edited out images, stories and facts that didn’t fit their narrative.  During the coup, the television crews even showed up before the repressive acts were performed by the coup leaders.” These are facts not in dispute.

Britto García  points to the media lie of a mass student revolt, when in fact it is a tiny percentage of students, saying:

“… almost one in ten Venezuelans are in higher education. The overwhelming majority of them are in perpetually free institutions. This whole image that the media try to convey of a ‘student rebellion,’ which [jailed opposition leader] Leopoldo López tries to project—the image that all youth are against the government, against [President Nicolás] Maduro, against Bolivarianism—is absolutely false.”

He point to “violent actions like grabbing and holding middle-class people prisoners in neighborhoods with barricades called guarimbas” which are not accurately reported. These are a minority of people in wealthier neighborhoods who form a barricade “they chuck trash or debris or waste so that their neighbors can’t get in our out.” In fact, a review of the 40 deaths that have occurred in Venezuela during the protests show a majority of them were people killed by right wing protesters, often killing people who tried to remove the guarimbas.  Of the 40 deaths only 5 were by government security forces and those have resulted in arrests and investigations of police officials.

Frederick Mills describes the right wing violence as “low intensity war.” He points out that the strategy of violence is failing and people oppose the removal of Maduro, writing:

“The violent protests, despite their prevalence in the news cycle, are not gaining a significant following inside Venezuela. A Hinterlaces poll last week indicates that 86% of Venezuelans believe that ‘any decision [about the Maduro administration] should be electoral’ and only 11% support the ‘salida ya’ [exit now] strategy of the opposition.”

The reality of the source of violence has led a group of forty two Venezuelan human rights activists to “argue that there is a purposeful distortion of the situation by mass media and even some NGOs for political reasons.” In their statement they “condemn the violent protests exercised by minority sectors of the population.” They also urge ” human rights organisations and national and international media to undertake a weighted, balanced and verified monitoring of the situation that Venezuela is going through. Further, that they abstain from manipulating the facts with the aim of defending the positions of those who encourage violent protests to advance toward unconstitutional goals that are contrary to democratic principles.” Unfortunately two leading human rights groups, Human Rights Watch (here and here) and Amnesty International have issued false and biased reports that criticize the government but not the real source of violence, the right wing activists and their political parties.

Myths and false reporting are the foundation of the revolt. At the same time that the right wing violence is misreported or ignored by the corporate mass media, the left is falsely demonized. President Maduro, elected by a larger margin than President Obama’s first election, is described as a dictator. In fact, the right has lost all but one the 19 elections since Chavez came to power in 1999. (The won that was won by the right was a referendum, not a candidate election.) Venezuela is among the most democratic nations on earth, yet US media calls it a dictatorship. The latest right wing media attack is something new that both English and Spanish media are calling colectivos. In this new false narrative the colectivos cause the violence while the “opposition barricaders are the innocent victims of these collectives.” The evidence shows this is the opposite of the truth.

This tactic is not only being used to falsely accuse the government and its allies of violence, but also to demonize one of the most important developments in Venezuela — direct and participatory democracy that is seen in collectives. Tamara Pearson highlights multiple articles making these false claims and concludes:

“The private media is using the concept to demonise the real collectives in Venezuela; the social organisations – feminist collectives, community organisations, environment and education collectives, cultural groups, mural painters and so on; which with Chavismo have grown, multiplied, and united around general support for the Bolivarian revolution.”

The false narrative and the complicity of the media and human rights groups in perpetrating it allows the violence to escalate. Pearson summarizes the impact:

“Meanwhile, the violent opposition groups attack and destroy the symbols of the Bolivarian revolution: community televisions, the housing mission (yesterday), the environment ministry, ambulances (today in Merida), public transport, PDVSA [petroleum] trucks (today), blocking roads from farming areas to urban to prevent goods from being transported (in Bailadores), burning food trucks, and much more. Their aim is not just to intimidate, but to stop government institutions and social organisations on a practical level from getting on with other things. The violent opposition sectors are not farmers, bus drivers, teachers, producers of anything, builders, etc, so they can’t strike in order to bring things to a halt, they can only use violent barricades to stop others from working.”

People who want to be accurately informed about what is really happening in Venezuela cannot rely on the corporate mass media or US human rights groups. It is important to look beyond those sources of information to find the truth. Here are two useful sites, Popular Resistance, Venezuela Analysis, the Center for Economic and Policy Analysis and the North American Congress on Latin America.

Americans are being manipulated for a reason. The right wing is not only constantly losing elections but its protests are failing and unpopular even among the middle class and some of the wealthy. There may come a time when an excuse is created to send the US military into Venezuela. The American public needs to be confused for this to happen. The US military going into Venezuela (or a US ally like Colombia doing so) would be an epic disaster that would ultimately fail because the social movement in Venezuela is so deep, but out of desperation to regain control of Latin America, the United States may do something stupid and a well-informed US public will be essential to stopping such a disaster.