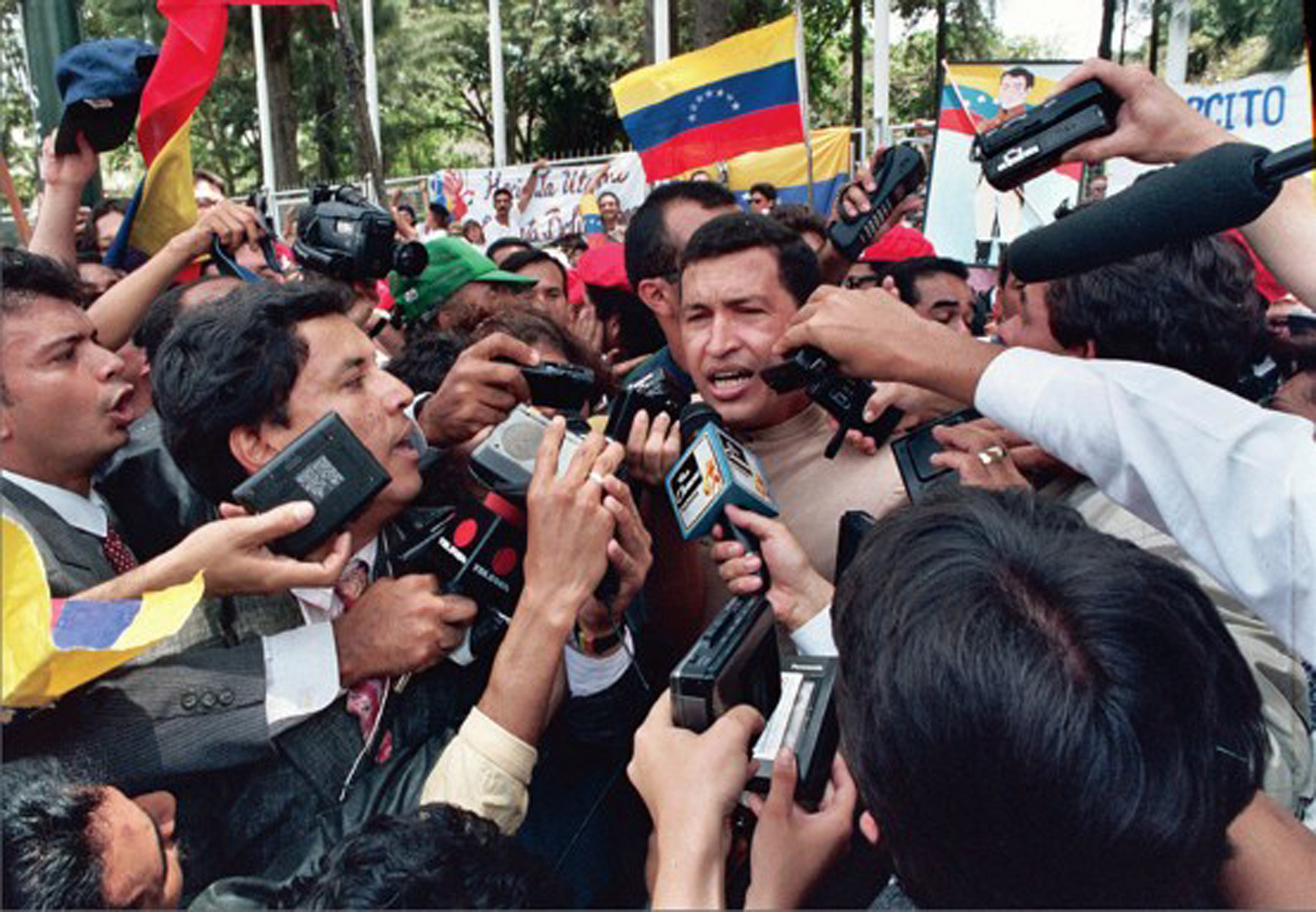 On January 25, two days after Random Guyidó declared himself President of Venezuela, the lack of planing in the U.S. coup attempt was already obvious:

My impression is that Trump was scammed. It was long evident that he gives little attention to details and does not think things through. Most likely Bolton, Pompeo and Rubio presented him with a three step plan:Phase 1. Support the self declared president Guaidó; Phase 2: … (wishful thinking) …; Phase 3: Take half of their oil!
…
Bolton and Pompeo are both experienced politicians and bureaucrats. They likely knew that their plan was deeply flawed and would require much more than Trump would normally commit to. My hunch is that the soon coming mission creep was build into their plan, but that they did not reveal that.

The U.S. coup planners and their Venezuelan puppets had hoped that the Venezuelan military would jump to their side. That was wishful thinking and unlikely to happen. They also thought up some “humanitarian aid” scheme in which pictures of trucks crossing a long blocked bridge would soon shame the Venezuelan president into stepping down. That was likewise nonsense.

Unless the U.S. is willing and able to escalate, the coup attempt is destined to fail.

‘Western’ media now recognize that phase 2 of the coup plan is in deep trouble. Today the Guardian, Bloomberg and the New York Times all describe growing frustration with the lack of success.

[T]hree weeks after Guaidó electrified the previously rudderless opposition movement by declaring himself interim leader, there are signs his campaign risks losing steam.An anticipated mass defection of military chiefs – which opposition leaders admit is a prerequisite to Maduro’s departure – has not materialized, and Maduro’s inner-circle has begun claiming it has weathered the political storm.

Since Juan Guaido declared himself interim president three weeks ago and offered amnesty to officers who abandon Maduro, more than 30 countries led by the U.S. have hailed the move, waiting for the military to follow. There hasn’t been a rush to his side.
…
In a country with more than 2,000 generals and admirals, only one top officer — who commands no troops — has pledged allegiance to Guaido.
…
This is a major reason why the revolution isn’t moving as quickly as some had hoped when Guaido electrified the world on Jan. 23 with his declaration. This has led to impatience and finger-pointing. U.S. policy makers and those around Guaido — as well as leaders in Brazil and Colombia — are eyeing one another and worrying about failure. Officials in each camp have said privately they assumed the others had a more developed strategy.

[The opposition’s] goal was to bring the supplies into Venezuela, forcing a confrontation with Mr. Maduro, who has refused the help. This would cast Mr. Maduro in a bad light, opposition leaders said, and display their ability to set up a government-like relief system in a nation where the crumbling economy has left many starving, sick and without access to medicine.But there was no dramatic confrontation.

The “aid” delivery failed, according to Bloomberg, for lack of planning and coordination:

Worry about what comes next has intensified. At a meeting in the U.S. embassy in Bogota, Colombia, last week, military, intelligence and civilian leaders from both countries discussed ways of moving humanitarian aid into Venezuela. There was a sense of frustration in the air, according to a participant who agreed to discuss it on condition of anonymity.The U.S. said it was paying for the aid but wanted Colombia to find trucks and drivers to move it in. The Colombians said no one would accept the mission because the Venezuelan military would arrest them. The aid remains in warehouses near the border.

At similar meetings in the Colombian border city of Cucuta, a person who attended said the dynamic was the same — the U.S. expecting Colombia to find the means to deliver the aid and the Colombians saying they can’t.

The opposition is only now thinking up its own crazy scheme for delivering the “aid”:

In Cúcuta, members of the opposition say they are considering options to physically force the shipment into Venezuela.Omar Lares, a former opposition mayor in exile in Cúcuta, said organizers want people to surround an aid truck on the Colombian side and accompany it to the bridge. A crowd of thousands would be gathered on the other side to push through a security cordon, move the containers blocking the bridge, and accompany the aid into Venezuela.

“One group over there, one over here, and we’ll make one large human chain,” he said.

And what does he think the battalion of Venezuelan soldiers between the two groups will do? Just step aside and allow an invasion of their country?

The struggle could make for some marketable TV pictures but it would not achieve anything. The lack of planning is daunting even to the lobbyists in Washington DC:

“The opposition has created immense expectations, and it’s not at all clear they have a plan for actually fulfilling them,” said David Smilde, a Venezuela analyst at the Washington Office on Latin America.

The U.S. coup plotters and their Venezuelan proxies seem to recognize that there will be no imminent change:

Addressing a congressional hearing, the US special envoy on Venezuela, Elliott Abrams, claimed “Maduro and his band of thieves” were finished. He claimed international pressure meant “there is a storm brewing inside the Maduro regime that will eventually bring it to an end”.But while Abrams said Washington was “hopeful and confident” of Maduro’s demise he admitted it was “impossible to predict” when it might come. The US would maintain pressure “over the next weeks and months”, he added, suggesting a quick resolution is no longer expected.

Juan Andrés Mejía, an opposition leader and Guaidó ally, admitted that goal “could take some time”.

The little spontaneous support the Random Guyidó had in some parts of the population is already lessening. Yesterday’s demonstration he had called for saw less attendance than the one on January 23. He now says that he will force the ‘aid’ crossing on February 23 but he does not seem to have a real plan to achieve that:

President of the National Assembly Guaido also promised the country that US-delivered humanitarian aid will “enter the country no matter what” on February 23, issuing an “order” for the military to allow it to enter. However, military leaders have dismissed these calls, with the Central Defense Region tweeting in response that the armed forces would not take any orders from an “imperial lackey.”“One month after the swearing in we have done it. This February 23 the humanitarian aid will enter the country. The Armed Forces have 11 days to decide if they are on the side of the Venezuelans and the Constitution or on that of the usurper,” he claimed in reference to President Maduro.

If the U.S. does not do more than it has done so far the government under President Maduro can sit this out. The sanctions and the lack of oil revenue will create many immediate problems. But in a few weeks Venezuelan oil will have found new buyers. Fresh money will come in and new sources for imports of medicine and staple food will have been found.

Over the same time the Random Guy will lose support. The party he nominally leads only won 20% of the votes. The other opposition parties were never informed of his plan to declare himself president. Their support for the step was lukewarm and will cool further. They may in the end support the mediation talks Maduro has offered and which the UN, Uruguay and Mexico also support. The talks could lead to new parliament and/or presidential elections in a year or two and thereby solve the situation.

The U.S. would not be satisfied by a compromise solution. Trump is now committed to ‘regime change’ in Venezuela. But how can he do it?

Waging an open war against that country would be very messy, expensive and difficult to justify. To start and support a guerilla war – Elliott Abrams specialty – takes time also costs a lot of money. The chances to win it are low. Moreover Trump wants to get re-elected but could lose many votes over both scenarios.

What else then can he do?