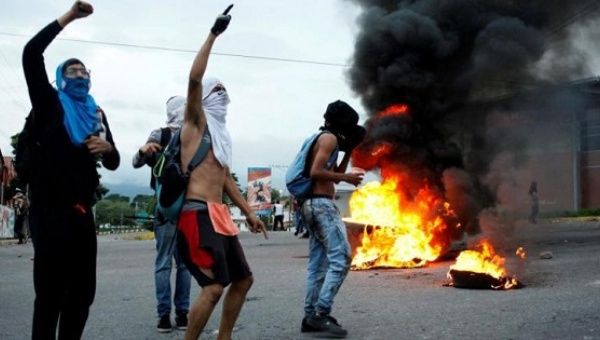 Above Photo:Opposition supporters shout as they burn tires during a protest to demand a referendum to remove President Nicolas Maduro in San Cristobal, Venezuela, May 18, 2016. | Photo: Reuters

The Venezuelan opposition has not produced their expected results with their violent protests.

The problem of the Venezuelan right is to have proposed an objective without the correlation of necessary forces. Although in reality the decision was not Venezuelan, but a U.S. decision, where the strategic and operational level of the current actions resides.

I see no correlation because, to be brief, a government can’t be ousted without either the weight of the popular classes or the Bolivarian National Armed Forces, FANB. And today, close to ninety days since the beginning this cycle, they still do not have any of those two variables.

It does not mean that they have abandoned their policy towards these two dimensions. In the case of the working classes, already convinced that they can not add to their political call to remove the government, the opposition has decided to hit them even harder with economic suffocation. Scenes from the recent burning of a food store, where 60 tons of goods were decimated, exemplify their actions.

They seek to sharpen the material conditions that open the doors to the looting that they organize with their own gangs.

Regarding the FANB, they have opted for several movements at a time. One has been the systematic armed attack, both on the main base of Caracas (La Carlota), and on barracks and battalions in different parts of the country.

The last recorded action took place on Tuesday night in Acarigua, where weapons were stolen and a soldier was killed. Another has been the attempt of permanent demoralization through attacks on social media. A third element, which began at the beginning of the cycle, was to publicly call upon the FANB to ignore the government’s orders and join in the coup.

Julio Borges, president of the National Assembly, did it again on Wednesday, and offered to pardon the soldiers who joined them. Finally, and as always occurs in any movement, they have worked in the shadows to achieve the breakdown of a sector of the armed forces.

The problem is that this sum of tactics has not produced their expected results. Failing to get the support of actors of weight in the FANB, their actions will be prolonged, which seems to be what they’re preparing for.

The hypothesis of prolonged conflict would have two central elements: the political and the armed.

In political terms, they have already announced, in addition to ignoring the government of President Nicolas Maduro and the National Constituent Assembly, to advance in the creation of new public powers. This means trying to set up a parallel government. In order to legitimize this line, which is already under development, they have summoned the plebiscite for July 16th, before the National Constituent Assembly, where one of the questions will be the formation of new powers and a government of unity. Whether the plebiscite will be legal or not is irrelevant, or how many people will vote. What is important is announcing and validating that strategy internationally.

The problem will be to give real weight to powers. It is not enough to announce plans such as these, which is a recurrent practice on the right. The response of the international alliances will be important, as well as the deepening of violent strategy. For the latter, there is an advantage and a problem.

The advantage is that they have worked to legitimize their violence, which they have largely achieved, particularly internationally. For this, they count on the active participation of the mass media, which serves as part of the machinery of imperialism.

In Venezuela, according to this narrative, there are no paramilitaries, trained shock groups, gangs of criminals financed to destroy. There are just a group of students, people starving and young people who are resisting against “dictatorship.” And they justify all violent acts, such as stealing a helicopter and throwing grenades on the Supreme Court of Justice, as alleged self-coups of the government itself.

The problem they have is that it is not enough to legitimize, it is also necessary to have material force in the field. And while it is true that they have deployed large-scale actions for several days in different cities, they do not seem able to hold these positions in a scheme —  as “liberated territories,” for example.

They have the advantage of the senses at an international level, but not so clear at the national level. Their violence wears them down and exposes them to rejection.

This scenario would be prolonged. Their violent actions, for the moment without a name, could take a political identity and deploy their armed structure in a public way. This could even differentiate them from the opposition parties, as they already sketch the difference between Democratic Unity Roundtable and the “Resistance.”

They have two rear lines to feed this structure: Tachira state and Colombia. It is difficult picture an end to this strategy. Some leaders of the right have a glimpse of what they are projecting. Like Juan Requesens of the Justice First party who affirmed in a recent forum: “To achieve a foreign invasion we have to pass this stage.”

There are other questions that will be solved within the next few weeks. One is whether the right — or at least part — will register its candidates in early August for governor elections in December. If not, it would be a further confirmation of the point of no return, of impossibility of solving the conflict through a dialogue between parties. The hypothesis of prolonged conflict would be made clearer pending a break in the FANB or a foreign intervention of another level. If they register candidates, it would be an indication that the final resolution would have an electoral part.

The scenario will also have changes depending on the result of the National Constituent Assembly on July 30. A high participation would give legitimacy and political base to chavismo. An opposite scenario would sharpen the confrontation.

The right wing will do everything possible not to arrive until that date, and that day they will most likely start up a siege at polling stations, roads, transport, with the deployment of its armed structure and public display of its new tool under construction: Committees for the Rescue of Democracy.

The National Electoral Council has already announced that they will protect each polling place. Once the scenario is set, the cycle that began in early April does not seem to have a close resolution. The United States has decided to push Venezuela to its political, social, cultural, communicational and armed limits. They want to take back – through the right in government – political power, subordinate the economy to their interests and deploy a massive rematch on a historical movement.

Chavismo is facing a complex, comprehensive war, to which we must respond with intelligence and a full commitment, as former President Hugo Chavez did, to the creative powers of the people.