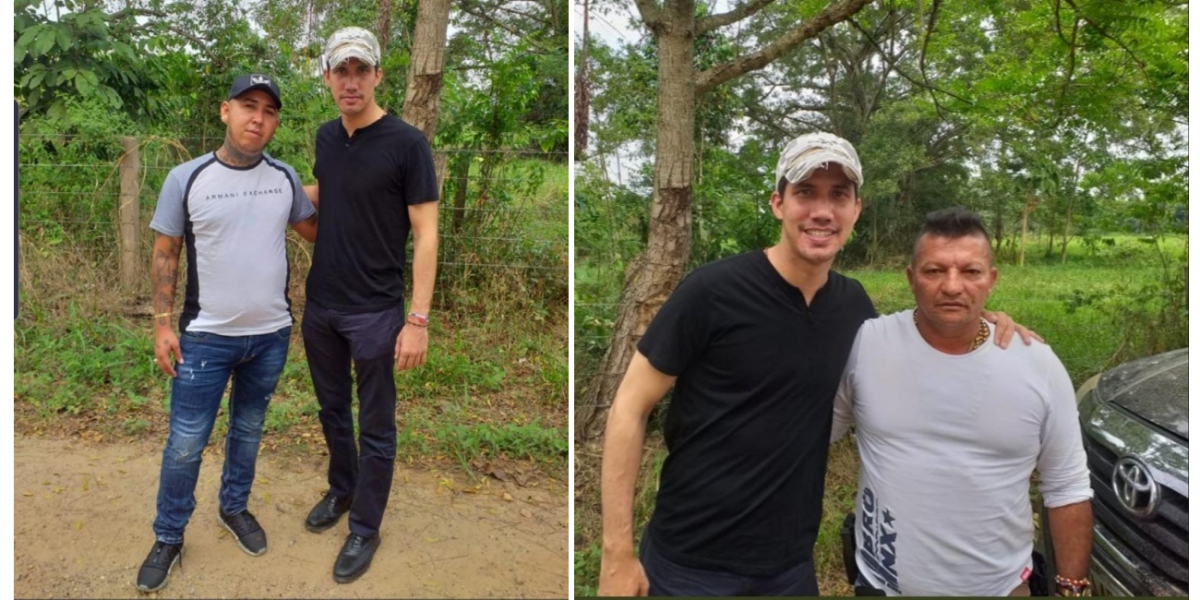 Above Photo: Self-proclaimed “Interim President” Juan Guaido was reportedly aided by paramilitaries in crossing the border in February. (@wilcan91)

Los Rastrojos have been accused of drug smuggling, extortion, and targeted killings.

Tarek William Saab told reporters on Friday that a prosecutor had been tasked with investigating links between Guaido and Colombian paramilitary group “Los Rastrojos,” which operates in the Colombian province of North Santander.

The head of the country’s National Assembly became embroiled in controversy after photos surfaced on Thursday showing him posing with high-ranking figures of Los Rastrojos.

Guaido, who declared himself “interim president” in January, crossed into Colombia on February 22 in anticipation of a US-led effort to force “humanitarian aid” across the Venezuelan border.

According to human rights activist Wilfredo Canizares, who published the photos, Guaido was aided by Los Rastrojos, which controls the illegal border crossing points in the area, known as “trochas.”

“We had said it from the start: Guaido’s entry into Colombia in February was coordinated with Los Rastrojos,” Canizares wrote on Twitter.

Canizares is the director of Colombian human rights organization Progresar, which works in the North Santander region bordering Venezuela. He went on to claim that the paramilitary group had imposed a curfew in the Guaramito sector bordering Venezuela ahead of the opposition leader’s arrival. Colombian outlets have confirmed the authenticity of the pictures, with La Silla Vacia further claiming that Guaido entered through a territory known as Los Rastrojos’ “Golden Gate.” Guaido, Canizares added, was transported by Los Rastrojos to the soccer field in Aguasclaras where he was received by representatives of Aguasclaras, where he was received by representatives of the Colombian state.

When pressed about the compromising pictures, Guaido denied any relationship to the drug lords, claiming that many people had asked to pose for pictures that day.

“I took hundreds of photos that day,” Guaidó told Colombian outlet Blu Radio. “It was hard to know who was asking for a photo. Misconstruing these photos means playing the Maduro regime’s game.”

For its part, Colombia’s Foreign Ministry has denied having any role in Guaido’s crossing of the border, though it admitted that he entered via “one of the unauthorized paths in Puerto Santander municipality.” Upon arriving in Colombia, Bogota claimed that Guiado “immediately” regularized his status with migration authorities and was provided with “a security arrangement for dignitaries.”

Los Rastrojos leaders Quintero and Duran were both arrested by Colombian authorities in June. Human rights groups allege that the men are responsible for running a chop house in the region, in which some 100 people have been disappeared and 150 killed.

The photos with paramilitary leaders are not the first public relations scandal to marr the opposition leader in recent months. An investigation by Miami-based outlet Panampost in June revealed that Guaido’s envoys to Colombia had embezzled funds worth hundreds of thousands of dollars earmarked for soldiers who had heeded Guaido’s call to desert and cross into Colombia on February 23.

The Venezuelan government also reacted to the revelations, with President Maduro calling them a “tremendous scandal” and evidence of Guaido’s “criminal alliance with drug traffickers.”

Ever since his self-proclamation, the opposition leader has unsuccessfully attempted to oust the Maduro government, most recently through a failed military putsch on April 30. Venezuelan judicial authorities have revoked his parliamentary immunity and opened several criminal investigations against him, including for “treason,” ”embezzlement,” and violating his Supreme Court-ordered travel ban.