By Moon of Alabama, Informationclearinghouse.info
May 1, 2019
| Educate!
Venezuela – Random Guyaidó’s New Coup Attempt Turns Out To Be A Dangerous Joke2019-05-012019-05-01https://popularresistance-uploads.s3.amazonaws.com/uploads/2017/12/popres-shorter.pngPopularResistance.Orghttps://popularresistance-uploads.s3.amazonaws.com/uploads/2019/05/vencoup3-s.jpg200px200px

April 30, 2019 “Information Clearing House” –  The Random Guyaidó who the Trump administration tries to make president of Venezuela just launched another coup attempt against the government.

He announced his intent in a series of tweets around 6:00 am local time (machine translated):

People of Venezuela began the end of usurpation. At this moment I meet the main military units of our armed force initiating the final phase of Operation Freedom.

Venezuelan people we go to the street, national armed force to continue the deployment until we consolidate the end of the encroachment that is already irreversible.

The national armed forces have made the right decision, they have the support of the Venezuelan people, with the endorsement of our Constitution, with the guarantee of being on the right side of the story. To deploy the forces to achieve the cessation of usurpation.

People of Venezuela, we need to go out on the streets together, to support the democratic forces and to regain our freedom. Organized and together mocilícense the main military units. People of Caracas, all to La Carlota.

Guaido also posted a short video which shows talking into the camera with some 30 soldiers standing behind him. 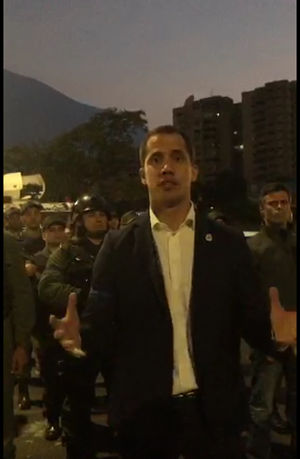 Some members of the armed forces released Leopoldo Lopez, an opposition leader under house arrest since he, in 2014, organized violent protests against the government. Guaidó and López went to the La Carlota airforce base near Caracas. Lopez tweeted (machine translated):

Venezuela: The final phase has begun for the cessation of usurpation, Operation Freedom. I have been released by the military to the order of the Constitution and of President Guaidó. I’m at the La Carlota Base. All to mobilize. It’s time to conquer freedom. Strength and Faith

López is, like Guaidó, a creature of the U.S. of A. He was also involved in the 2002 coup attempt against then President Chavez.

It is not clear Guaido and Lopez entered the air base. A person from the government said they are only on a highway.

A video posted by some TV station shows a platoon of armed and masked soldiers at a road block.

The Venezuelan Minister for Communication Jorge Rodríguez says the coup will be defeated (machine translated):

To this attempt was added the far-right coupe and assassin, who announced his violent agenda for months. We call on the people to stay on high alert, along with the glorious Bolivarian National armed forces, to defeat the coup attempt and preserve the peace. We will win 2/2

The Distibuidor Altamira is a highway exit near the affluent business and living district Altamira in eastern Caracas.

Some, but not all, Internet access from/to Venezuela is disabled.

The chief of the armed forces of Venezuela chimes in (machine translated):

We reject this coup movement that seeks to fill the country with violence. The pseudo political leaders who have placed themselves at the forefront of this subversive movement, have employed troops and policemen with weapons of war in a public thoroughfare of the city to create chaos and terror

News of the coup comes shortly after Reuters reports that the Blackwater founder Erik Prince is looking for money to set up a mercenary army to attack Venezuela:

In private meetings in the United States and Europe, Prince sketched out a plan to field up to 5,000 soldiers-for-hire on behalf of Venezuelan opposition leader Juan Guaido, according to two sources with direct knowledge of Prince’s pitch.
…
A person familiar with the administration’s thinking said the White House would not support such a plan.
…
One of Prince’s key arguments, one source said, is that Venezuela needs what Prince calls a “dynamic event” to break the stalemate that has existed since January, …

No “dynamic event” happened so far.

It has now been confirmed that Guadió and Lopez did not enter the La Carlota air base. It is under control of government forces. Some soldiers are said to have been “deceived”.

The metro of Caracas was shut down by the government.

A short video and a photo show a few low rank soldiers on a highway bridge with a carton of bananas and a basket of machine gun ammunition. Besides one machine guns they are armed with normal rifles and pistols. They are marked with a blue armlet or masks as Guaidó supporters. 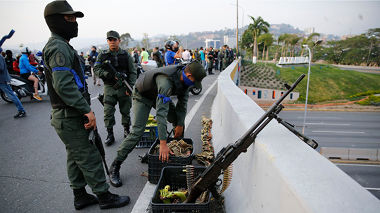 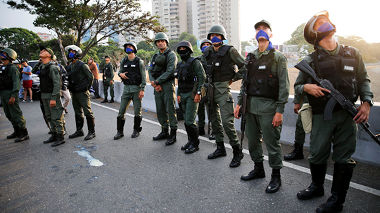 Another short video shows Lopez, somewhat frustrated, on a highway bridge with a handful of soldiers and a few journos.

CNN diverts from the official U.S. government line and Marco Rubio isn’t happy about it. 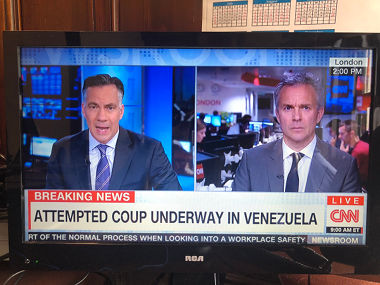 Chavista supporters of President Maduro have surrounded the President’s Miraflores Palace to prevent the coup plotters from capturing it.

Nerves of Steel! I have spoken with the commanders of all the REDIs and ZODI of the country, who have expressed their total loyalty to the people, to the Constitution and to the fatherland. I call for maximum popular mobilization to ensure the victory of peace. Venceremos!

Guaidó moved to the Plaza Altamira, a place of regular opposition protests in a wealthy quarter, and speaks to a minor crowd.

There are claims, including by Marco Rubio, that Guaidó supporters have taken the La Carlota Base. (La Carlota’s official name is Generalissimo Francisco de Miranda Air Base.) These reports are false. The small gang of Guaidó soldiers and some Guaidó supporters are on a highway bridge near the entrance of the air base. The base is in the hand of government forces. The opposition never entered it.

There are no reliable reports that any additional military besides the 30 or so men on the bridge have switched to Guaidó.

Someone points out that the soldiers supporting Guaidó carry M4 Colt assault rifles. The official assault rifle of the Venezuelan military is the Kalashnikov AK-103. Back in February there were a number of flights from Florida to Venezuela which delivered weapons to the opposition.

It is becoming clear that this coup attempt is no more than a stupid PR campaign. Here is a map of the whole ‘coup’ scene which plays in a small area of the wealthy Altamira district of Caracas. 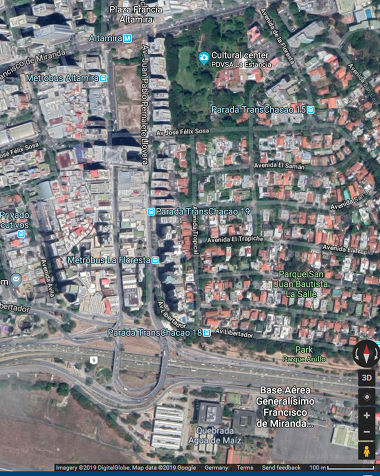 At the bottom of the map is the La Calota air base, also known as Generalissimo Francisco de Miranda Base, which Guaido supporters tried to enter. They threw rocks against the guards until tear gas drove them away. Directly north of it runs a highway east to west. The two highway bridges on which Guaidó’s soldiers stand are crossing the highway right next to the base. Some 500 meters north of the highway bridges is Plaza Altamira (the upper blue point) where Guaidó spoke to some supporters.

The highway bridges can be seen in this video taken from north of the highway looking south across the bridges towards the airport. In the video some fireworks go off to which nervous Guaidó supporting soldiers on a bridge respond (1 2 vid) by firing a few shots into the air.

The whole coup attempt was run within a 500 x 200 meter corridor with nothing of significance happening outside of it. A dangerous propaganda stunt but so far nothing more than that.

This slight modification of the Guaidó/López picture above seems appropriate. These dudes are mere comic figures, wannabe fantasy heroes. 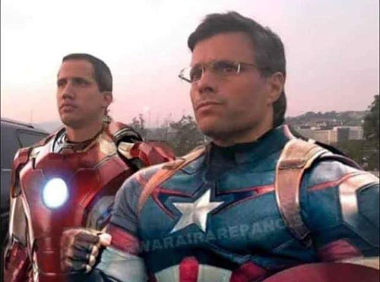 A small group, tiny military and police officers decided to kidnap SOME GNB vehicles, armaments and ammunition. They broke in this morning and they bet on the Altamira dealer
Weapons of War, rifles and machine guns were placed, betting on the roads through which the citizens move. It is a coup attempt, no doubt, of a mediocre magnitude
80 percent of the troops who came to this call were deceived. He sought to bring chaos and death to a group of country soldiers who were deceived into committing a terrorist act
It is a coup attempt of a very small and negligible magnitude. We have given immediate response: all the commands of the #FANB, of the components, of the tactical units, operative, of the Redis, Zodi, of the militia were immediately reported
80 percent of those who were taken there, deceived, left on their own and reported with their natural controls.
The majority of the military with weapons have left the place and have gone to the Plaza Altamira, where they are reediting everything that we live in the year 2002
We will not allow any aggression against the law, institutionality, democracy and the Constitution. The Republic’s weapons are to defend their sovereignty and independence.
Responsiblity for any bloodshed and violence to the fascist and anti-patriotic leadership, which does not deserve respect from Venezuelans or FANB, because they try to use military for their own purposes.
“Miraflores cannot be reached by violence. Who arrives in Miraflores for violence, will be overthrown by violence, “says Vladimir Godfather Lopez, Minister of Defense of #Venezuela

(FANB, Redis, Zodis are abbreviations for the Venezuelan army and other security forces.)

Guaidó seems to have neither a base nor large scale military support nor access to significant military equipment. If that does not change this coup attempt is likely to fail within a few hours.

(This post will be updated above when new information becomes available.)