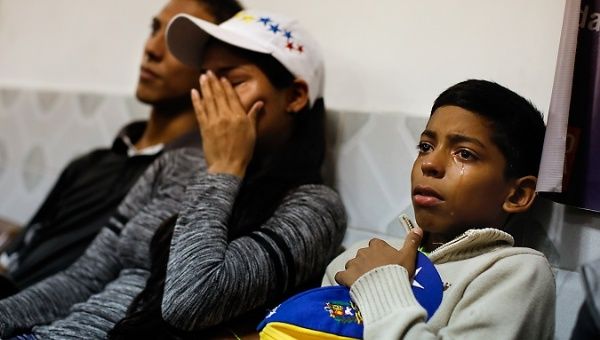 Venezuela Sanction To Kill: How US Blockade Is Taking Venezuelans’ Lives

Above Photo: Sanctions on Venezuela are obstructing medical treatment to people resulting in deaths. | Photo: Reuters

The sanctions imposed by the U.S. on Venezuela is killing people in the country and risking lives of millions by depriving them of basic necessities.

While continuous and intensified sanctions against Venezuela by the United States aim to put pressure on President Nicolas Maduro’s administration they are mostly hurting the country’s population, of which at least 40,000 deaths have been recorded, according to a study released by the Center for Economic and Policy Research (CEPR) in April 2019.

However, the latest sanctions by Washington against Venezuela come as a culmination of almost half a decade of U.S. aggression by multiple successive administrations seeking to put an end to decades of leftist rule in the oil-rich South American country.

In 2015, the former President of U.S. Barack Obama signed a decree designating Venezuela an “unusual and extraordinary threat to the U.S. National Security.”

Few months into the presidency of Donald Trump, the sanctions and economic warfare against Venezuela intensified and their consequences increased.

“We find that the sanctions have inflicted, and increasingly inflict, very serious harm to human life and health, including an estimated more than 40,000 deaths from 2017–2018,” the CEPR study said.

The report also mentioned that “these sanctions would fit the definition of collective punishment of the civilian population as described in both the Geneva and Hague international conventions, to which the US is a signatory. They are also illegal under international law and treaties which the US has signed, and would appear to violate US law as well.”

The study pointed out that nearly all foreign exchanges are needed for importing medicine, food, medical equipment, etc. The earning from oil exports are spent on basic healthcare of Venezuelan people who are being denied all these including life-saving goods.

According to a survey by the National Survey on Living Conditions (ENCOVI by its acronym in Spanish), more than 300,000 people were considered at risk due to lack of access to medicines or treatments.

Apart from medical emergencies, food shortages are also affecting people. Basic necessities like water and sanitation are taking a hit due to the same reason giving rise to diseases, risk of premature death.

The U.N. revealed that the most vulnerable groups are children, pregnant women, elderlies, Indigenous people, women and adolescent girls, people with disabilities, and/or LGBTQ people.

The President of the Latin American Foundation for Human Rights and Social Development (FUNDALATIN), Eugenia Russian denounced the serious threat to people’s lives due to the blockades.

She traveled to Argentina in May with a group of five Venezuelan children and their families. The children suffer from serious liver diseases but the blockade has prevented them from accessing specialized medical assistance vital to them.

For more than 10 years, an international health cooperation program was maintained between Petroleos de Venezuela (PDVSA), the country’s oil company and the government of Italy, which allowed Venezuelan children and patients to move to the European nation to be treated and undergo bone marrow transplantation.

However, the health program with Italy was executed through the CITGO company, a subsidiary of PDVSA. However, the recent aggressive sanction regime of the Trump administration saw the freezing of US$7 billion in assets owned by CITGO in January 2019.

This resulted in blockade of funds needed to be sent for treatment of children. In May, Portugal’s Novo Banco halted a transfer of US$1.7 billion from Venezuela because of the sanctions. Venezuelan Foreign Minister Jorge Arreaza said that the money was meant for medicines and food.

The health program assumed by the Venezuelan state allowed performing about 397 bone marrow transplants, while another 487 patients received treatment for their disease and subsequent transplantation till now.

The children who went to Argentina for treatment received funds from that very health program. After several medical evaluations in Venezuela, these families traveled to Buenos Aires to receive transplants and post-transplant treatments at the Italian Hospital in the Argentine capital.

The U.S. sanctions have been repeatedly condemned by the United Nations and its experts. Alfred de Zayas, the first U.N. rapporteur to visit Venezuela for 21 years said the sanctions are “crimes against humanity.”

“Modern-day economic sanctions and blockades are comparable with medieval sieges of towns. Twenty-first-century sanctions attempt to bring not just a town, but sovereign countries to their knees,” said de Zayas.