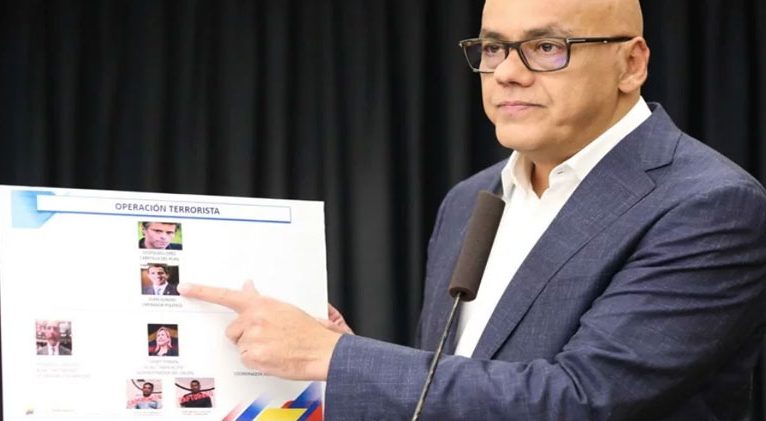 Note: The Orinoco Tribune reported, “The minister referred to the state of drunkenness in which Juan Guaidó presented himself last Friday night, to [alternate delegate Yanet] Fermin’s residence, where DGCIM (Venezuelan Military Intelligence) officials were present looking for her.” Here is how Communications Minister Jorge Rodriguez described the incident:

Deputy Guaido, trying to make another media show in front of the fugitive Deputy, led a tiny mob of right wingers protesting the “dictatorship” but in a video one of the agents dealing with Guaido tells him that he want talk to him because he smells of alcohol and the video shows Guaido not in his most sober state.

Telesur reported another opposition leader First Justice’s Jose Brito told reporters on Tuesday that Guaido “does not have moral, ethical or judicial capabilities, because he’s corrupt.” He went on to say: “There is a rebellion inside the National Assembly against Guaido, because he’s corrupt.” Brito added that 70 deputies have written a letter to Guaido demanding he render accounts of the February humanitarian aid funds – another scandal implicating the opposition leadership. He was referring to reports in June that Guaido’s representatives in Colombia had embezzled hundreds of thousands of dollars earmarked for soldiers who had heeded the opposition call to desert on February 23.

Another report revealed that Guaido had crossed into Colombia, ahead of the “humanitarian aid” effort, with the help of infamous paramilitary and drug trafficking outfit Los Rastrojos. Guaido was seen in videos and pictures with members of the group, which has been accused of drug smuggling, assassinations and extortion.

Venezuela’s Comptroller General, Elvis Amoroso, announced that this office is opening an investigation into Guaido and his associates over the alleged misappropriation of state funds.

Venezuelan Communication Minister, Jorge Rodriguez, revealed Saturday details of a terrorist operation that was intended to be perpetrated against the Gran Mariscal Sucre Headquarters and the Zonal Command No. 53 of the Bolivarian National Guard in the state of Sucre.

This operation was carried out by members of the right-wing party, ‘Voluntad Popular,’ led by Leopoldo Lopez and Juan Guaido, and organized by the deputies of the National Assembly of Venezuela, Janet Fermin and Fernando Orozco.

From the press room Simon Bolivar in the Palace of Miraflores, the communication minister presented evidence of the terrorist plan that sought a “bloodbath” in at least the state of Sucre with different acts of aggression and which would be assisted by several armed groups.

Rodriguez said opposition deputy Orozco held several meetings with members of the police in the state of  Sucre with the intention of recruiting them to carry out the operation, including Sixto Salamanca, alias Soublette 9 and Jose Miguel Yegüez, alias Cazador. They are currently in detention and their testimonies reveal the details and those involved in the failed act.

He pointed out that on Dec. 5 and 10, two meetings were held where Orozco, Fermin and Salamanca participated, in which the order issued by Guaido was given for this operation to take place in Sucre and would also be operated in the state of Barinas.

“Orozco said in a video that if some guards or army personnel are killed, they will generate a skirmish to cover up the rotten pot of corruption and embezzlement of all the denunciations that are made. Orozco’s solution to this scenario is to take two barracks, kill people and thus end Christmas, erasing the corruption scandal in which Juan Guaido is submerged,” Venezuelan minister explained.

Venezuelan Minister of Communication, @jorgerpsuv said they would capture everyone involved in the terrorist plan that was trying to attack Venezuela to hide the acts of corruption in which Venezuelan right-wing members are involved. pic.twitter.com/5eZ0Y673Xf

Venezuelan Minister of Communication, @jorgerpsuv said they would capture everyone involved in the terrorist plan that was trying to attack Venezuela to hide the acts of corruption in which Venezuelan right-wing members are involved. pic.twitter.com/5eZ0Y673Xf

Rodriguez also showed several videos where the deputy Orozco indicated that they had weapons to execute the operation and that the financing also came from Colombia and should be managed by Guaido but the order was given by the deputy Fermin, who is being denounced for being involved in these terrorist actions.

In conclusion Rodriguez said that “fortunately we prevented it and we will continue to prevent actions that threaten the peace of the Republic” and added that “the Venezuelan people are at peace, sharing as a family this Christmas season, so since “the national Government does not destabilizing actions will be allowed.”