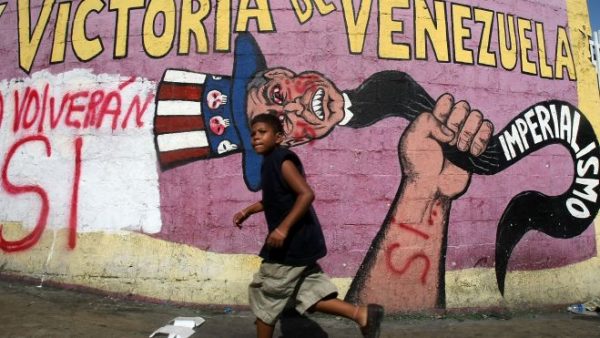 Venezuela, The Small Country That Frightens The US

Clearing The FOG Radio Discusses Venezuela, Tells You What You Do Not Hear In The US Media

President Obama recently declared the small South American country of Venezuela to be a security threat to the largest empire in the history of the world. And the US commercial media fails to question this declaration. On this show, we discuss in depth why Venezuela frightens elites in the US. We talk about the Venezuelan economy, her struggle for radical democracy, the recent coup attempt, the upcoming elections and why Obama’s administration is working so hard to weaken Venezuela. Our guests are Alex Main of the Center for Economic and Policy Research and Professor George Ciccariello-Maher of Drexel University.

Venezuela, The Small Country that Frightens the US with Alex Main and George Ciccariello-Maher byClearingthefog on Mixcloud

Invisible No More by George Ciccariello-Maher

Alex Main is Senior Associate for International Policy at the Center for Economic and Policy Research in Washington, D.C. In his work at CEPR, Alexander focuses on U.S. foreign policy toward Latin America and the Caribbean and regularly engages with U.S. policy makers and civil society groups. His areas of expertise include Latin American integration and regionalism, U.S. security and counternarcotics policy in Central America, U.S. development assistance to Haiti, and U.S. relations with Bolivia, Ecuador, Honduras and Venezuela. His analyses on U.S. policy in the Americas have been published in a variety of media outlets such as Foreign Policy, Los Angeles Times, NACLA, Dissent and the Monde diplomatique. He is regularly interviewed by international media such as CNN en español, Telemundo, Al Jazeera English and the Canadian Broadcasting Corporation.  Prior to CEPR, Alexander spent more than six years in Latin America working as an international relations analyst. He holds degrees in history and political science from the Sorbonne University in Paris, France.

Dr. George Ciccariello-Maher joined the Drexel community after having taught political theory at U.C. Berkeley, San Quentin State Prison, and the Venezuelan School of Planning in Caracas. Everywhere that he has lived, from Caracas to Oakland, has impacted his approach to teaching, research, and how he understands the world more generally.

His research and teaching center on what could be called the “decolonial turn” in political thought, the moment of epistemic and political interrogation that emerges in response to colonialism and global social inequality. His first book, We Created Chávez, is a theoretically rich “people’s history” of contemporary Venezuela which locates the origins of current political dynamics in the long-term history of Venezuelan social movements, demonstrating that Hugo Chávez was not the cause, but rather the result, of a broader and more fundamental transformative process.

His second book project, Decolonizing Dialectics, seeks to contribute in a theoretical register to what his first book analyzes practically. In it, he plumb s the history of political thought for a radicalized understanding of the relationship between conflict and group identity (in the work of Georges Sorel), further charting the decolonization of this very conception and its projection onto a global framework (in the work of Frantz Fanon and Enrique Dussel).

He teaches a range of courses from the history of political thought to what is called “comparative political theory,” which poses a direct conversation and even conflict between standard, canonical, and largely European texts and those texts emerging from colonized spaces as direct critique of both traditional views and even the very existence of the canon itself. Further, in an innovative course entitled “Political Theory from Below,” he brings together Latin American political theory and political theory of the African Diaspora (including within the United States) with the practical activity of organic intellectuals and social movements. This approach is one that encourages students to leave behind the realm of pure theory and enter instead into rich conversation with the empirical and everyday world.

This dedication to real-world politics means that he frequently contributes journalistic writing to such publications as Counterpunch, MRZine, and Venezuela Analysis, ZNet, and Alternet among others, and he has written op-eds for the Philadelphia Inquirer and Fox News Latino. He appears regularly in media outlets ranging from community radio to NPR, from Al-Jazeera, CNN, Time Magazine, the Christian Science Monitor, and Fox News. His dedication to taking non-Western theory seriously leads him to take seriously his task as a translator, and he has translated dozens of texts by Enrique Dussel and others.