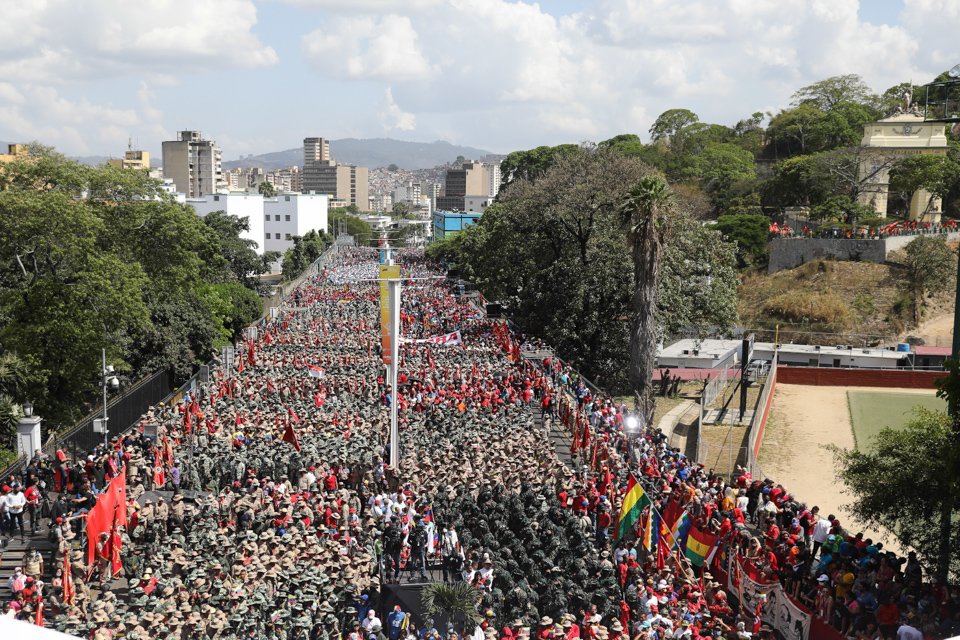 Above Photo: A large-scale march ended in Miraflores Palace in Caracas to commemorate the overturn of the 2002 coup. @partidoPSUV.

Twenty years ago, an outpouring of popular support overturned the coup attempt and secured the return of Hugo Chávez.

Caracas, Venezuela ‒ Big crowds took to the streets of Caracas on Wednesday, April 13, to mark the twentieth anniversary of a short-lived coup.

On April 11, 2002, US-backed civilian and military elites ousted democratically elected President Hugo Chávez following a massive media campaign and false flag violence. A self-proclaimed “transition government” took power the next day and was endorsed by Washington and a handful of other countries.

However, a massive popular response in the ensuing 48 hours, especially from popular neighborhoods on the hillsides of the capital, pushed loyal military sectors into action. The coup was defeated and Chávez returned to the presidency in the early hours of April 14, 2002.

To commemorate the coup defeat’s twentieth anniversary, two Chavista marches featuring tens of thousands of people were held in Caracas. The mobilizations, which included delegations and high-profile politicians from throughout the country, took off from different points before converging on Miraflores Presidential Palace in the afternoon.

“On April 13 (2002), the Venezuelan people taught a lesson to the oligarchy and the empire,” President Nicolás Maduro said in his speech.

The Venezuelan leader paid tribute to those killed fighting against the short-lived coup government and hailed the events of twenty years ago as “a victory of the Bolivarian civilian-military union.”

The Bolivarian Militia had a strong presence in the rally, with several thousand members in uniform and in formation, many of them carrying weapons.

The organization was created by Chávez in 2005 and incorporated into the armed forces three years later. With a reported membership of over three million, the Bolivarian Militia is conceived as a territorial self-defense unit.

Leonardo Rodríguez, grassroots activist and professor, told Venezuelanalysis that the April 2002 events were “a turning point in Venezuelan history.”

“Without firing a single shot, the Venezuelan people and the armed forces restored constitutional order and kicked out the usurpers,” he explained. Rodríguez stated that the main lesson from 20 years ago was the need to “trust the people.”

For her part, Carmen García, a local leader of the ruling Socialist Party (PSUV) in the San Agustín barrio, stressed that the march was a great show of support for the Maduro government in the face of foreign threats.

“April 13, 2002, left us a legacy of unity that we rescue in order to continue fighting in defense of the Bolivarian Revolution,” she told Venezuelanalysis.

The 20-year anniversary commemorations also saw the Venezuelan government host an “International Summit Against Fascism” from April 11 to 13.

Featuring over 200 participants from 52 countries, the event had panels and presentations on the rise of far-right and fascist movements around the world, as well as the need to grow solidarity movements.

The summit likewise focused on the importance of alternative media to break the hegemony of corporate outlets and censorship efforts from social media platforms.