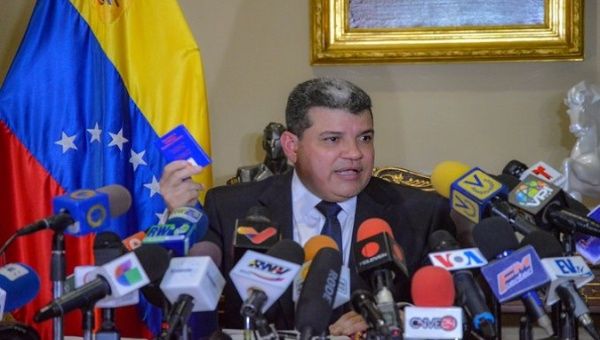 Venezuelan Assembly to Investigate US Funding to Guaido

Above Photo: Luis Parra said a request will be send to the United States asking to investigate about the resources given by USAID | Photo: @LuisEParra78

The president of the National Assembly, Luis Parra, announced the creation of a commission to investigate the financing of USAID to the right-wing opposition sectors led by Juan Guaido.

The president of the National Assembly (NA), Luis Parra, announced this Monday that the Parliament will name a special commission that will be in charge of investigating the use of the alleged humanitarian aid funds sent to sectors of the extreme right of Venezuela, by the United States Agency for International Development (USAID).

He also indicated that a request will be sent to the United States asking that country’s authorithies to investigate the resources given by USAID because “we don’t know where that money went.”

“We are saying that those scandals that have been widespread like the Cucutazo and the improper management of those resources should be investigated.

We are asking for the truth to be revealed to the country, in a matter that has been linked to the media and NGOs,” he said.

He insisted that Parliament, as an autonomous power, will continue an investigation to determine the destination of the resources.

“We are going to keep insisting on a transparent management,” he said.

Earlier in the day, Parra stated through Twitter that USAID has provided 467 million dollars since 2017.

Of that amount, Congressman Juan Guaidó has received $180 million since January 2019, as reported by the Venezuelan news agency AVN on its website.

The self-proclaimed ‘president’ of Venezuela, Juan Guaido, seems to be having a hard time staying in the spotlight.

He now plans to create a “presidential commission” to restructure teleSUR in order to serve his interests and to provide a channel that helps him stay relevant.

Since he lacks the popular support needed to become the leader of Venezuela, Guaido continues to seek alternative methods to harm the Bolivarian Republic.