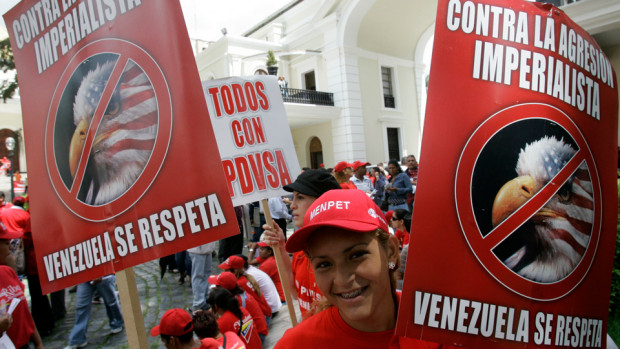 Venezuelan Left Fights Back Against Trump’s Threats And Sanctions

Above Photo: A Venezuelan protester holds a poster that reads in Spanish “Against Imperialist aggression, respect Venezuela” during a protest outside the National Assembly in Caracas Venezuela. Howard Yanes | AP

On Friday, August 25, President Trump announced the imposition of tough new sanctions on the Bolivarian Republic of Venezuela, as punishment for the establishment of a new National Constituent Assembly in that country. But the Constituent Assembly is not taking Trump’s latest attacks lying down, but rather is forging ahead with a full program of reforms on the heels of military threats against the South American country.

Threats against Venezuela by the United States are not new. President Obama had already declared Venezuela to be an unusual threat to U.S. security and interests, using language required to make the imposition of sanctions legal. However, the composition and politics of the Trump administration have greatly increased the anti-Venezuela mood in our executive branch. The high concentration in the U.S. political establishment, in the Trump cabinet and among Trump’s closest advisors and personal cronies — of people with axes to grind against Venezuela — has increased the danger.

For example, Secretary of State Rex Tillerson used to be the CEO of Exxon-Mobil, a transnational oil giant which has had sharp disputes with the Venezuelan government over the nationalization of some of their properties in that country. General John F. Kelly, now White House Chief of Staff, was the head of the U.S. military’s Southern Command from 2012 to 2016, a brief that covered all of Latin America and was supposed to guard against “threats” to the United States emanating from that region. The Trump administration is also closely allied in Congress and out of it with far right wing figures such as Senator Marco Rubio (R-Fla.) who have organized a vicious campaign of regime change against Venezuela, very similar to the campaign that the United States mounted against socialist Cuba from the 1959 revolution on. In the case of Rubio, the tactics used against Venezuela have included threatening some of Venezuela’s poor Caribbean neighbors, such as Haiti, with cutoffs of U.S. aid if they don’t toe the U.S. line on Venezuela.

There had been sanctions imposed against Venezuela before, but up to now they had been focused on specific individuals in the Venezuelan government such as President Nicolas Maduro, and so have had very limited impact. But the new sanctions, explicitly imposed as punishment for the election of the National Constituent Assembly permitted by the Venezuelan constitution of 1999, are much more serious. They are designed to prevent the Venezuelan government or the Venezuelan state petroleum company, PDVSA, from raising funds by new issues of sovereign bonds. Venezuela is in a very difficult situation right now, and has been forced to pay high interest on loans it gets from overseas; the sanctions are designed to make this nearly impossible and thus choke the Venezuelan economy. As U.S. analyst Mark Weisbrot points out, the pain is to be inflicted on the most vulnerable sectors of the Venezuelan population. This, too, is parallel to the strategy used to try to crush socialist Cuba—make the people suffer so that they will rebel and overthrow the government the U.S. doesn’t like.

Two curious exceptions to the sanctions

There are two curious exceptions to the sanctions. One is that there is no move to shut down the many CITGO gas stations in the United States, although CITGO is owned by the Venezuelan national petroleum company. However, CITGO will not be allowed to repatriate any of its earnings to Venezuela from now on.

Another exception is Goldman Sachs, one of the world’s largest finance capital operations. Some in the Trump administration and in the right wing Venezuelan operation had wanted Goldman Sachs to be forbidden from dealing with Venezuela on sovereign bond issues; however for now this is to be permitted for this specific company. The mystery is cleared up when one remembers the oversize representation of Goldman Sachs people in the Trump administration, starting with Treasury Secretary Steve Mnuchin.

Meanwhile, in Caracas, the Venezuelan capital, the elected members of the Constituent Assembly have plunged into a vigorous work schedule. And near the top of their agenda is shaping responses to the new threats from the Trump administration, while looking at many kinds of reforms that have been demanded by grassroots groups in Venezuela for years.

The second largest political party in the ruling coalition is the PCV, the Communist Party of Venezuela. The PCV has been staunchly supportive of the Maduro government, but also has been critical of specific policies, especially in the economic field. The PCV strongly supports the National Constituent Assembly, wherein it has a presence, and before the Assembly elections had proposed a series of reform measures, which it is now pushing for in the Assembly and in the nation.

The PCV points out the key economic problem that Venezuela has faced, starting with the beginning of its oil boom in the 1920s. It is excessively dependent on selling crude oil in international markets, and on importing all kinds of essential goods, including food and medicine, many of which Venezuela could produce domestically. Also, although the enemies of the Venezuelan government blame the current crisis of unsustainable inflation, scarcities and resulting social and political instability on “failed socialism,” in fact Venezuela is not and has never been a socialist state. Although Maduro’s predecessor as president, Hugo Chavez, brought the nationalized oil industry under stronger government control, and greatly improved the living standards of the Venezuelan people, especially the poor, by using oil profits to fund projects of housing, health care, education and other things, much of the economy remains under the control of large private corporations which are linked to the right-wing political groups which are trying to overthrow the government. This is especially true in the realm of distribution of imported food and medicine, and in the private banking sector. Speculation and hoarding as well as outright illegal business practices are rife, and some may be deliberately designed to undermine the government.

Also, perversely, the improvement of the living standards of the Venezuelan people under the Bolivarian government has worsened the problem of overdependence on imports, for the simple reason that people now have more money to buy imported goods than they did before.

A particularly dangerous part of the current dilemma is that Venezuela’s foreign exchange reserves have been dropping sharply. The Maduro government is unwilling to go to the extreme of saving money by reversing the social improvements undertaken by Chavez, thereby instituting a neo-liberal regime in which the country’s problems would be resolved on the backs of workers, small farmers and the poor. So it has been trying to keep its head above water by going to international lending sources for more aid, which, given the situation, can only be obtained on worse and worse terms, at higher and higher interest rates, or by mortgaging state assets to raise money to pay the nation’s bills.

The Trump administration and the Venezuelan right see this as a trap to be sprung shut on Venezuela. Deny Venezuela the ability to float sovereign bond issues, they think, and the government will be forced to cut the social welfare budget, which will in turn create more dissatisfaction within the Bolivarian support base.

Hence the new U.S. sanctions, plus open calls among some sectors of the Venezuelan right for U.S. intervention to overthrow the Maduro government.

The PCV is prioritizing accomplishing reforms

For some time, the PCV and others have been calling for corrections in these negative dynamics — corrections that by their very nature require a “move to the left.” They now see this as an emergency situation requiring urgent action.

The PCV is prioritizing accomplishing these reforms. One is to nationalize the private banking system, so that the wealthy enemies of the government no longer control the delivery of dollars to the big corporations in Venezuela such as those who distribute food. Another is to straighten out the crazy quilt of foreign exchange rates, which encourage speculation, smuggling and the black market. Yet another is to end agreements with the United States whereby U.S. corporations pay taxes on their Venezuela-generated profits only in the United States, not in Venezuela. Yet another drastic measure would be a moratorium on payments on the foreign debt.

The PCV is not alone in calling for a higher prioritization of the diversification of the productive dimension of the economy, so that Venezuela will no longer be dependent on the oil exports and thus at the mercy of changes in prices on the international markets. Diversifying the economy can also reduce the dependence of the country on foreign imports, which also would undermine the machinations both of the Venezuelan right and of imperialism. For example, there is no reason for Venezuela to be importing a huge proportion of its food, when it has a climate, soil and human resources that could break this dependency.

The PCV calls for the wings of the food importing monopolies to be radically clipped, to the extent of the government taking over food distribution and thus putting an end to hoarding, illegal black market transactions and cross border smuggling of foodstuffs.

All of this should be accompanied by a much greater role for the grassroots in running the economy and the state, as a means of combating bureaucracy and governmental corruption.

How can Venezuela finance these necessary reforms without cutting back on the social safety net that protects workers, small farmers and the poor? The PCV will be pushing for major tax reforms.  It criticizes the current tax regime as excessively regressive and getting more so, with investment profits undertaxed and already excessive sales taxes imposed on consumers increasing. This must be reversed.

Though the PCV is committed to working with and through the National Constituent Assembly, it does not see the body as being wholly left-wing in orientation. Nor is it identical with the national mobilization of the Venezuelan people that will be essential to accomplish these things and stave off either collapse or an armed U.S. intervention. So it calls for a continued mobilization of the whole of the people to make sure the potential of the Constituent Assembly to create economic, political and social reforms is fully realized.