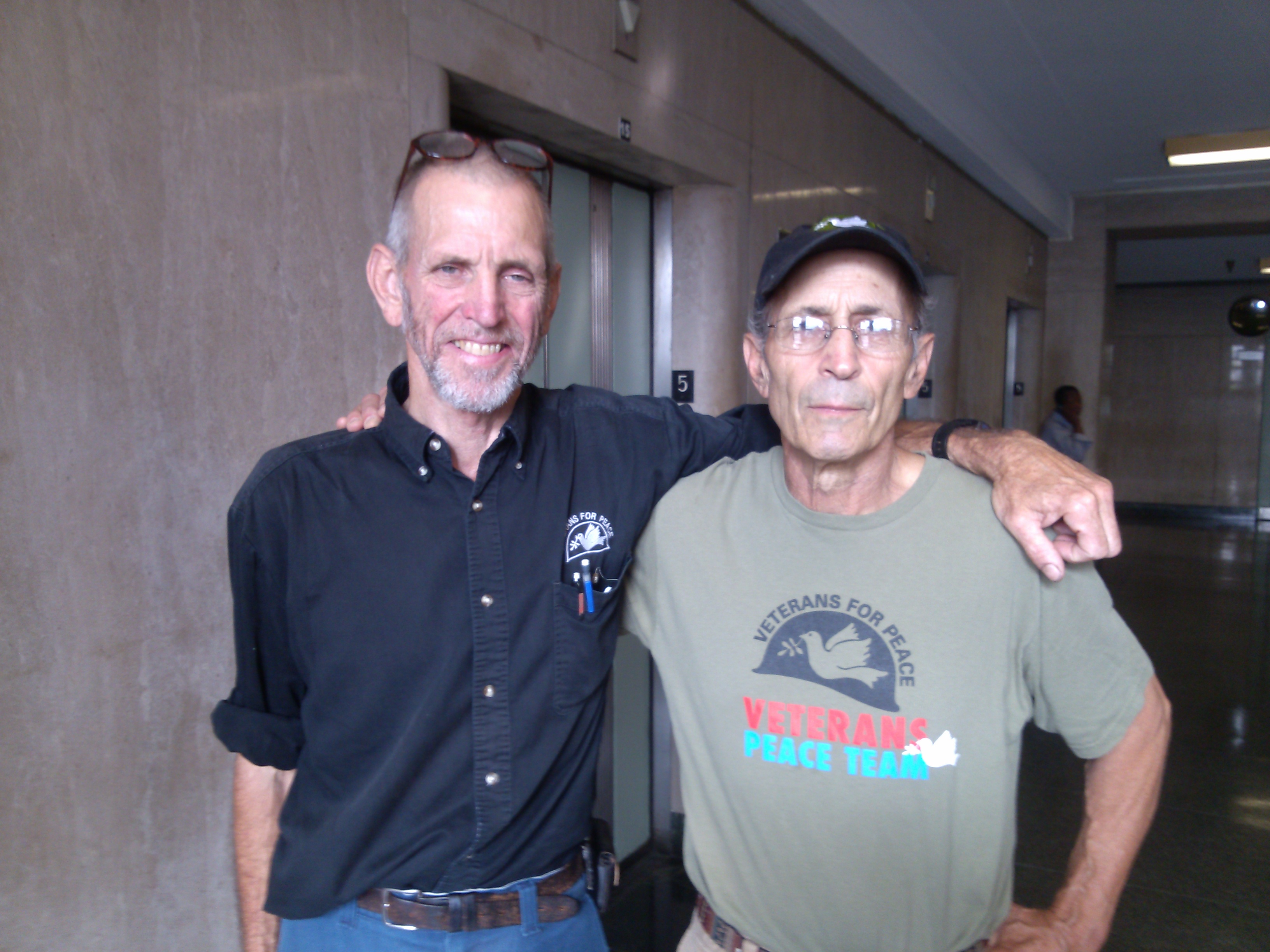 Veteran on Hunger Strike to Inspire More to Take Action

Above photo of Elliott Adams (on left) and Tarak Kauff by Ellen Davidson.

July 11th. Finishing my 34th day of hunger strike while on trial for the past four days in NYC over exercising our right to assemble peacefully in a public place – notably the Vietnam Veterans Memorial in NYC. There were 14 defendants (mostly veterans) (now 12) and we will probably get the judges verdict tomorrow. Elliott Adams, on day 55 now of his hunger strike was one of the original arrestees but took an ACD because he couldn’t show up on Monday for the trial start due to having a medical appointment. He traveled all the way from Sharon Springs, upstate NY, Tuesday morning just to show support and solidarity which was much appreciated! Here we are in the hall outside the courtroom looking a bit leaner than usual.

As of this past Friday (almost a week ago) I was down 21 pounds from my normal weight of 160, and think I’ve lost at least another few pounds since then but have no scale here in the city. I am feeling just a tad bit more fatigued, mainly when climbing stairs, like at my partner Ellen’s place, which is 3 floors up. General energy and strength are still good although it is tiring sitting in the courtroom all day listening to lawyers. Here’s a link that will give you a complete history of the arrests and update on the trial. http://www.stopthesewars.org/

Articles came out in the NY Post,  Daily News  and a very good story on the Daily Kos as well as on numerous blogosphere sites.

The judge dismissed the cases of two solid defendants, Mike Tork and Steve Chrismer yesterday, much to their dismay, on the grounds that the police did not properly identify them. They were quite disappointed as both wanted to testify and continue to stick with the group in solidarity.

The hunger strike and my purpose in doing it will continue, at least until (for me) I see general activism around Guantanamo growing considerably, especially among Veterans For Peace. My purpose is not with the expectation to pressure Obama into stopping the force feeding or to close Guantanamo. Although he has the power to do both of those things, it will only happen when he is absolutely politically forced to do it by more activism than just a few people’s hunger strike.

It will take the so-called “choir,” and that’s all of us, to be more intensely willing to risk comfort and security, to involve ourselves en masse in a stand-up, nonviolent direct action, to make the sacrifices necessary to bring about a change. I am hoping, as Brian Willson, Elliott Adams and Diane Wilson have inspired me, my addition to the roll call of hunger strikers will be an inspiration to motivate and energize others.

We, human beings of conscience, need to step up resistance to an increasingly exposed and evident totalitarian state, not only on this front but on all fronts. The surveillance, torture, repression, wars and exploitation of the natural world and its residents will continue and only get worse unless we who are awake, stand up and step up. It’s all connected.