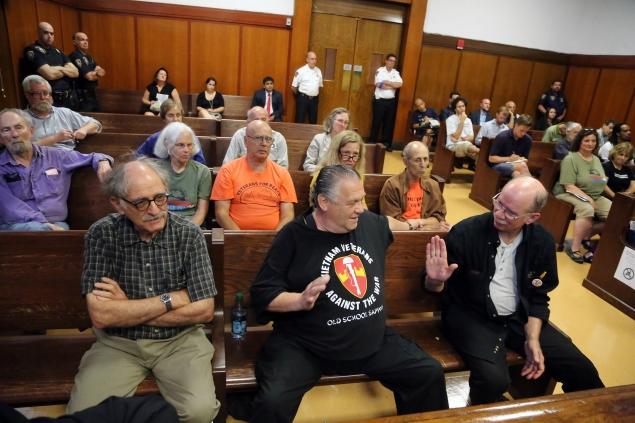 Judge Robert Mandelbaum covered all his bases with his verdict July 12 in the case of 12veterans and their allies arrested last Oct. 7 at New York City’s Vietnam Veterans Memorial Plaza. Rejecting the First Amendment arguments put forward by the defense, he found the defendants guilty of trespassing because they stayed in a city park after its 10 pm closing time. But he then ruled in favor of a motion for “dismissal in the interests of justice” put forward by defense attorney Martin Stolar, thus averting the bad press that might have been generated had he chosen to send a bunch of military veterans to jail after they were arrested in the act of reading the names of the war dead and laying flowers at a veterans memorial. “Justice would  have been better served if the judge had had the courage to stand up for our First Amendment right to assemble,” said Tarak Kauff, the lead organizer of the Oct. 7 ceremony marking the 11th anniversary of the U.S. invasion and occupation of Afghanistan, “but we don’t depend on this system for justice. We have to create our own justice. This was never the end point; this is a process.”

[Oct. 7 defendants outside the courthouse after their charges were dismissed July 12. Photo by ELLEN DAVIDSON]

The final day of the trial started with a lengthy closing statement by defense attorney Martin Stolar of the National Lawyers Guild. “Something smells bad in this case,” he began, noting the incongruity of arresting veterans in the process of honoring their fallen brethren at a memorial for those same dead soldiers. Citing the words on the glass wall that constitutes the centerpiece of the memorial— “And in that time when men decide and feel safe to call the war insane, take one moment to embrace those gentle heroes you left behind…”—Stolar pointed out that the park was intended for exactly the kind of remembrance that the veterans and their allies were conducting Oct. 7.

Building on the previous day’s closing by the NLG’s Jonathan Wallace, he went on to lay out in detail the First Amendment rationale for finding the 12 defendants innocent. Current judicial practice allows for limited “time, place, and manner” restrictions on First Amendment rights as long as they are narrowly tailored to serve some significant government interest. The only government interests in closing the park at 10 pm presented by the prosecution were cleaning and maintenance, reducing wear and tear on the park, and preventing crime. Stolar noted that the cleaning and maintenance was carried out during the day, that the facility was mostly concrete and not subject to same wear and tear as parks filled with grassy lawns and plantings, and that the open plaza was designed to be easily policed since the entire area is visible from patrol cars passing by on bordering Water and South Streets. He also stressed that crime concerns in an open plaza like this one were no different from those on city streets and sidewalks, which are not closed after 10 pm.

In his closing, Stolar also re-offered a previous motion for dismissal in the interests of justice that had been rejected by a different judge before the trial had begun. He noted that Judge Mandelbaum could reconsider the motion in light of information brought out in the trial and could grant it at any time.

Stolar’s statement was followed by a prosecution rebuttal in which Assistant District Attorney Marisa Darden conceded that, as the defense case had demonstrated, the park is frequently used after 10 pm by individuals crossing between South and Water Streets, dog walkers, tourists and others in groups of three or four who sometimes sat for long periods on the benches and no attempt is made to remove them from the plaza. Park use during those hours by larger groups, however, presents a danger of disorderly behavior and rioting, according to Marden.

This goes to the heart of what the veterans and their allies were addressing when they made their stand at the memorial plaza Oct. 7. First Amendment rights to assembly and free speech in public spaces are being increasingly restricted, and this process has accelerated with the massive police repression brought down on participants of Occupy Wall Street. As Stolar pointed out in his closing, the only arrests ever made at the memorial for violating the park closing time were Oct. 7 and May 1, 2012, following a general assembly of the Occupy movement at the end of a large May Day march. Earlier in the trial, Wallace noted that it seemed that you could do anything you wanted in the park after 10 pm except First Amendment-protected speech.

Judge Mandelbaum accepted the prosecution’s reasoning in his verdict, saying that because the defense could not show an instance of a large group using the park after 10 pm that was not subjected to eviction or arrest by the police, the two instances in which the park curfew was enforced could not be shown to constitute a shutting down of First Amendment activities. In other words, unless it could be proven that large gatherings of other types—say, church groups—were allowed to use the plaza after 10 pm without police interference, the enforcement of the curfew only in two instances could not be considered selectively aimed at First Amendment-protected conduct.

Many of the defendants were unwilling to do community service or pay a fine that would acknowledge any guilt on their part, preferring to serve time in jail if necessary. Sidestepping the dilemma of possibly having to sentence veterans to jail time for a ceremony honoring their fallen comrades Judge Mandelbaum followed his guilty verdict by granting Stolar’s motion for dismissal in the interests of justice. While stressing that he in no way accepted the defendants’ interpretation of their First Amendment rights, he noted that most were veterans who had served their country, that they had been orderly and respectful, and that they ranged in age from 50 to 86. Justice would not be served, he said, by creating a criminal record for this aging group. He also warned that should they or a similar group return to the memorial and violate the closing time in the future, he would not be inclined to grant such mercy a second time.

“It’s still a slap in the face. The judge did nothing to take that away,” said Vietnam veteran Mike Tork, referring to being arrested at the memorial Oct. 7. Charges against Tork and Steve Chrismer were dismissed July 10 because their arresting officer failed to identify them or even mention their names in his testimony.

Said World War II veteran Jay Wenk, “I’m disappointed. The judge made a decision that protected himself. He came to a verdict that would please the prosecution enough so that they’re not going to try to overturn his decision. He would not consider the First Amendment at all. Marty Stolar made such a spellbinding and riveting and detailed summary of the case, what we were doing, and why, and why the court should acquit on a very narrow basis, but the judge was protecting his ass.”

Defendant Joel Kovel, who served as a psychiatrist in the army during the Vietnam War, commented, “I think that the judge was being very careful and cautious in trying to please everyone, and in doing so he only pleased those who want to compromise with the truth. What he did at first was dismiss our claims that the monument had been arbitrarily closed by just repeating statements made by the prosecution lawyers, and that way he avoided any kind of ruling that would foreground the paramount issue of First Amendment rights, which is what we were there about.”

“Having established those grounds,” Kovel continued, “he had no hesitation in pronouncing us guilty of violating the curfew established by the lawful authorities. Then, having defeated our basic purpose, he turned generous and told us that we were wonderful people and deserved praise for our sincerity and our fidelity to the cause of Veterans For Peace. This enabled him to then dismiss the charges against us after having evaded the basic issues of the trial. I am confident that the Veterans For Peace who were there will continue the struggle and will not let the matter rest at this level.”

The defendants in this case, their lawyers, and others who were forced to leave the park May1 and Oct. 7 to avoid arrest are considering a federal civil suit challenging the park closing time and its use to shut down assembly and protected speech in a public space.

“The judge basically took the coward’s way out on two counts—by failing to uphold our First Amendment rights and then dismissing the charges because it would have looked bad to jail veterans for honoring those killed in war at a veterans memorial,” said Dr. Margaret Flowers, one of the defendants. “More and more decisions and policies that deeply affect our lives and our planet are being made behind closed doors, while our rights to protest them are disappearing. It’s important that we take a stand now to preserve our right to dissent.”