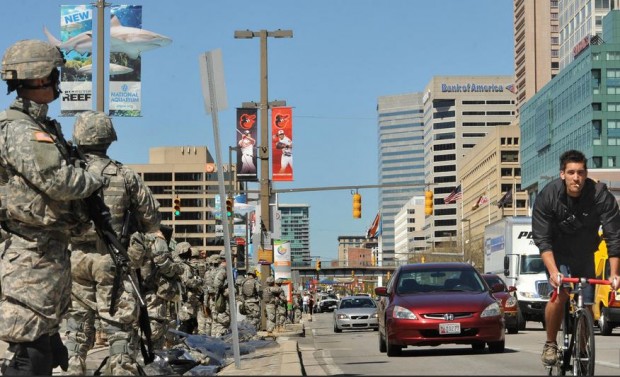 Veterans Call On National Guard To Withdraw From Baltimore

Note: Having the National Guard in Baltimore is producing tension. It is time for the mayor to end the curfew and state of emergency; send home the National Guard and out-of-town police and hold the police who killed Freddie Gray accountable.

If the city wants peace they need to provide justice. Right now the city is looking like it is unable to handle this injustice. The six police involved in the killing, all are accomplices, should be in jail and held without bond pending a trial. Any other gang of six who killed someone would be in jail, the police should be treated no differently. We agree with Iraq Vets Against the War and Veterans for Peace in their call for the National Guard to stand down in Baltimore. The military should not be police.

MARYLAND – Iraq Veterans Against the War (IVAW), a national group of Post 9/11 veterans, call on the Maryland National Guard to stand down from their mobilization to Baltimore. As 1,000 soldiers currently deploy to put down an uprising of exploited people who have been terrorized by a consistently racist police department, we stand in solidarity with the people of Baltimore and encourage service members and veterans to listen to their fellow community members and to stand on the right side of history.

We know that the death of yet another black person at the hands of police is not unique or new in our country. We also know that the rage we are seeing in the streets is the direct result of a legacy of police departments and a prison system that dehumanizes and targets black people and people of color and the result of a morally bankrupt economy that continues to profit off of the backs of poor people across the country. We stand with those people who have lifted up the banner of #BlackLivesMatter to ensure that fundamental change takes place in our country.

The irony of the National Guard deployment to quell protests due to the death of Freddie Gray at the hands of police is not lost on us as we approach the 45th anniversary of both the Jackson State and Kent State shootings, where the National Guard and police were deployed to silence protestors with deadly consequences.

As veterans who have deployed to and served in support of occupations abroad, we see some of the same tactics and military equipment being used by police against the people of Baltimore, just as it was used against the people of Ferguson and Oakland. The increased militarization of our foreign policy and our domestic policing, coupled with racist violence perpetuated by our government, has to stop. The people of Baltimore demanding systemic change should be responded to with dialogue not an escalation of force. We encourage National Guard members across the country, many of whom we have served with, to begin a conversation on how they will respond when it becomes their turn to be mobilized against their own communities.

– Iraq Veterans Against the War

St. Louis, MO – Veterans For Peace would like to extend our condolences to the family of Freddie Gray, the 25-year-old Black man who died in police custody from a fatal spinal cord injury. The loss of a child under any circumstance is tragic. However, losing a child to violence adds a deeper pain.

Veterans For Peace stands with the family and the people of Baltimore in their call for peace and non -violent change. As veterans who know war and the horror it brings, we know that violence only serves to cause more violence. Those who are most vulnerable are caught in the crossfire of violence, disrupting lives and destroying families. Violence is like a virus that escalates and spreads. It can easily spiral out of control into a dark morass of death. Knowing this, because we have participated in it, we call on all parties to take a step back and search for non-violent means to address the tensions in Baltimore and around the nation.

Veterans For Peace calls for the immediate withdrawal of the Maryland National Guard. We are appalled to see military weapons, vehicles and equipment once again deployed in U.S. cities to control U.S. citizens who are in fact reacting to a long history of state sanctioned violence and appalling economic and social conditions. Conditions that give them little hope of providing for themselves and their families. We are highly concerned as we approach the 45th anniversary of Kent State this May 4th and Jackson State this May 15th, that we will see another example of nervous and fearful National Guard troops shoot and possibly kill people in the streets of this nation.

With our call for peace and as an organization waging peace, we must also seek justice. Those most responsible for the rebellions in Baltimore and Ferguson are not the disenfranchised and the victims of police violence. Those most responsible are the economic and political leaders who do not address the chronic economic and social instability of neighborhoods like that of Freddie Gray’s. One only has to drive through Baltimore neighborhoods like his to see and understand the frustration of residents. But the numbers also speak for themselves; unemployment 16-64 years old – 51.8%, population 25 and older with less than a high school diploma – 60.7%, vacant or abandon building – 33.1% and 9th-12th graders chronically absent from school – 49.3%.

Under these conditions there are few possibilities other than street violence and confrontations with police. The truth is that police are like soldiers, working class people who are manipulated and used by the same economic and political interests who gain the most from the neglect of these neighborhoods. Mirroring working class soldiers who are sent to foreign lands to impose U.S. ruling class interests on the poor of the world, the police are sent to control poor populations ere at home who have legitimate complaints and grievances, but have been ignored for decades. In both cases, the police and soldiers’ sense of wanting to do the right thing and serve people and country are exploited for greed and profit. Two time Medal of Honor winner and highly respected Marine Corps General Smedley Butler said it best, “I served in all commissioned ranks from a second Lieutenant to a Major General. And during that time, I spent most of my time being a high-class muscle man for Big Business, for Wall Street, and for the bankers. In short, I was a racketeer for capitalism.” In cases like Ferguson and Baltimore, the police are tools for the same interests.

President Obama and many others have called for the end to violence in response to police brutality. We agree, but we must also remind the President and others that today just as in 1968 as tated by Dr. King, “I could never again raise my voice against the violence of the oppressed in the ghettos without having first spoken clearly to the greatest purveyor of violence in the world today: my own government. For the sake of those boys, for the sake of this government, for the sake of the hundreds of thousands trembling under our violence, I cannot be silent.” Veterans For Peace can cannot be silent.

We call on our nation to hold police accountable for lawless violence against communities, and we call on the rich and powerful to end global wars, to end their indifference and pursuit of profit over humanity and to use the trillions devoted to Pentagon war spending to invest in human needs around the world.

The quickest path to end violence is to provide a path to a bright future. Education, jobs and opportunity will lead to stable families and prosperity. If we continue to ignore the cries of the global poor and disenfranchised, we will continue to see violent reaction and the spread of organizations like ISIL. People rise up because they must, not because they want to. They have no choice. They will use whatever means is at their disposal.

Veterans For Peace will continue to use nonviolent means, including direct action and civil disobedience to push for the change we seek. We call on all peacemakers and justice seekers to join together to bring into fruition a system that places humanity and human needs over profit. That is what we need and what we must build if we want to end the violence sweeping the world.