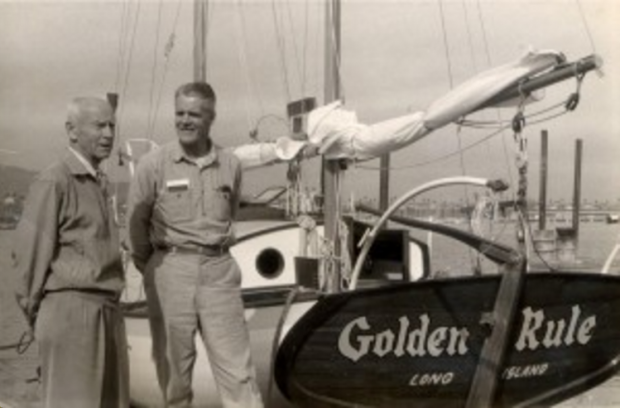 We aim to advance Veterans For Peace opposition to nuclear weapons and war, and to do so in a dramatic fashion.

We have recovered and restored the original peace ship, the Golden Rule, that set sail in 1958 to stop nuclear testing in the atmosphere, and which inspired the many peace makers and peace ships that followed.

The reborn Golden Rule will voyage once more, to show that nuclear abolition is possible, and that bravery and tenacity can overcome militarism.

The historic Golden Rule antinuclear sailboat, now a national project of Veterans For Peace, is being readied for another epic voyage.  From early June through September, she will be plying the waterways of the Great Northwest, making stops in over 30 ports as she continues her mission to sail for a nuclear free world and a peaceful, sustainable future.

The Golden Rule is currently docked in the Eureka marina in Humboldt Bay on the northern California coast, where reconstruction team volunteers are busy at work with routine repairs, upgrades and redesigns.

Humboldt Bay VFP Chapter 56 recently donated over $3,000 to purchase a 6-person inflatable lifeboat for the Golden Rule.  Greater Seattle VFP Chapter 92 recently donated $500, and is planning to donate more in the future.  San Diego VFP Chapter 93 continues with its monthly sustainer of $100.  The Ground Zero Center for Nonviolent Action, located next to the Bangor Trident Submarine Base on the Hood Canal near Poulsbo, 25 miles west of Seattle, has donated $1,000 for the Golden Rule’s visit to the Puget Sound.

“There is lots of excitement and many people are stepping up to help make the Golden Rule voyage a success,” said Helen Jaccard, Golden Rule Project Coordinator.

Physicians for Social Responsibility is assisting with organizing in both Washington and Oregon.  Portland VFP Chapter 72 is helping to plan for the Golden Rule’s presence at the Fleet Week Parade of Ships,June 8, and the Parade of Roses,June 11.  Seattle VFP is helping with plans for Fleet Week and the Parade of Ships in Elliott Bay,August 3, and for the Golden Rule crew to participate in Hiroshima Day activities at Green Lake onSaturday, August 6.  Ground Zero and friends are planning a Nagasaki Day protest flotilla near the Bangor Trident Submarine Base onTuesday, August 9.

“This voyage is very timely,” said Helen Jaccard. “We want to focus people’s attention on the Obama administration’s announcement that One Trillion Dollars will be spent over the next 30 years to‘modernize’ the U.S. nuclear weapons arsenal.  This is unacceptable, and a total violation of both the spirit and the letter of the Nuclear Nonproliferation Treaty.”

The Golden Rule will be seen by thousands of people at wooden boat festivals in Seattle (July 2-4), Vancouver, British Columbia (Aug. 25-28), Victoria, BC (Sept. 2-4) and Port Townsend Washington’s Olympic Peninsula (Sept. 9-11).  Her rust colored sails emblazoned with a peace sign (the original symbol of the Campaign for Nuclear Disarmament) and the logo of Veterans For Peace will attract many visitors to the Golden Rule, who will learn about her amazing history, her courageous crews, and her ongoing mission.

The Golden Rule and her crew will also spread the word about the continuing dangers of nuclear power, and the poisoning of the air, water and soil from the entire nuclear cycle, from uranium mining to the disposal of nuclear waste.

“We will give a platform to local activists who are concerned about threats to the environment from proposed coal and natural liquid gas ports throughout the Northwest,” said Helen Jaccard. “Veterans For Peace is also very concerned about the militarization of Washington state, where the Navy is conducting widespread electronic war games on the Olympic Peninsula and even invading Seattle city parks.”

The VFP Golden Rule Project is accepting applications for captains and crew.  The Crew Selection Committee will begin putting together the crewing schedule in early April.  If you are interested in participating in this amazing four-month voyage throughout the Northwest, whether for a week or a month, please let us know by the end of March.  Experience is preferred, but intrepid novices may also apply athttp://www.vfpgoldenruleproject.org/crew-application/