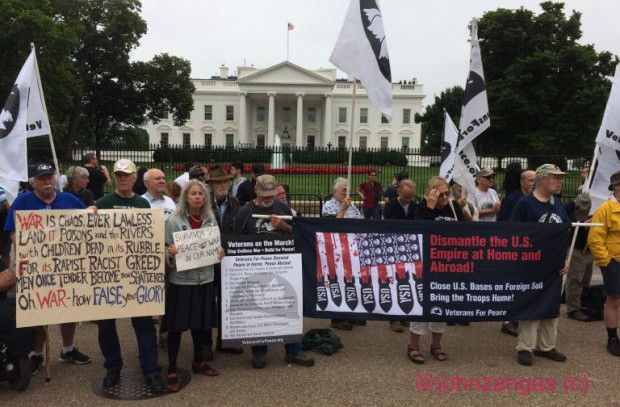 Above Photo: Veterans spoke of a need to end decades long wars in the Middle East. Photo: John Zangas

Veterans rallied this weekend at the Lincoln Memorial calling for a new global peace initiative. Veterans For Peace (VFP), CODEPINK Women For Peace, and Iraq Veterans For Peace, were among a dozen anti-war groups calling on the Trump Administration to invest funding in diplomacy and peace instead of increasing the military budget by $54 billion dollars.

Veteran speakers urged the Trump Administration to begin closing U.S. bases on foreign soil, to redirect a portion of the military budget to education, healthcare and infrastructure, and to ban nuclear weapons.

Veterans spoke at the Lincoln Memorial of the impact of wars while nearby organizers set up a Swords to Plowshares bell tower for the public to leave messages.

The three day rally was joined by hundreds of combat Veterans and followed by a peace walk on Tuesday past the MLK Memorial to the White House. They paused to read a Martin Luther King Jr., speech from 1967 about ending the Vietnam war, before proceeding to the White House.

The rally was organized amidst growing global tensions as drumbeats of conflict reverberate across the Middle East and in Asia, Eastern Europe and Africa.

The Veterans want world leaders to seek peaceful alternatives to conflict and come at a time of great peril and high stakes as world powers opt for military solutions in several major arenas. In the Middle East conflicts in Syria, Iraq, Yemen, Afghanistan, and Palestine have threatened to spill into a broad regional conflict. Middle East conflicts have already killed millions, and have cost the US trillions in expedatures on wars over the last two decades. Meanwhile shores around the South China Sea threaten to boil over with war at any time as the U.S. and South Korea continue on a collision course with North Korea. The Koreas are moving towards what Defense Secretary James Mattis has said would result a “catastrophic” conflict. Likewise in East Europe, Russia continues to occupy its Eastern Ukraine after its 2014 invasion, while NATO continues a troop buildup there. And in Africa multiple conflicts continue to fan waves of thousands of refugees willing to risk a dangerous voyage over the Mediterranean Sea to Europe, taxing EU social services.

At the core of these issues is an increase in US budget expenditures, now over $600 billion annually, on war machinations, and its involvement in world conflicts and undeclared wars, said several prominent Veterans during the rally. They linked the growing U.S. war machine as a leading contributor to conflict and global tensions.

In each case Veterans spoke as both experienced combat warriors and witnesses to previous US conflicts, from the Vietnam era, to the ongoing wars in Iraq and Afghanistan.

Among them was Mary Ann Wright, a retired US Army Colonel, who served 26 in the Army and is now a peace activist with CODEPINK Women for Peace. “As Veterans we want the wars of America to stop and we want peace around the world and if America would stop its war mongering we would probably have a really good chance at peace,” she said.

Michael Marceau, President of DC Chapter of Veterans for Peace. An Army Veteran and survivor of the Vietnam War who fought in 1969-70, is a Purple Heart recipient for wounds he received there. He said that deplomacy is the first line of defense but recent administration cuts of 30% to the State Department while increasing the Pentagon budget by $54 billion is a mistake. “We shouldn’t be sending the military in as a first response, we need to talk to people and find common ground and we cannot do that if money from the State Department is being sent to the Department of Defense,” said Marceau.

“Over 90% of the victims of war are civilians,” related Marceau. He also said that many civilians of the Iraq war have become refugees, overwhelming social programs throught Europe.

Matthew Hoh, a Marine Veteran of both the Iraq and Afghanistan wars, said that the costs of US wars in seven counties now being fought are far more than most Americans realize. “Tens of thousands of Americans have been wounded and killed, hundreds of thousands of Veterans are suffering psychologically, and millions of foreign nationals have died and as Veterans we’re saying this cannot go on,” said Hoh.

Hoh also spoke about the blowback from military drones by creating more enemies abroad, but also has associated effects on drone operators related to PTSD and an increase in suicides. “Drone strikes are tearing apart families here with the PTSD epidemic but more viscerally the drone strikes are killing and wounding thousands of people overseas,” said Hoh.

Michael McPherson, Executive Director of Veterans For Peace, who served in the Gulf War (1991), said he was concerned about the increase in the defense budget. “We’ve had this immortal budget that is spending way too much on war and what we need is a new foreign policy so we don’t spend all this money on war but for people,” said McPherson.

Ray McGovern, a former CIA analyst from 1963 to 1990, spoke about the difference between patriotism and faux patriotism. “Patriotism is looking at what your government is doing and making sure it’s on the up and up and to the degree you’re able, to speak to others about it,” he said. He criticized those who are sending others to war and congratulating them when they get back as engaging “faux patriotism”.
McGovern was critical of Administration policies to build up US military strength around the globe without Congressional authority. “The question is whether these wars are worth sending others off to and the answer to that is absolutely not, and especially not without appropriate Congressional authoritization,” he said.

McGovern said that the present handling of military affairs goes against what the constitution intended. “So you get this faux patriotism and homeshare warriors here, most of which have never served, and most of them have no idea what war is like,” he said.