Veterans: U.S. Attack on Syria Could Lead to Nuclear War 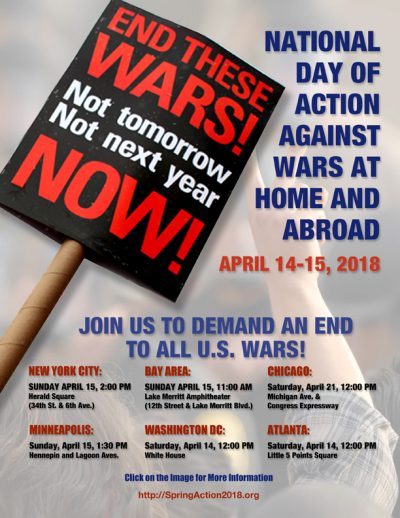 Say No To War Against Syria

Note: April 14-15 are national days of action against war. With the war drums beating for an attack on Syria people need to participate in these protests and call for NO WAR ON SYRIA. There are signs that the calls for war are showing cracks. There are many raising questions about the allegations of a chemical attack by Syria who are describing this as a false claim to pull the US into war. Such a war would risk escalation and direct conflict with Russia. Please join us in protesting war, in particular a war against Syria.  KZ

Call for Veterans and GI’s to Resist Illegal Orders

A leading veterans’ organization is warning that a U.S. attack on Syria could lead to a nuclear war. Russian military forces in Syria will undoubtedly be among the targets of U.S. missiles.  Russia has said it will shoot down U.S. missiles, and attack the “platforms from which they are fired,” i.e. U.S. ships.

“Why the rush to war?” asked Gerry Condon, president of Veterans For Peace.  “Why is the mass media cheerleading for war instead of asking hard questions? Why are Democratic and Republican politicians trying to out-do one another with calls for ever more massive attacks on Syria?

“There is no proof yet of a Syrian government gas attack, only a video made by a fundamentalist rebel group that wants more U.S. intervention.  Even if the reports are true, a military response will only lead to more death and destruction, and dangerous escalations.

“We are talking about a direct confrontation between the two nuclear superpowers,” said Gerry Condon. “Why would the U.S. risk nuclear war over dubious chemical weapons claims?

“Veterans have longer memories than the press and the politicians,” said Condon.  “We remember how we were lied into the Iraq War with false reports of ‘weapons of mass destruction.’ U.S. wars throughout the Middle East have caused millions of deaths and destroyed entire societies.  Our soldiers and their families have also paid an extremely high price.”

“Veterans, GI’s and their families will not accept another war based on lies,” said Gerry Condon.  “We will be protesting in the streets, in the suites, at media outlets and at military bases.

All military personnel, from low ranking GI’s to the top generals and admirals, have an obligation to disobey illegal orders.  Orders to carry out acts of war against a sovereign nation that is not threatening the U.S. are illegal orders.

“We swore an oath to defend the Constitution from all enemies, foreign and domestic,” said Gerry Condon, president of Veterans For Peace. “Right now those enemies are those who would rush our country recklessly into another devastating war.”