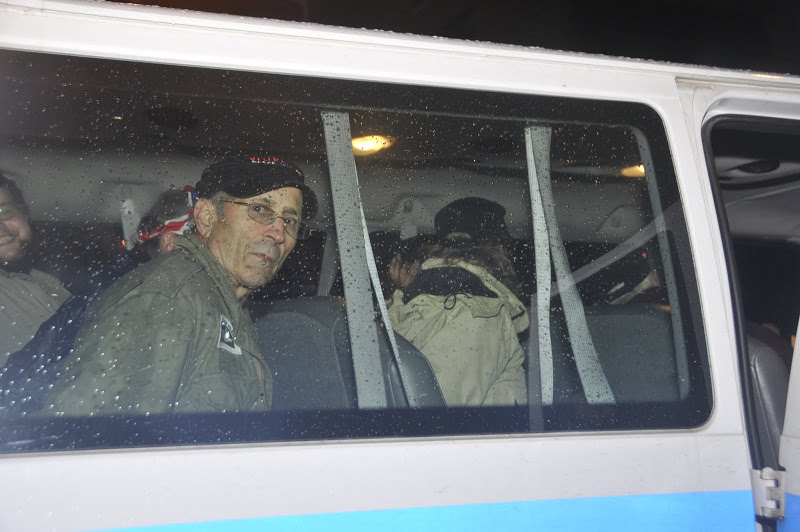 Veterans Who Fought for Liberty Forced to Fight Again

Above: Vets under arrest in bus after reading names of people who died in war at Vietnam Veterans Memorial in New York City, October 7, 2012, by Ellen Davidson.

Freedom of Assembly on Trial in NYC

“Congress shall make no law… abridging… the right of the people peaceably to assemble….” – First Amendment to the Constitution of the United States

Trial began this week in Manhattan for 14 U.S. military veterans and their supporters arrested last fall at New York City’s Vietnam Veterans Memorial. Charges include trespassing, failure to comply with a park sign and remaining at the memorial past closing time. The group had stayed beyond a 10:00 p.m. park curfew to continue the reading of the names of American soldiers killed in Vietnam, Iraq and Afghanistan.

By all accounts the 6:00 p.m. gathering on October 7, 2012, at Vietnam Veterans Memorial Plaza on Water Street was orderly and peaceful.

Combat veterans like Rev. George Packard, retired Bishop for the Armed Forces of the Episcopal Church, and Pulitzer Prize-winning war correspondent Chris Hedges addressed an audience of 40 or so veterans and their supporters, calling for the immediate withdrawal of American troops from Afghanistan.

Speeches were followed by the laying of floral tributes at the memorial and the reading of the names of the fallen. At 10:15 pm, the police informed the group that the memorial was officially closed and that if they remained they would be arrested. Many chose to continue reading names and laying flowers until they were handcuffed and taken away. One of those arrested was an 85-year-old Word War II Army combat veteran.

With an opportunity to honor those who gave their lives in protection of our liberty and uphold the First Amendment protections of those gathered to remember them, Mayor Michael Bloomberg and the leadership of the New York Police Department chose instead to make arrests, that determination having been clearly made hours earlier, with squad cars beginning to line up along Water Street before 8:30 p.m.

The defendants rejected conditional dismissal by prosecutors and are fighting the case on the grounds that the curfew was arbitrarily enforced and that municipal park regulations should not supersede constitutional and international human rights to speech and assembly.

The 10:00 p.m. park curfew, incidentally, had been imposed earlier in the year as part of the city’s response to Occupy Wall Street protests. Many of those now on trial will refuse, if convicted, to pay a fine, do community service or acknowledge any wrongdoing and will do jail time if necessary to stand up for the Freedom of Assembly.

The defendants are being represented by attorneys from the National Lawyers Guild-NYC, who argue in a brief that “the memorial is in constant use by pedestrians, dog walkers and other people after 10 p.m.,” and that the veterans “were in fact singled out for arrest precisely because of their First Amendment-protected activities.”

Defense attorney Martin R. Stolar characterized the police behavior as “morally outrageous” and has stated, “Legally, we believe [the defendants’ actions] will be protected by the First Amendment.” Another lawyer for the defendants, Jonathan Wallace, called the event at the veterans memorial “the core of what the First Amendment was designed to protect.”

One of the defendants, Veterans for Peace activist Tarak Kauff, posits the question: “Can you imagine if there were an independent-thinking judge who saw his or her duty to actually protect the Constitution, specifically, the First Amendment?  The prosecution reads the charges, describing the circumstances of our arrest. I can just picture the judge: ‘Wait, are you serious? These veterans were arrested while laying flowers at a veterans’ memorial? Were they disturbing the peace, desecrating property, using illegal substances?’ ‘No, your honor.’ ‘Then what in God’s name are they doing in this court? Have the police nothing better to do?’”