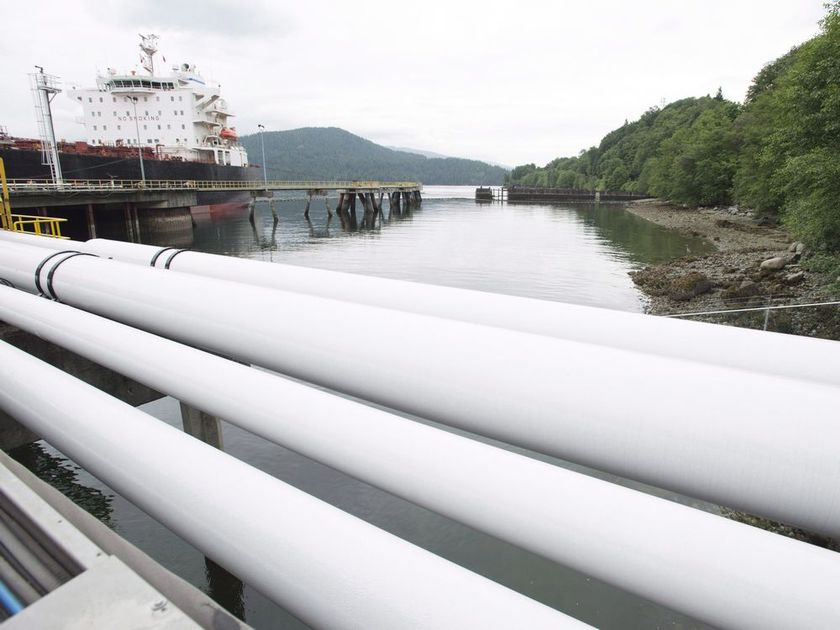 ‘Victory For All Of Us’: Federal Court Of Appeal Quashes Approval Of $9.3-Billion Oil Pipeline Expansion

Above Photo: From vancouversun.com

As First Nations and environmentalists celebrated Thursday’s Federal Court of Appeal decision, one thing’s clear: More delay and higher costs if the pipeline expansion does go ahead.

As First Nations and environmentalists celebrated Thursday’s Federal Court of Appeal decision to quash approval of the $9.3-billion Trans Mountain oil pipeline expansion, one thing is clear: More delay and higher costs if the project does go ahead.

In a unanimous decision, the court found that Canada had not adequately consulted each of six First Nations that had challenged the project’s approval.

The three-judge court, in its 263-page decision written by judge Eleanor Dawson, also found the scope of the National Energy Board’s review “unjustifiably” did not include tanker traffic related to the project, which will have a negative effect on endangered killer whales, also known as orcas.

The project has been hugely controversial in British Columbia, particularly in the Lower Mainland, where there have been years of protest, rallies and most recently arrests.

Also on Thursday, Houston, Texas-based Kinder Morgan announced that shareholders had approved the $4.5-billion sale of the expansion project and existing Trans Mountain pipeline to Canada. Kinder Morgan had balked at continuing to build the project because of opposition in B.C., particularly from the NDP government that came to power in 2017, so Canada announced in May a deal to buy Trans Mountain.

In responding to the decision during a news conference, federal Finance Minister Bill Morneau reiterated that his government believes the Trans Mountain expansion is in the national interest, saying the court decision and Kinder Morgan shareholder approval “are important steps in getting this project built in the right way for the benefit of all Canadians.”

For his part, Prime Minister Justin Trudeau said on Twitter: “Today I spoke with Premier Rachel Notley⁩ — and reassured her that the federal government stands by the TMX expansion project and will ensure it moves forward in the right way.”

Notley called on the federal government to immediately appeal the ruling to the Supreme Court of Canada. She said Trudeau must also call an emergency session of Parliament to fix the process so that the pipeline can be built.

Until that happens, Notley said Alberta will remain outside the federal climate plan.

Some First Nations and environmental groups, however, called for the Trudeau government to abandon the project in the face of the sweeping federal court decision.

Added Reuben George, a Tsleil-Waututh member who had helped lead the pipeline fight: “It’s a proud moment for us as indigenous people across the country … Little nations came together and created victory and this is a victory for all of us.”

The Squamish Nation said the court decision reinforces its belief the project must not proceed. “We tell the prime minister to start listening and put an end to this type of relationship,” said Khelsilem, also known as Dustin Rivers, a councillor and spokesperson for the Squamish Nation.

Morneau had no immediate answer on whether Ottawa would appeal the decision to the Supreme Court of Canada or adhere to its finding and begin consultations and re-examine the effects of tanker traffic, which could involve new regulatory hearings.

Tanker traffic will increase nearly seven-fold with tripling of capacity of the pipeline meant to open up new Asian markets to the Alberta oilsands and provide diversification from U.S. markets.

Energy industry consultant Ed Kallio said regardless of what the federal government decides, it will delay construction and increase costs.

On Thursday, the Trans Mountain-company said in a statement it was taking measures to suspend construction related activities in a safe and orderly manner.

Kallio, principle of Calgary-based Eau Claire Energy Advisory Inc., said construction delays can mean inflationary costs and sunset clauses on contracts that have to be renegotiated.

There is also the issue of what kind of additional marine review would be required, something that could be long and drawn out, and whether First Nations could be satisfied in further consultations, observed Kallio. “Does that mean the project can’t be built?” he queried.

University of Saskatchewan law professor Dwight Newman said he was surprised by the ruling, surmising the federal government would have learned lessons from inadequate consultations on Enbridge’s $6.8-billion Northern Gateway oil pipeline project. A federal court in 2016 quashed its approval for similar reasons.

Newman, who holds a Canada Research Chair in Indigenous rights at the University of Saskatchewan, also said that either appealing or renewing consultations “wasn’t the fastest way to move things ahead.”

In its decision, the federal court cited numerous instances where there was no meaningful two-way dialogue with First Nations or consideration of mitigation measures, including a request by the Cold Water Indian Band to reroute the pipeline away from an aquifer.

The court also said Canada had no meaningful response to the Squamish Nation’s concern too little was known about how diluted bitumen would behave if spilled and that this uncertainty made it premature to approve the project.

And the federal court said while Canada’s implementation of an Indigenous advisory monitoring committee and a $1.5-billion oceans protection plan was “laudable,” these initiatives were ill-defined because they were in an early planning stage and could not accommodate or mitigate any First Nations’ concerns when the project was approved.

Supporters of the project, including B.C. businesses and some unions, were stunned by Thursday’s decision.

“This is troubling at many levels, for Greater Vancouver, British Columbia, and all of Canada,” said Iain Black, president and CEO of the Greater Vancouver Board of Trade. “This project was approved two years ago by the federal government, following the most rigorous process and environmental assessment in this country’s history.

“To overturn that decision sets a dangerous precedent and once again calls into question Canada’s ability to get any major project built, and/or responsibly develop our natural resources.”

The project has also been supported by some First Nations whom are among 33 First Nations in B.C. and another 10 in Alberta who have already signed benefit agreements for the project valued at $400 million.

Those First Nations were quiet on Thursday.

B.C. Premier John Horgan praised the ruling as a victory for First Nations and environmental opponents, and credited the resolve of the Tsleil-Waututh Nation for taking the lead on the challenge.

“Today is a victory for the Tsleil-Waututh and I’m very proud they stood fast and made their case and were successful,” Horgan told reporters at the legislature in Victoria.

B.C. will nonetheless proceed with its court reference case that seeks to clarify if it has the jurisdiction to restrict oil flows in pipelines that cross its borders. “My view today… is that our reference case establishing jurisdiction not just for this government but for future B.C. governments is still important,” he said.

“I feel today vindicated in that the judgment that came forth cited the inadmissible flaw associated with in particular the way the NEB had assessed marine shipping,” he said.

But Weaver called it a waste of resources that First Nations had to fight the government.

“I suspect we’re going to see this project kicked down the road past the next federal election and it will quietly die the death of 1,000 paper cuts,” he said.

October 1953: The Trans Mountain pipeline begins shipping oil with an initial capacity of 150,000 barrels per day. The project features four pump stations along its 1,150-kilometre route and a marine dock that connects loading facilities on the east side of Edmonton with ocean tankers in Burnaby.

1957: Pipeline capacity is expanded via the construction of a 160-km pipeline loop. The Westridge Marine Terminal is built and commissioned in Burnaby.

Feb. 21, 2012: Kinder Morgan says it wants to expand the Trans Mountain pipeline after receiving support from oil shippers and will begin public consultations.

Dec. 16, 2013: An application is made to the National Energy Board (NEB) to expand the Trans Mountain pipeline. Construction is proposed to begin in 2017, with the aim of having oil flow through the expansion by December 2019.

November 2014: More than 100 people are arrested after they camp out in a conservation area on Burnaby Mountain to block crews from conducting drilling and survey work related to the pipeline expansion. Most of the charges are later dropped.

August 2015: The NEB postpones public hearings after striking from the record economic evidence prepared by a Kinder Morgan consultant who was to begin working for the regulator.

Jan. 12, 2016: Alberta Premier Rachel Notley says in a written submission to the NEB that the Trans Mountain pipeline expansion is in the best interests of both Alberta and Canada.

Jan. 27, 2016: The federal Liberal government says pipeline projects such as the Trans Mountain expansion will now be assessed in part on the greenhouse gas emissions produced in the extraction and processing of the oil they carry. Proponents will also be required to improve consultations with First Nations.

May 17, 2016: Ottawa appoints a three-member panel to conduct an environmental review of the Trans Mountain expansion project.

May 29, 2016: The NEB recommends approval of the pipeline, subject to 157 conditions, concluding that it is in the public interest.

Jan. 11, 2017: B.C. Premier Christy Clark announces her support for the project, saying Kinder Morgan has met five government conditions including a revenue-sharing agreement worth up to $1 billion.

May 15, 2017: The Federal Court of Appeal grants Notley’s government intervener status in a lawsuit filed by municipalities and First Nations against the project.

May 25, 2017: Kinder Morgan makes its final investment decision to proceed with the development, now estimated to cost $7.4 billion, subject to the successful public offering of Kinder Morgan Canada.

May 29, 2017: The B.C. NDP and Greens agree to form a coalition to topple the Liberal party, which won a minority government in an election earlier in the month. The parties agree to “immediately employ every tool available” to stop the project.

May 30, 2017: Kinder Morgan Canada debuts on the Toronto Stock Exchange after a $1.75-billion public offering.

Aug. 10, 2017: The B.C. NDP government hires former judge Thomas Berger to provide legal advice as it seeks intervener status in the legal challenges against the project filed by municipalities and First Nations.

Oct. 26, 2017: Kinder Morgan Canada asks NEB to allow work to begin despite a failure to obtain municipal permits from the City of Burnaby.

Jan. 17, 2018: Kinder Morgan Canada warns the Trans Mountain expansion project could be a year behind schedule.

Jan. 30, 2018: B.C. government moves to restrict any increase in diluted bitumen shipments until it conducts more spill response studies, a move that increases the uncertainty for Trans Mountain.

March 27, 2018: City of Burnaby says it will file an appeal to the Supreme Court in connection with the Federal Court of Appeal ruling.

April 8, 2018: Kinder Morgan Canada suspends non-essential spending on the Trans Mountain expansion project and sets a May 31 deadline to reach agreements with stakeholders.

May 29, 2018: Federal government announces deal to buy the Trans Mountain pipeline and expansion project from Kinder Morgan Canada for $4.5 billion.

Aug. 23, 2018: The Supreme Court dismisses an appeal by the City of Burnaby to reconsider a lower court decision that denied the port city leave to appeal the ruling by the National Energy Board.

Aug. 30, 2018: The Federal Court of Appeal overturns the Trudeau government’s approval of the contentious Trans Mountain pipeline expansion. In a unanimous decision by a panel of three judges, the court says the NEB’s review of the project was so flawed that the federal government could not rely on it as a basis for its decision to approve the expansion.

View this document on Scribd