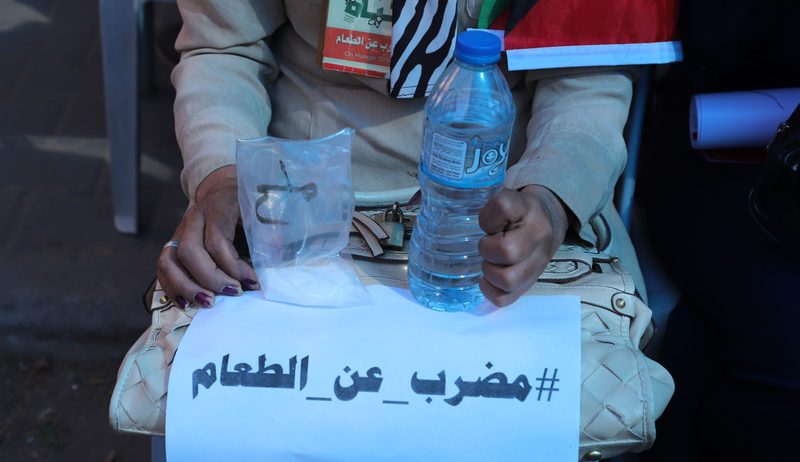 Victory For Palestinian Hunger Striker After 113 Days Without Food

Israel agreed on Thursday to release a hunger-striking prisoner in four months after lengthy negotiations.

Miqdad Qawasmeh suspended his hunger strike on Thursday after refusing food for 113 days to protest his detention without charge or trial after Israel agreed to release him in February 2022.

His victory came after lengthy and arduous negotiations between the leadership of the Hamas prisoners’ group and Israeli authorities.

The 24-year-old was the youngest of six Palestinian men who have been refusing food for weeks and months in protest of Israel’s detention of them without charge or trial.

Five others are still fighting for their freedom on empty stomachs.

Kayed Fasfous, a 32-year-old father of seven, has been on a hunger strike for more than 120 days as of this writing.

Fasfous is protesting his administrative detention and is determined to continue his strike until he is unconditionally released. He is from the village of Dura, near the southern West Bank city of Hebron.

The practice of administrative detention – detention without charge or trial that can be extended, in theory, indefinitely – is a direct continuation of practices under British colonial rule and may constitute a war crime, according to human rights organizations.

“Israel has created a Kafkaesque legal reality for Palestinians,” Israeli human rights group B’Tselem said, “imprisoning hundreds without trial for an indefinite period of time on the grounds that they intend to commit a future offense.”

Israeli judges “approve the vast majority of them, merely lending the proceedings a veneer of respectability and a semblance of judicial oversight.”

Despite not indicting Fasfous for a crime and his condition drastically deteriorating, Israel is refusing to release him.

Instead, Israel’s highest court has once again “suspended” his administrative detention order on 4 November.

Such suspensions, used by the court at least since 2015, effectively change nothing for the prisoner. It is merely a transfer of custody from Israel’s prison authorities to the hospital’s security apparatus.

The men remain prisoners – they can’t leave the hospital and return to their homes. They can’t even switch hospitals without Israeli approval.

The only difference is that family members can visit their imprisoned relatives at the hospital.

Israel’s highest court resorts to these “suspensions” to divert attention from Israel’s direct responsibility for the lives of hunger strikers, while also maintaining the appearance that it has not acceded to the demands of the strikers.

B’Tselem previously called this strategy “an interpretive solution invented by the high court in order to avoid reaching a decision on – and taking responsibility for – administrative detainees on the verge of death.”

The Palestinian Prisoners Club said that Israel’s resort to this strategy has been shifting in recent weeks.

The group said Israeli authorities refused to suspend the administrative order of Alaa al-Araj in order to send him to hospital, even when his health was seriously deteriorating.

Al-Araj has been refusing food for more than 95 days.

His lawyer told the Palestinian Prisoners Club that the Israeli military prosectors said they have a list of accusations against al-Araj that his lawyers will be able to look at on Thursday.

Al-Araj is still refusing food from his jailers at the Ramle prison clinic, dubbed the “slaughterhouse” by prisoners, due to its inadequacy as a medical facility. He is often transferred to hospital as his health condition deteriorates.

Al-Araj, 34, is a civil engineer and father of a five-year-old from the northern West Bank city of Tulkarm.

Hisham Abu Hawasheh, 39, has been refusing food for more than 80 days. His health is deteriorating as Israeli prison authorities transfer him between the Ramle prison clinic and the hospital.

Hawasheh is a father of five and also from Dura.

Ayad al-Harimi, 28, has been on hunger strike for around 50 days. Al-Harimi is from the occupied West Bank city of Bethlehem.

Luai al-Ashqar, 45, has been on hunger strike for more than 30 days. He is a father of eight from the town of Seida in the Tulkarm governorate.

Out of a total 4,650 political prisoners, as of November, Israel was holding 500 in administrative detention.

Since the beginning of 2021, over 60 Palestinians have been on hunger strikes to protest being imprisoned by Israel without charge or trial.