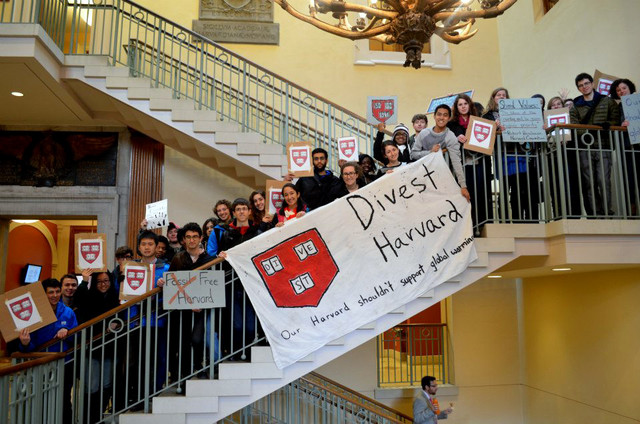 Six months after saying the endowment was off limits, Harvard takes a number of steps towards fossil fuel divestment

Cambridge, MA – April 8 – After months of resisting student and alumni demands for fossil fuel divestment, Harvard University announced yesterday that they would be taking a number of new steps to address climate change and their investment portfolio.

“A year ago Harvard was no way no how. But science is pushing everyone in the direction of action; students should be proud they’ve breached the dam of resistance,” said Bill McKibben, a Harvard graduate and founder of 350.org, which helps coordinate the fossil fuel divestment movement.

In a letter to the Harvard Community on Monday, President Drew Faust wrote, “In addition to our academic work and our greenhouse gas reduction efforts, Harvard has a role to play as a long-term investor.”

Harvard will join the Carbon Disclosure Project, an effort to push corporations to disclose their carbon footprint. The university will also sign onto the UN-backed Principles for Responsible Investment, which will require the endowment to report on how they are meeting a number of investment indicators.

“Both these significant steps underscore our growing efforts to consider environmental, social and governance issues among the many factors that inform our investment decision-making,” wrote Faust.

The university also pledged to continue to reduce its greenhouse gas emissions and challenged alumni and donors to join the university in establishing a $20 million Climate Change Solutions Fund to “seed and spur innovative approaches to confronting climate change.”

While students with Divest Harvard are encouraged by the impact they are making on the university, they were quick to point out the inconsistencies with the university’s new approach and pledged to keep up pressure for full fossil fuel divestment.

“We’re glad that Harvard has recognized the need to align its investments with its values,” wrote Divest Harvard in a statement. “However, there are still inconsistencies in Harvard’s investments. Harvard’s decision to invest in climate solutions is an important step forward, but the truth is that we still have $32.6 million directly invested–and millions more indirectly invested–in the fossil fuel industry’s climate destruction, science denialism, and political obstruction. We need to divest from the problem as we invest in new solutions.”

Divestment advocates were also quick to point out that the type of shareholder advocacy represented by the Carbon Disclosure project was unlikely to convince fossil fuel companies to make the fundamental changes to their business plans necessary to avert catastrophic climate change. As evidence, they pointed to ExxonMobil, which after shareholder pressure announced last week that it is still intent burning all of its hydrocarbon reserves.

“We’ve never thought that there was a small flaw in their business plan that could be altered by negotiation; we’ve always thought their business plan was to keep pouring carbon into the atmosphere,” wrote Bill McKibben in the Guardian in reaction to the news. “And indeed Exxon’s statements are easy to translate: ‘We plan on overheating the planet, we think we have the political muscle to keep doing it, and we dare you to stop it.’ And they’re right — unless we build a big and powerful movement, they’ll continue to dominate our political life and keep change from ever taking place.”

The fossil fuel divestment movement has spread to over 500 universities, cities, states, and religious institutions across the United States, Europe, Australia and New Zealand. Nine colleges, more than 20 cities, numerous religious institutions, and a coalition of seventeen foundations controlling nearly $1.8 billion in investments have committed to some form of divestment.

350 is the red line for human beings, the most important number on the planet. The most recent science tells us that unless we can reduce the amount of carbon dioxide in the atmosphere to 350 parts per million, we will cause huge and irreversible damage to the earth. But solutions exist. All around the world, a movement is building to take on the climate crisis, to get humanity out of the danger zone and below 350. This movement is massive, it is diverse, and it is visionary. We are activists, scholars, and scientists. We are leaders in our businesses, our churches, our governments, and our schools. We are clean energy advocates, forward-thinking politicians, and fearless revolutionaries. And we are united around the world, driven to make our planet livable for all who come after us.