Note: Thanks to Sue Kirby who let us know about this important victory against a pipeline planned for Massachusetts. She writes:

“I don’t  know if people have been following what is happening here in Massachusetts but Kinder Morgan planned to build a gas pipeline across Massachusetts to feed the gas frenzy in New England. There has been tremendous resistance especially from landowners and the cities and towns in Western Mass.  KM just announced that it will abandon their plans to build the pipeline in Massachusetts. They will try to go across Southern NH. Now the people in NH are getting organized to stop them up there.”

And yes, we have been following the protests in Massachusetts. We loved their rolling protest across the state, followed it regularly, up to its conclusion in the Boston Commons and promoted it before it started. Great to see their success, now let’s stop Kinder Morgan in New Hampshire.

Stung by intense local opposition to a proposed natural gas pipeline winding through western and central Massachusetts, a Houston energy company said Friday that it will pursue an alternative route that bypasses many Massachusetts communities by veering north and shooting across southern New Hampshire.

Kinder Morgan Inc. said much of the alternative path would follow existing rights-of-way along utility lines in the two states, meaning it would cross fewer residential properties and undeveloped lands. Kinder Morgan plans to file the new route on Monday with the Federal Energy Regulatory Commission, which has final say on gas pipelines in New England.

Kinder Morgan officials said that 14 Massachusetts towns along the northern tier of the state, from Dracut to Northfield will no longer be in the pipeline’s path. But the pipeline would cross four new Massachusetts towns: Cheshire, Hancock, Lanesborough, and Shelburne, and a southern stretch of New Hampshire. 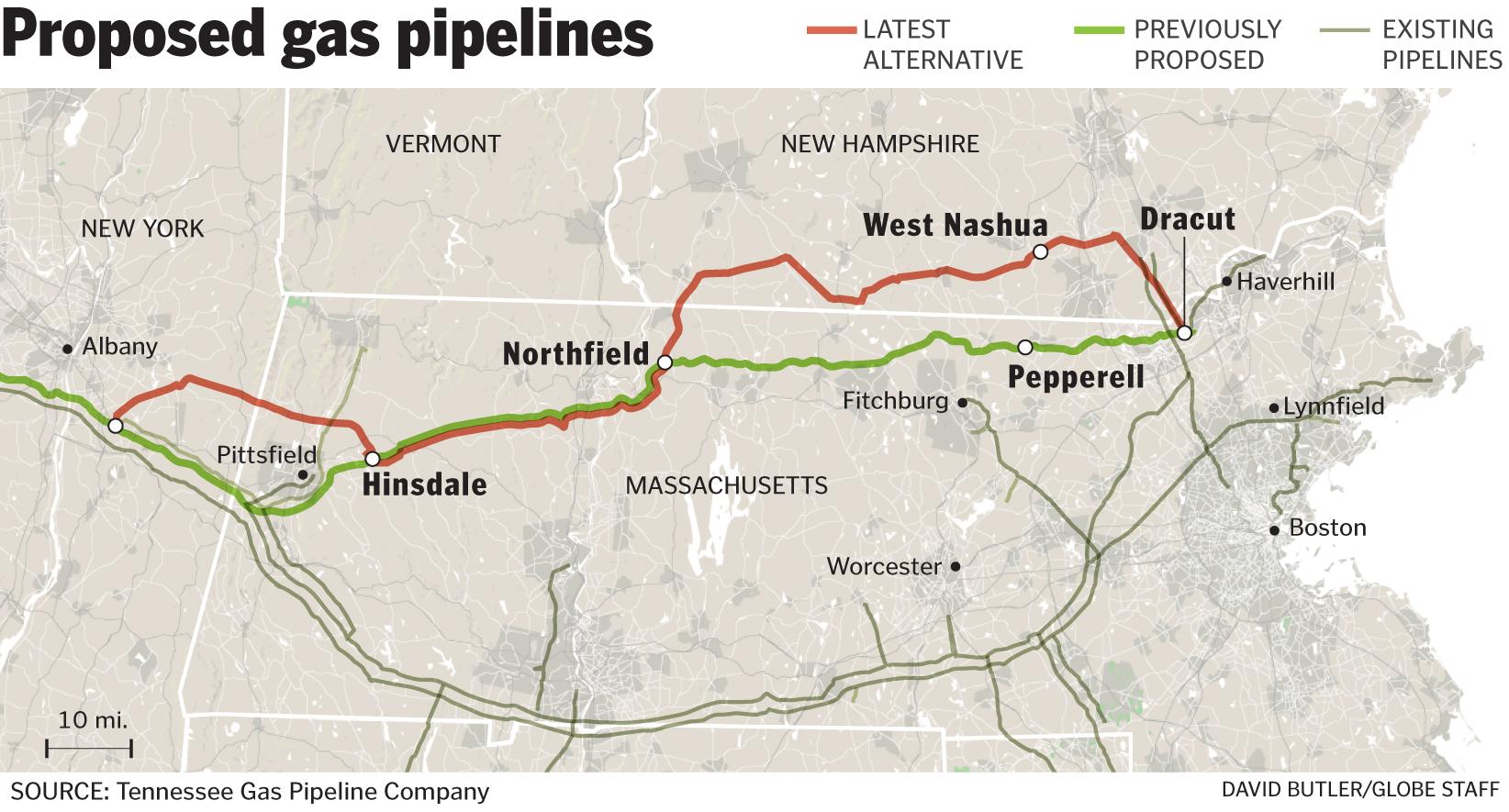 That shortage has led to skyrocketing electric rates this winter in Massachusetts since most power plants use natural gas to generate electricity. The company hopes to have the pipeline operating by late 2018. 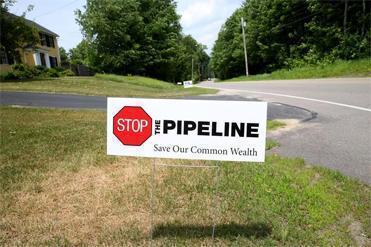 Kinder Morgan’s first pipeline proposal met widespread opposition from residents, environmentalists, and politicians who argued the pipeline would needlessly rip up private yards, parks, forests, and other properties along its path through about 45 communities. But if Kinder Morgan’s goal is to lessen opposition by proposing a new route, it may have miscalculated.

Diane Hewitt, a member of the Stop the Pipeline Coordinating Committee in Groton, said she and other critics will still oppose Kinder Morgan’s plans, even though the proposed pipeline would no longer go through Groton. She added that her group is already in contact with New Hemisphere residents, where a meeting to fight the pipeline is planned for later this month.

“It doesn’t change people’s minds,” said Hewitt. “It still begs the question whether the pipeline is even needed.”

Kinder Morgan’s alternative would still entail 64 miles of new pipeline in Massachusetts, starting along the New York border in Hancock, then snaking its way through Hinsdale and northwest to Northfield.

The alternative pipeline would then head into southern New Hampshire, running east along existing electric and natural gas corridors, before dipping back into Massachusetts near Dracut, according to Kinder Morgan. The New Hampshire section of the main pipeline would stretch 70 miles through 17 communities, the company said.

“We haven’t authorized the use of our rights-of-way, nor have we taken a position on their proposal,” said Mike Durand, the spokesman.

Allen Fore, a spokesman for Kinder Morgan, expressed confidence that the company can work out a deal with Northeast Utilities. He also acknowledged that fierce local opposition drove Kinder Morgan’s decision to go with an alternative plan.

“We have heard and we have listened,” said Fore. Ideally, he said, Kinder Morgan would like to start construction on the pipeline in 2017.

Doug Whitbeck, a resident of Mason, N.H., said he opposed the first Kinder Morgan plan because it was so close to New Hampshire and thought it was a bad idea for the entire region. Whitbeck, a retired technical writer, is helping to organize a Dec. 13 informational meeting in Mason about Kinder Morgan’s latest plan.

Whitbeck said the reasons for opposing the pipeline in “live free or die” New Hampshire may be different than in more liberal Massachusetts, but opposition could be just as strong.

“There’s a lot of people up here who may not be as concerned about climate change, but they do very much care about property rights,” said Whitbeck.

Kinder Morgan has not ruled out isolated cases of eminent domain property takings, although Fore stressed that 90 percent of the main pipeline through New Hampshire would be on or near transmission-line rights-of-way owned by utilities.

William Hinkle, a spokesman for New Hampshire Governor Maggie Hassan, said in a statement that rising energy costs are a major concern and Hassan is exploring ways to bring more natural gas into the state. But she has not embraced Kinder Morgan’s plan.

“Governor Hassan will continue to urge the company to listen to communities, take steps to reduce impacts, and ensure local benefits,” said Hinkle.

In Massachusetts, Governor-elect Charlie Baker came out against the Kinder Morgan’s original proposal during his campaign, saying that its impact on communities was too great and he favored increasing capacity on existing pipelines. This week, a spokesman said Baker will review the new Kinder Morgan plan after he takes office in January.