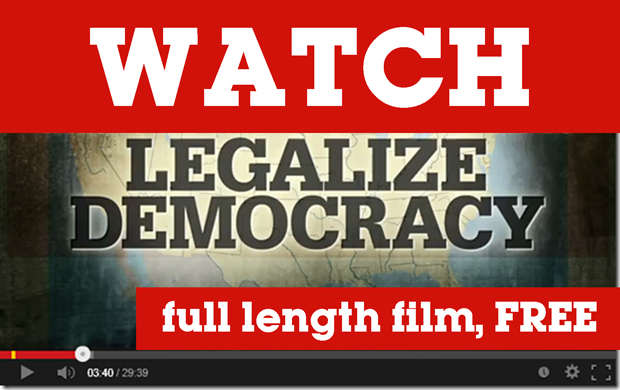 Legalize Democracy is a documentary film by Dennis Trainor, Jr. (American Autumn: an Occudoc) about the movement to amend — why it is needed, and how you can get involved, placing the response to corporate coup of our government in the context of the growing Democracy movement emerging right here and right now.

Combining interviews with Move To Amend’s national leadership team, with archival footage, and dynamic animated time lines that tell the stories of the Supreme Court cases that shaped the doctrine of “corporate personhood”, the rights guaranteed by amendments fought for by people’s movements, and the intersection of law and culture that codified and created discrimination based on race.

Move To Amend
Formed in September 2009, Move to Amend is a coalition of hundreds of organizations and hundreds of thousands of individuals committed to social and economic justice, ending corporate rule, and building a vibrant democracy that is genuinely accountable to the people, not corporate interests. We are calling for an amendment to the US Constitution to unequivocally state that inalienable rights belong to human beings only, and that money is not a form of protected free speech under the First Amendment and can be regulated in political campaigns.

Dennis Trainor, Jr. (director) is a writer, director and new media activist. He directed the critically acclaimed documentary the Occupy Wall Street movement, American Autumn: an Occudoc (“calm and smart, offsetting its stridency with discussion, music, even humor, while issuing a call to arms.”- New York Times ; “as well made as any Hollywood blockbuster.”- MichaelMoore.com ). Currently, her serves as the producer and host of The Resistance Report, which can be seen daily at PopularResistance.org . His work has been featured on many outlets including Truth Out, Huffington Post, Op-Ed News, Fire Dog Lake, The Real News Network, and many others.