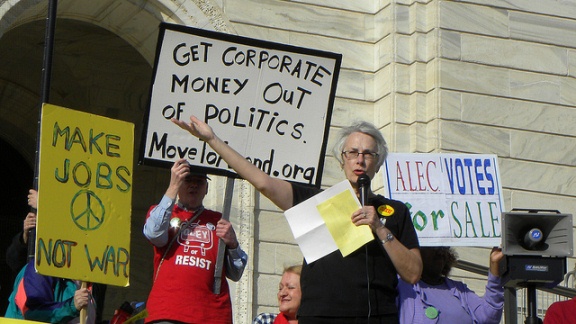 The Chicago Moral Monday Coalition, an alliance of Chicago clergy, lay people, unions and community organizations, has just taken over the lobby of the Palmer House Hilton, at 17 E. Monroe St., to protest the American Legislative Exchange Council (ALEC), which is slated to meet at the hotel this Wednesday for its 40th annual national conference. The Coalition is demanding that the Palmer House rescind its invitation to ALEC. Numerous Coalition members intend to risk arrest should the hotel not meet their demand, in order to raise awareness of the backroom deals ALEC makes with legislators, and demand ALEC be held accountable. A press conference will immediately follow the action, at the Monroe Street entrance.

“ALEC is one of the great nexi where money and politics meet in order to corrupt our democracy. ALEC brings together corporate lobbyists and state legislators in order to vote behind closed doors on corporate-authored ‘model legislation’,’” said Greg Goodman, protest organizer.

ALEC model legislation includes “voter ID” laws, which facilitate unlimited spending by private interests in political elections, “right to work” laws, designed to repeal the minimum wage, laws that prevent the filing of class action lawsuits against corporations and employers, laws that eliminate mandated health benefits and other benefits for workers, laws that create new tax havens for corporations and the wealthy, laws that facilitate the diversion of public funds from public to private and charter schools, laws that limit the ability of government to regulate pollution and that repeal existing environmental protections, laws that facilitate the construction of for-profit prisons, laws that increase penalties for drug and other offense, laws that force juveniles to be tried as adults, laws that encourage racial and ethnic profiling in the policing of immigration, and the controversial “stand your ground” law.

“ALEC promotes the interests of Big Business and the 1% while actively working to disenfranchise ordinary people, erode workers rights, gut the social safety net, destroy the environment, eliminate corporate liability, criminalize poverty and immigration, privatize the public goods and inject even more money into our political system, drowning out the voices and rights of the people,” Goodman said.

The Chicago Moral Monday Coalition takes its name from the series of ongoing weekly protests in North Carolina.

“Over the last three months, more than 900 North Carolinians have been arrested, and thousands upon thousands more have rallied to support them. Our brothers and sisters in Raleigh have been protesting cuts to public education and assaults on labor, attacks on Medicaid, unemployment and other social programs, and disenfranchisement through restrictive voter ID laws,” said Chicago Moral Monday Coalition member Rev Marilyn Pagán-Banks, United Church of Christ.

“While Moral Monday activists and community members have been targeting their state legislators, most of these new laws were originally written by ALEC. As North Carolinians take their protest to Ashville today to follow their congresspeople home after the end of the legislative session, we join them in solidarity as we take the Moral Monday protest to the authors of these and other immoral laws in Chicago,” said Rev Pagán-Banks.

Moral Monday against ALEC debuts a week of action against the model-legislation manufacturer.

“Our fight against ALEC is just beginning. We want everyone in Chicago to know what ALEC stands for and how they are destroying our rights. We are calling on the citizens of Chicago to  demand Palmer House rescind its invitation and for ALEC to leave town, knowing its corporate-drafted laws aren’t welcome here,” said Natalie Wahlberg, organizer.